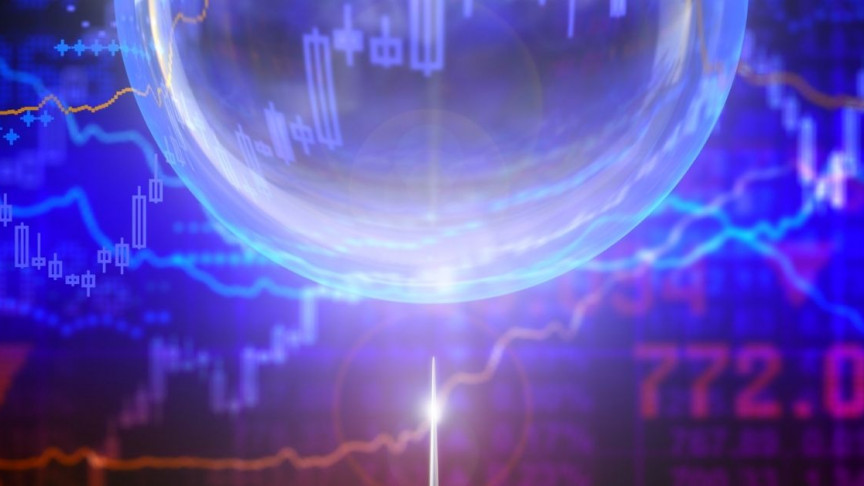 Since investors pushed the GameStop stock price up from $3.30 in the summer of 2019 to a high of $483, many experts have warned about the possibility of a stock market bubble. And as house prices in many areas continue to rise — despite the pandemic’s effect on the housing market — more experts have said that we are also in the middle of a real estate bubble.

The recent run-up in the share price of some stocks, including GameStop, AMC Entertainment, and American Airlines, has gained the name “meme stock bubble.” The Merriam Webster dictionary defines a meme as “an idea, behavior, style, or usage that spreads from person to person within a culture.” Stocks are already a shared form of agreement or disagreement of the financial prospects of a company or business deal, so bringing them together is like pouring gasoline on the fire.

More than a year ago, an employee of the Massachusetts Mutual Life Insurance Company named Keith Gill — who goes by the name Roaring Kitty on his YouTube channel — Gill first began promoting buying GameStop stock.

However, it was on a then-obscure subreddit, r/wallstreetbets, that the idea gained traction. Reddit is a colossal collection of online forums where people often share links and content before it enters the news cycle. Reddit bills itself as the “front page of the internet,” a boast that’s not empty since, according to the ranking site Alexa, Reddit.com currently ranks #7 in popularity in the U.S.

On the wallstreetbets subreddit, individual investors — known as retail investors — developed a plan to create a “short squeeze” on stocks that were being “shorted” by some of Wall Street’s heavy-hitters — hedge funds. Shorting a stock involves a process that starts when a buyer thinks a stock’s price is likely to go down. The buyer borrows shares of that stock from a broker, and immediately sells them.

Crucially, the buyer must eventually return the shares they borrowed to the broker after a certain period. So, at the end of the loan period, they buy the same number of shares originally borrowed, returns the shares to the broker, and — if the share price has gone down — pockets the difference between what the (lower, hopefully) buying price and the old one, for which they were originally sold.

This is the “squeeze” — the short seller is stuck in a situation where they need the share prices to fall, but instead, they are forced higher.

History is replete with asset bubbles

However, it was Robinhood Markets, Inc. that spurred the stock meme bubble. Founded in March 2015, Robinhood offers commission-free trading of stocks and exchange-traded funds (ETFs) via a mobile app. Retail investors used Robinhood to buy up shares of stocks being shorted, and they also used it to buy silver ETFs, to counter those who had shorted the commodity.

While its name implies it “steals from the rich and gives to the poor,” in reality, Robinhood pockets a profit via earning interest on customers’ cash balances. It also practices margin lending, and — most controversially — by selling information about the retail investment purchasing behavior to high-frequency traders. This last practice prompted the Securities and Exchange Commission (SEC) to open an investigation into the company in September 2020.

Asset bubbles of the past didn’t have YouTube, Reddit, and Robinhood to get them started. But they all share similarities to the meme stock bubble — following the pattern of precipitous rises, sudden falls, and the “irrational exuberance” of small investors who lack intel on the bigger picture.

During the 17th century, the Dutch Republic had the world’s highest per-capita income and it loomed large as a major financial power. But when Dutch botanist Carolus Clusius introduced tulips — which came from Turkey — they became an instant status symbol for Holland’s newly-wealthy merchant class.

Most prized were tulips having yellow or white streaks on a red, brown or purple background, and these were called “Bizarden.” At the very pinnacle stood the prized Semper Augustus tulip.

During the winter months — when the tulip bulbs couldn’t be moved — buyers and sellers entered into contracts stating an intent to purchase the bulbs at a certain price and on a certain date, thus becoming some of the world’s first future-oriented contracts. Then, speculators got involved, often trading the same tulip contract over ten times a day, inflating the prices to astronomic heights.

However, in February 1637, bubonic plague appeared in the Dutch town of Haarlem, and buyers understandably didn’t show up to the tulip auction there. That was all it took — tulip bulb contract prices suddenly collapsed, and the tulip trade ground to a halt. The Dutch had bought tulip bulbs or tulip contracts at higher and higher prices, intending to re-sell them for a profit, but that only works if there is a new pool of buyers willing to pay the higher prices.

The British South Sea Company was founded in 1711 as a public-private partnership to reduce the cost of the national debt. To generate income, in 1713 the company was granted a monopoly to supply African slaves to islands in the South Pacific and South America.

However, at the company’s founding, Spain and Portugal controlled most of South America and there wasn’t much hope that this trade would actually be possible. Despite this, company stock rose greatly in value, thanks to the backing of England’s King George I, which allowed the company to expand its operations dealing in government debt.

In September 1720, the market suddenly collapsed, dropping the share price of the South Sea Company down to £124, and ruining many investors. Britain’s House of Commons launched an inquiry which showed that at least three government ministers had been bribed by the company, and the ensuing scandal ended with all 33 of the company directors being stripped of most of their wealth.

While most of its investors were ruined, the South Sea Company blithely continued on until 1750, when it sold most of its rights to the Spanish government.

The “Roaring Twenties” in the U.S. were a time of lavish wealth. This time of excess wealth accumulation started with an upward trend in the second half of 1921 — when the U.S. Federal Reserve eased credit requirements and lowered interest rates in an attempt to spur the economy via the increase in borrowing, which enlarged the money supply.

Consumers and businesses both began taking on debt, and by the mid-1920s, the money supply had expanded sharply, and stock prices were skyrocketing. More and more people began moving from farms located in rural areas and into cities.

When investors, banks, and the general public began to cut back in 1929 things began to fall apart. On Friday, October 25, 1929 — Black Friday — the U.S. stock market suffered the largest sell-off in history, greater even than the Black Monday crash on October 19, 1987, or the coronavirus-related drop on March 16, 2020.

People and businesses began to withdraw their money from banks, causing a “run” — where banks don’t have enough cash on-hand to meet withdrawal requests. Because of this, several large banks ended up being declared insolvent, and a great many people lost all of their savings. Then came The Great Depression — the worst economic fallout yet.

The first web browser — called Mosaic — was released in 1993, enabling access to the World Wide Web. Years later, the Taxpayer Relief Act of 1997 lowered the capital gains tax and made speculative investments more attractive to investors.

The Telecommunications Act of 1996 had also removed regulatory barriers — opening telecommunication markets to new entrants. This created a host of new technology companies, many of which were sold on the tech-heavy Nasdaq stock exchange. Between 1995 and 2000, the Nasdaq Composite stock market index surged 400%, and shares of semi-conductor maker Qualcomm skyrocketed 2,619% — with other Nasdaq-traded stocks rising more than 1,000%.

Fallout of the dot-com bubble

On April 3, 2000, Microsoft Corporation was found to be guilty of monopolization, and its stock fell 15% in a day, pulling the Nasdaq down 350 points, or 8%. On November 9, 2000, dot-com darling Pets.com went out of business, only nine months after its IPO.

Housing bubbles happen when rapid increases in the values of real property create unsustainable levels relative to incomes and price-to-rent ratios. When a housing bubble bursts, many owners find themselves “underwater,” where the current value of their home is less than the amount they owe on it.

This happened in early 2006 when U.S. housing prices peaked after rising 55% since 2000. Then, interest rates began to tick upward and adjustable-rate mortgages began resetting at higher rates.

Foreclosure rates increased, causing a follow-on crisis in the subprime, collateralized debt obligation (CDO) market, and also in the mortgage, credit, hedge fund, home supply, and foreign bank markets. This launched the Great Recession in the U.S., and on December 30, 2008, the Case–Shiller home price index showed a price drop of 18% — the biggest in its history.

Even former President George W. Bush and Chairman of the Federal Reserve Ben Bernanke were forced to announce a limited bailout of homeowners who were unable to pay their mortgage debts. In 2008 alone, more than $900 billion was allocated for loans and rescues, primarily of the Federal National Mortgage Association (Fannie Mae) and the Federal Home Loan Mortgage Corporation (Freddie Mac).

In a 1996 speech to the American Enterprise Institute, then-Federal Reserve Chairman Alan Greenspan asked how central bankers could tell whether asset values were overpriced, saying: “How do we know when irrational exuberance has unduly escalated asset values, which then become subject to unexpected and prolonged contractions?”

Only time will tell if today’s stock, commodity, and real estate investors will fall into the logic of “irrational exuberance” — and, by our collective reliance on social media — whether we’re all facing a grim economic forecast.