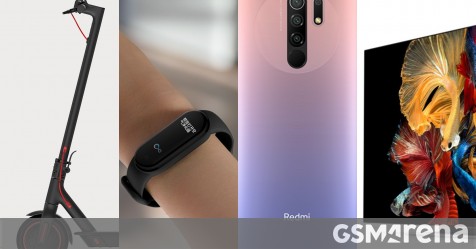 Xiaomi is gearing up for the global launch of several gadgets that are part of its ecosystem. The company’s Twitter account posted this teasing message to announce the date for the event – July 15 (next Wednesday).

There’s a phone hiding in the top half of the second “2” – the design with the fingerprint reader just below the cameras matches the back of the Redmi 9 exactly. It’s already available in Spain, though, beating even the launch in China. Still, it’s not yet available everywhere in Europe and certainly not globally.

Next up is a TV in the last “0”. Xiaomi did unveil the Mi TV Master just last week, a 65” OLED TV with a 120 Hz panel. The company does have other TV models that are yet to go global, so we can’t be certain. And that “USB cable” around the TV might actually be the Mi TV Stick HDMI dongle (which launched in Europe just yesterday)

The other two are easy to guess – the Mi Band 5 is going global (both the vanilla and NFC version should be available) and there’s a new electric scooter on the way (the Mi Scooter 2 Pro, perhaps, though it could be joined by the 1S and/or Lite).

Finally, there appears to be a speaker in the bottom half of the second “2”. It could be the Mi Smart Home Hub rather than just an ordinary Bluetooth speaker.

The event will be livestreamed on several platforms, it starts at 12 noon GMT on July 15.