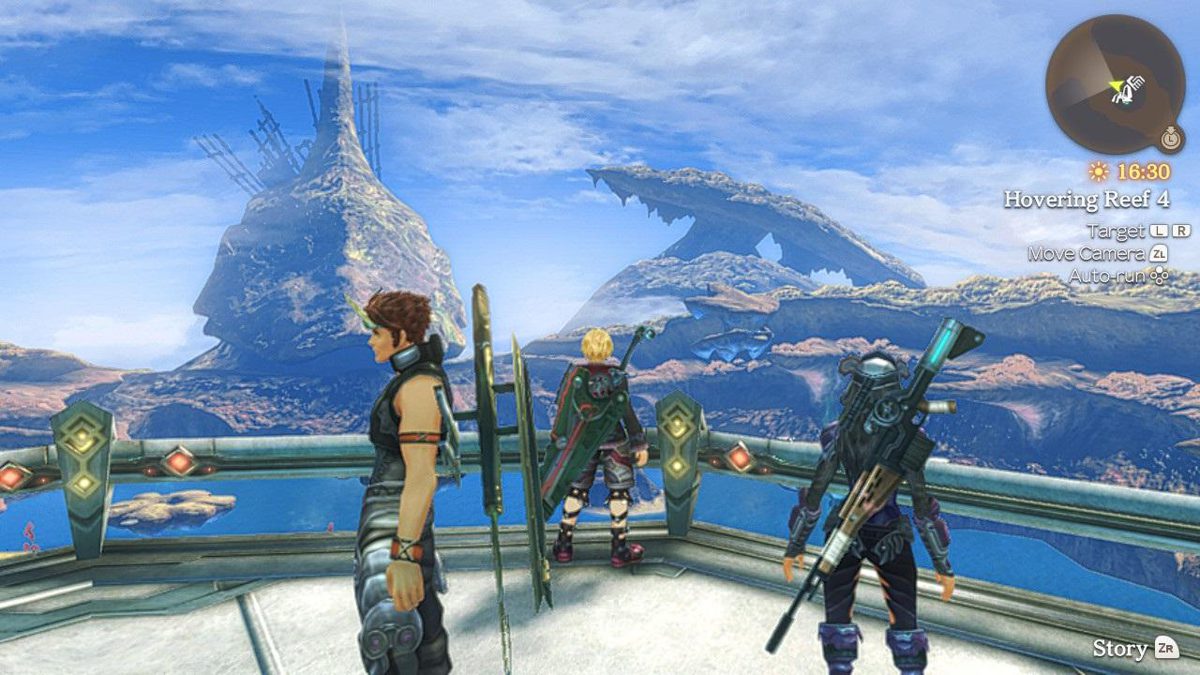 Xenoblade Chronicles’ core game on the Switch is identical to the 3DS and Wii games in terms of story, gameplay, and graphics (besides the higher resolution). This is the same JRPG Nintendo has published twice before, and it largely holds up. In a world where two continent-sized giant creatures stand locked in place after a giant battle, a tinkerer named Shulk takes control of the Monado, a powerful sword that can change the flow of fate. If you’ve played Xenoblade Chronicles in any form before, you’ve already seen the story. If you haven’t, it’s a big, compelling adventure filled with anime-inspired style and tropes.

Xenoblade Chronicles’ various zones are massive, sprawling areas similar in scale to MMO zones. Simply pushing through the main plot will only show you half of the game’s world. There are countless paths and uncharted areas you’ll only come across if you pursue side quests and simply explore by yourself, ignoring the yellow dotted line on the mini-map pointing you towards the next story objective.

While this is Xenoblade Chronicles’ definitive version, the game isn’t a remake or a remaster in any form. The graphics are largely unchanged from the Wii and 3DS versions, except that they run at the Nintendo Switch’s higher resolution. Compared with Xenoblade Chronicles 2’s graphics, Xenoblade Chronicles: Definitive Edition’s textures are pixelated, and characters and environments look simpler, as any game from two console generations ago might. The game isn’t ugly, and the grand scope of the zones is intact, but it feels a bit outdated. 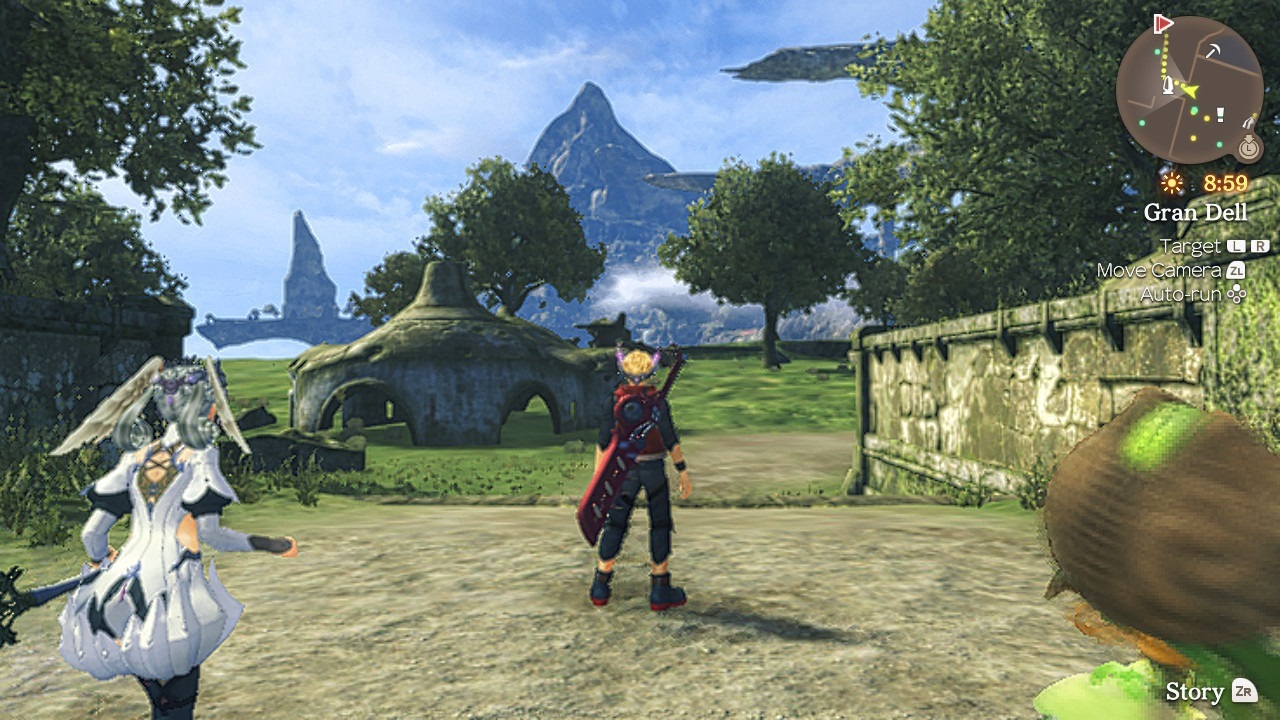 As you play through the game and explore the world, you’ll find countless monsters to fight, items to collect, and side quests to complete. Potential enemies are helpfully labeled with aggressiveness icons; eyes mean a monster will attack if it sees you, sound lines mean it will attack if it hears you, and a burst icon means it will attack if you use magical ether powers near it (and if the cursor is blank, the creature will only defend itself if you attack it). Ordinary enemies are regularly broken up with uniquely named enemies that are more challenging and give better loot.

Collectibles appear as floating blue wisps scattered throughout the map (and the very rare floating red wisps indicating important quest items), along with additional loot in chests that enemies can drop. Those collectibles don’t just let you complete side quests and provide fodder to sell to merchants; they also let you fill a Collectopedia album that challenges you to get one of every item randomly scattered throughout the game. The Collectopedia provides its own set of rewards, giving you useful equipment and stat-enhancing gems for every item category you fill for each area. You also receive bonuses for every filled page from each region. 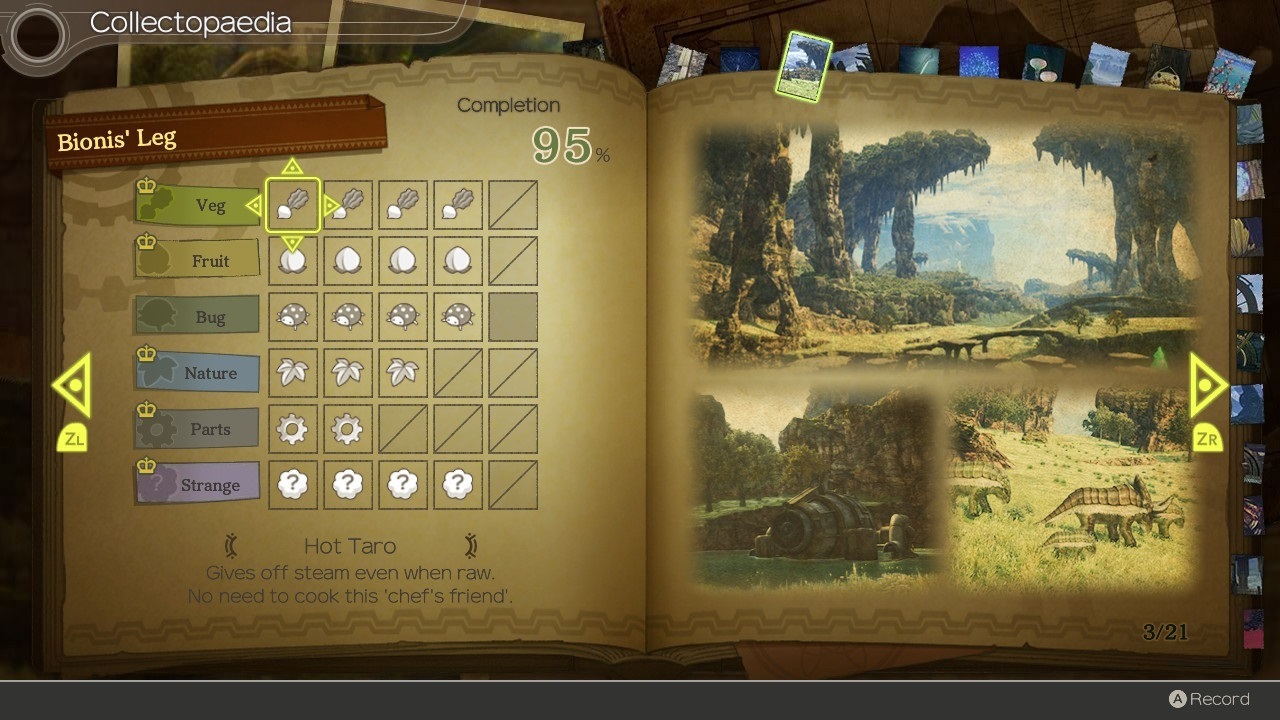 Side quests are plentiful and can be found by talking to characters with small exclamation points over their heads. These optional quests are usually one of two types: Kill a certain number of enemies or collect a certain number of items. They can be tedious if you go after each quest individually, but helpful indicators on the mini-map let you know if an objective for any quest you’ve taken (and you can take dozens at a time) is nearby and worth undertaking. They also provide useful items and plenty of money to buy equipment and upgrades.

The best and most interesting side quests require following quest chains and relationships between NPCs in the game, which can get extremely complicated and sometimes feels bewildering. Juggling dozens of fetch quests in your log is one thing, but adding the need to factor in whether certain characters like you and each other enough to activate even more quests can really feel overly complex and unnecessary. There’s plenty of work to do there, but you need to be obsessive to even attempt to finish every task that comes up.

Besides the collectible-hunting and formal side quests, you also eventually unlock the ability to rebuild a town by providing different amounts of items from around the world. These objectives aren’t specifically tracked like side quests, but they’re worth pursuing for the resources you get and merchants that become available as the town grows.

Xenoblade Chronicles’ combat is in real-time and, like the zone layout and quest structure, feels very MMO-inspired. You play one character at a time, usually Shulk, while the other two members of your party (from a selection of several) are AI-controlled. Each character automatically attacks and has a selection of skills, each with their own cooldown timer that forces you to vary what you do. Buffs and debuffs play an important part of fights, with nearly every skill either negatively affecting an enemy (in addition to damage, if it’s an attack), or giving a temporary benefit to a party member. Positioning is also vital, and many attacks are more powerful or have additional effects if performed from the side or back. 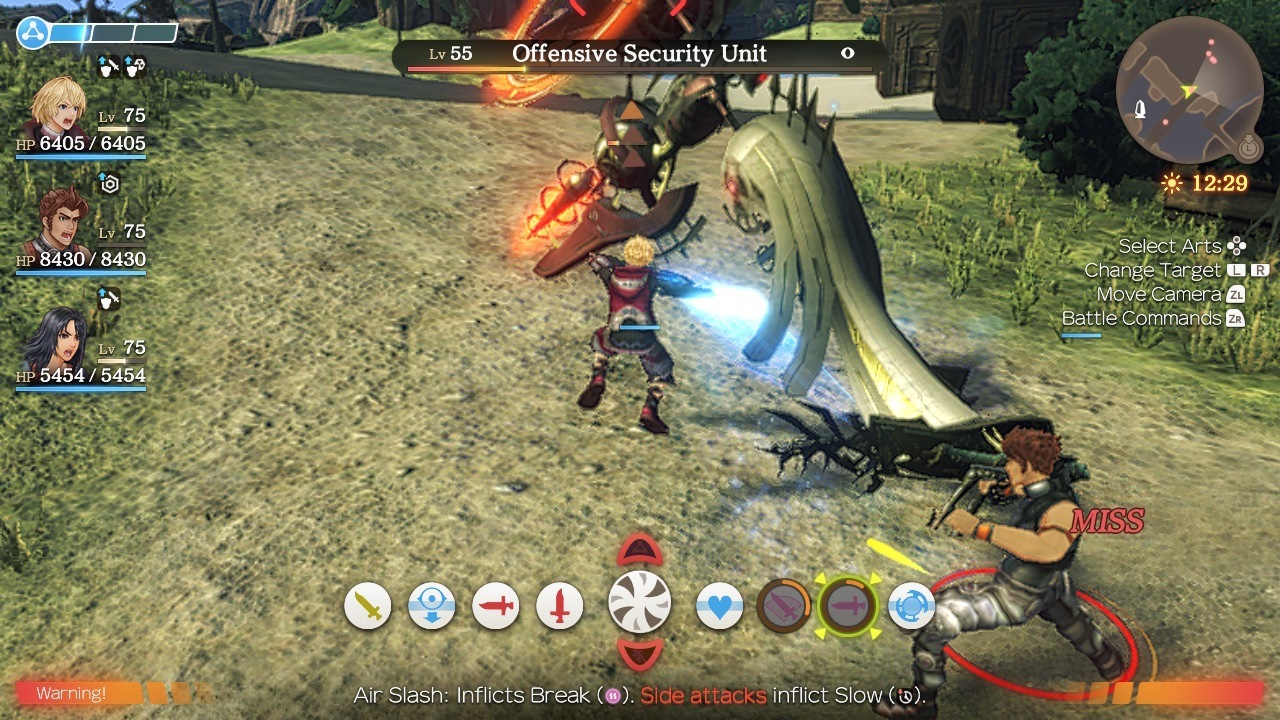 Shulk’s Monado provides an additional selection of powers that are vital to certain fights. The powers let you damage mechanical creatures that otherwise are immune to weapons, remove powerful auras that protect certain enemies, and protect your team from powerful physical and magical attacks. The attacks are vital and work in conjunction with occasional glimpses of the future provided by the Monado, which let you know when you need to prepare a shield or enhance the speed of a character so they can weather a strong hit.

There’s also the team meter, which builds up as you fight and adds another level of complexity to the game. You can use one of the three bars in your team meter to bring fallen allies back to life or warn them of potentially lethal attacks, so that they can protect themselves if the Monado isn’t ready yet. You can also use your team meter to set off a powerful chain attack where time freezes and your party members attack a target one after another. Chain attacks can be very powerful, and using the right move combination makes chains even longer. I found them less useful than the ability to bring party members back to life, however, and seldom used chain attacks in my playthrough.

Combat factors into the only additional content Xenoblade Chronicles: Definitive Edition adds to the main game. As you explore, you’ll find portals that take you to a sage who provides combat trials. These pit your team against waves of enemies at different levels and reward you with unique equipment and special currency you can trade to the sage for more items. There are level-based trials that you can go into with your current party, and special scenario trials that give you a preset party. They’re fun little extra challenges, but they don’t provide much extra content as you play through the game. 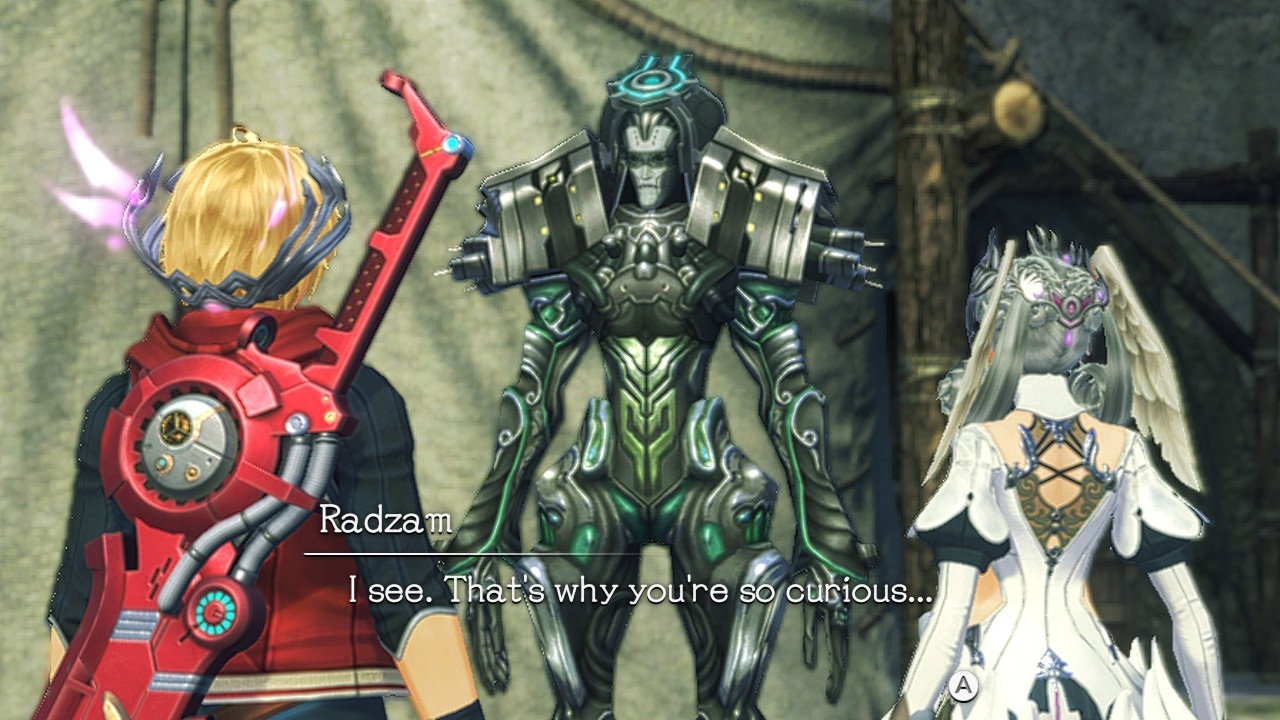 Xenoblade Chronicles: Definitive Edition does add one major piece of content to the original game—or more specifically after the original game. Future Connected is an additional adventure that takes place after the game’s conclusion. It’s a separate menu item on the opening screen, so you don’t need to play through Xenoblade Chronicles to access it if you’ve already experienced the story on another system.

Future Connected takes you to a new region on Bionis to solve a lingering mystery after the events of the game. Your stats and party are preconfigured for the content, so you can’t bring your high-level and equipment-laden party from the main game. Shulk starts at level 60, and gear is more limited. The new campaign plays largely the same as the main game, with a few small tweaks to combat and item collection. Your party can now be aided by a team of “Ponspectors,” puff ball explorers who follow you around, and crystals mined from resource points can immediately be used in equipment and no longer need to be crafted into gems. Besides those differences, Future Connected looks and plays the same as the rest of Xenoblade Chronicles.

It isn’t quite as massive as the 40-plus-hour main game, but Future Connected is fairly sprawling, and it adds several more hours of play time to the game. It’s a pleasant little additional adventure that takes a small look at the state of the world after the main game’s ending.

Xenoblade Chronicles: Definitive Edition is the best (and only current) way to play Xenoblade Chronicles right now. There’s plenty to do in the game, which will keep you playing for dozens of hours, even before you touch the satisfying extra campaign. Combat can feel a bit overly complex, though, and the graphics are a bit dated. The RPG is a strong choice for genre fans looking for a huge Switch time sink, but it’s hardly a must-buy, especially if you’ve already played Xenoblade Chronicles and don’t feel an urge for another long playthrough.