Xanadu’s World-First Photonic Quantum Computer is Made of Light 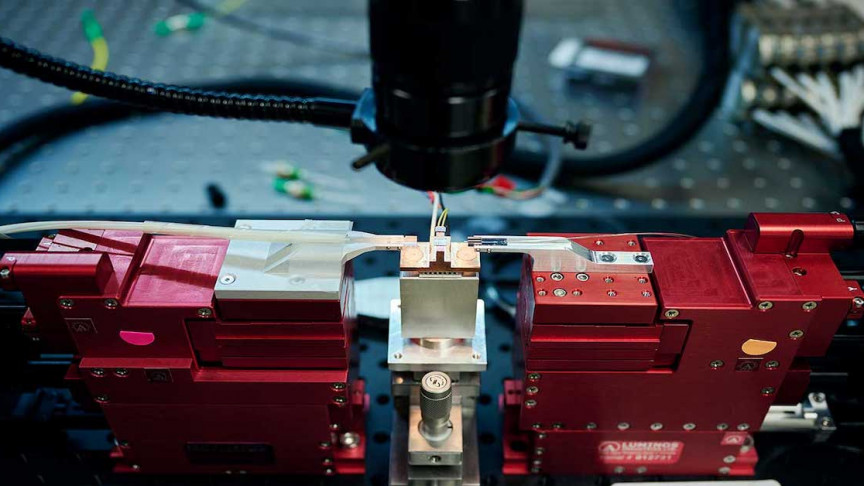 In the past month, the world’s first photonic quantum computer has become available to the public. The new Xanadu quantum processor is made of light. Only the size of a thumb-nail, the silicon chip is able to run algorithms by manipulating the infrared laser beams contained on it. But, we are getting ahead of ourselves. Quantum computing could eventually change the world.

Companies like IBM, Microsoft, and Google are racing to build reliable quantum computers. However, most of the general public does not know that some quantum computers are already available to institutions, banks, and universities. Just this past summer, IBM achieved the most powerful quantum computing system that featured a historic Quantum Volume of 64 on a 27-qubit client-deployed system.

Another exciting moment in the industry this month, this new photonic quantum computer also marks another important milestone in the realm of quantum computing and for Xanadu.

What is quantum computing?

To understand a quantum computer, you need to have a general understanding of computing. The computer chip in your computer right now is using bits. Think of them as tiny switches that can either be in the off position, or “0”, or in the on position, which is represented by “1”. Every “computer” that you use consists of millions of these bits.

Quantum computers are composed of what are called qubits. Thanks to a little quantum physics, these qubits are neither on nor off and are in what’s called “superposition,” meaning they are on and off at the same time or somewhere in between. Qubit allows for uncertainty, which in turn gives them more power. What if you sent each computer through a complicated maze? Our traditional computer filled with bits would need to solve its way out of a maze by going through each path individually.

A quantum computer can look at all paths in our maze simultaneously because it can “hold uncertainty in its head.” Imagine you wanted to run simulations testing potential drug treatments for an illness. Rather than one simulation at a time, you could run significantly more within a much smaller time frame. This, on the most basic level, is the appeal of a quantum computer.

Photonic computing could be the future

According to Xanadu, photonics-based quantum computers have many advantages over older platforms. The computers are able to operate at room temperature, easily integrate into existing fiber optic-based telecommunication infrastructure, which could open the doors to a future where quantum computers are networked.

“We believe that photonics offers the most viable approach towards universal fault-tolerant quantum computing with Xanadu’s ability to network a large number of quantum processors together. We are excited to provide this ecosystem, a world-first for both quantum and classical photonics.

“Our architecture is new, designed to scale-up like the Internet versus traditional mainframe-like approaches to quantum computing,” says Christian Weedbrook, Xanadu Founder and CEO.

“Xanadu’s unique type of qubit is based on squeezed states – a special type of light generated by our own chip-integrated silicon photonic devices,” says the team.

Similar to IBM Q, Xanadu’s new photonic quantum computing service will be available on the cloud. At the moment, partners and customers are currently testing solutions on the pre-release Xanadu Quantum Cloud. Some of these institutions include academic institutions, quantum startups, and major national labs, including Creative Destruction Labs, Scotia Bank, BMO, and Oak Ridge National Laboratory. Developers who use Xanadu Quantum Cloud get access to open-source tools available on Github.

“These include Strawberry Fields, its cross-platform Python library for simulating and executing programs on quantum photonic hardware and PennyLane, its software library for quantum machine learning, quantum computing, and quantum chemistry. The community for these platforms is growing rapidly,” says Xanadu.

The photonic quantum computing team has ambitious plans for the future and plans on doubling the number of qubits in their cloud systems every six months. Currently, they offer their partners and clients 8, 12, and 24 qubit machines. You can learn more here.

In general, quantum computing still has some benefits and pitfalls.

Some of the obvious benefits of quantum computers include that they can perform any task faster compared to a classical computer. This makes the computer highly desired by both financial institutions and banks.

Some obvious disadvantages? Quantum computers are wildly expensive to develop, hence why companies like IBM offer cloud computing services. Secondly, the power of quantum computing in the wrong hands could be used to do nefarious things. Finally, experts still believe that we have at least a decade before quantum computing reaches its full potential.