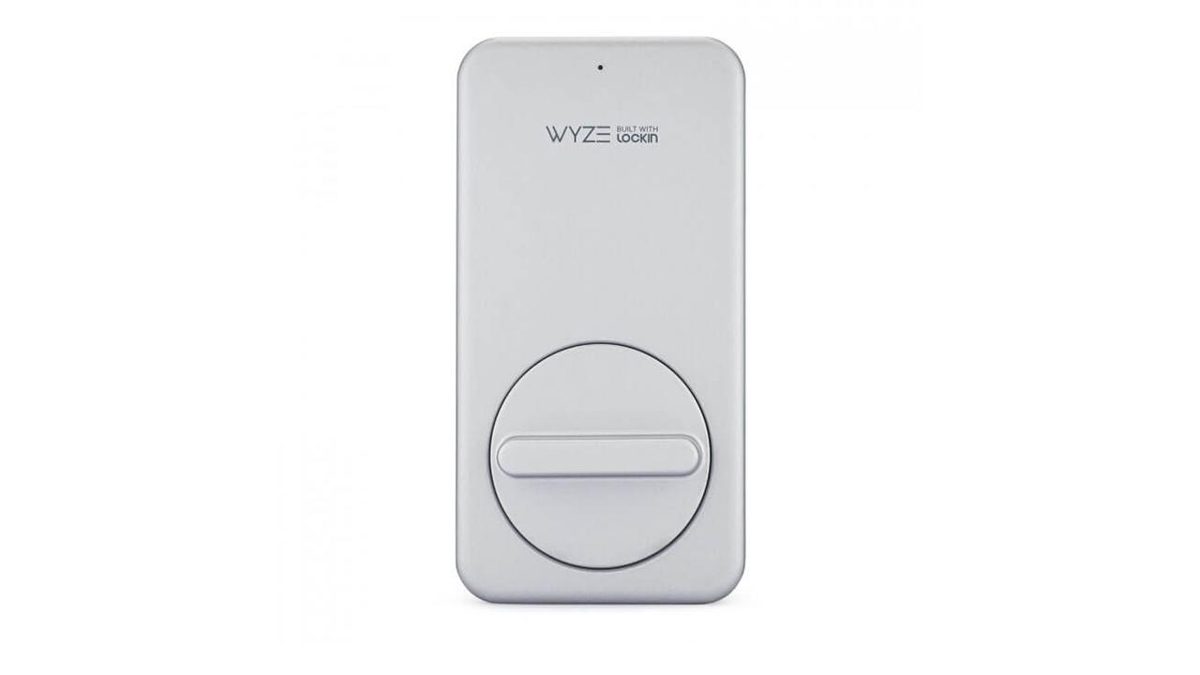 Known
for its inexpensive home security cameras and sensors, Wyze has entered the
smart lock arena with the Wyze Lock ($89.99), a reasonably priced model that
uses most of your existing door hardware. Easy to install, it uses a plug-in
gateway to connect to your home Wi-Fi network so you can control it with your phone
and share access with friends and family. It’s best lock you’ll find for the price, though it doesn’t offer as many features as our more expensive Editors’
Choice, the U-tec Ultraloq U-Bolt Pro.

The main
component, the interior escutcheon, sports a minimalist design with a nice brushed aluminum finish. It measures 4.9 by 2.5 by 1.3 inches (HWD)
and has a round 2-inch wide thumb turn at the bottom and a tiny LED at the top.
The LED will flash green during setup, glow solid green when the door is locked
or unlocked, and turns solid red when it fails to lock or unlock. 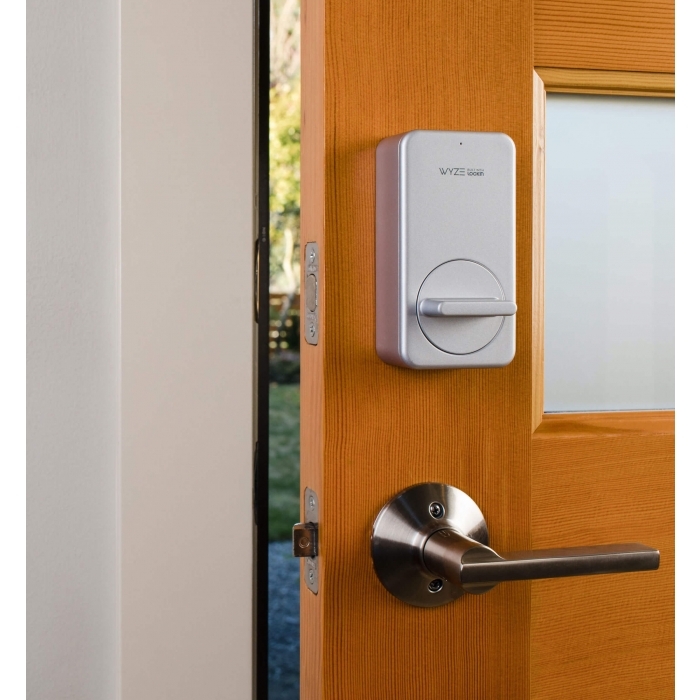 The
lock runs on four AA batteries that can be installed by removing the magnetic
face plate. It has embedded Bluetooth and Zigbee radios, but lacks a Wi-Fi
radio. Instead, it uses the included plug-in Wi-Fi gateway module to connect to
your home network. The puck-shaped gateway is 2.2 inches wide and 1.2 inches
thick. It has a pairing button on its side and an LED indicator on the top that
flashes blue and red during setup, flashes blue when connecting to the
lock, and turns solid green when successfully connected and working
properly. A flashing red light indicates a Wi-Fi connection issue. The base of
the gateway has a two-prong plug for a standard wall outlet.

The
Wyze Lock uses the same mobile app as other Wyze devices. Once installed, it will be
given a tab on the app’s home screen, along with any other installed devices. The
lock tab displays the name of the lock and its current status (open, closed).
Tap the tab to open a lock screen with a large Lock/Unlock button that is green
when the door is locked and orange when it is unlocked. A small icon off to the
right tells you if the door is open or closed.

Below
the button is a running event log that shows each lock and unlock event with
the time and person. If the lock was operated using the thumb turn it will say
Manual. Here you’ll also see when the door has been left open for a certain
period of time and if it was Auto-Locked or Auto-Unlocked. You can set the door
to Auto-Lock immediately when it is closed, or choose a waiting period of 1, 5,
10, 30, or 60 minutes before it locks. Auto-Unlock uses your phone’s location
services to automatically unlock the door upon your arrival.

To
access the lock’s settings, tap the gear icon in the upper right corner. Here
you can edit the lock’s name, share mobile access to the lock by sending an
invite, enable notifications, and configure the Auto-Lock and Auto-Unlock
features. You can also have the lock sound an alarm when the door has remained
open for a specific period of time. To create a schedule, tap the three dots in
the upper right corner of the home screen, tap Add/Edit Rules, and then tap
Schedule. From here you can choose a time and day(s) to have the door
automatically lock or unlock lock.

The
Wyze Lock doesn’t yet support Alexa and Google voice commands, nor does it
support IFTTT applets to allow it to interact with other smart devices,
although all three features are on the roadmap. Oddly, the lock doesn’t
interact with other Wyze devices such as cameras, sensors, and light bulbs.
However, it will work with the Wyze Keypad due out later this year. 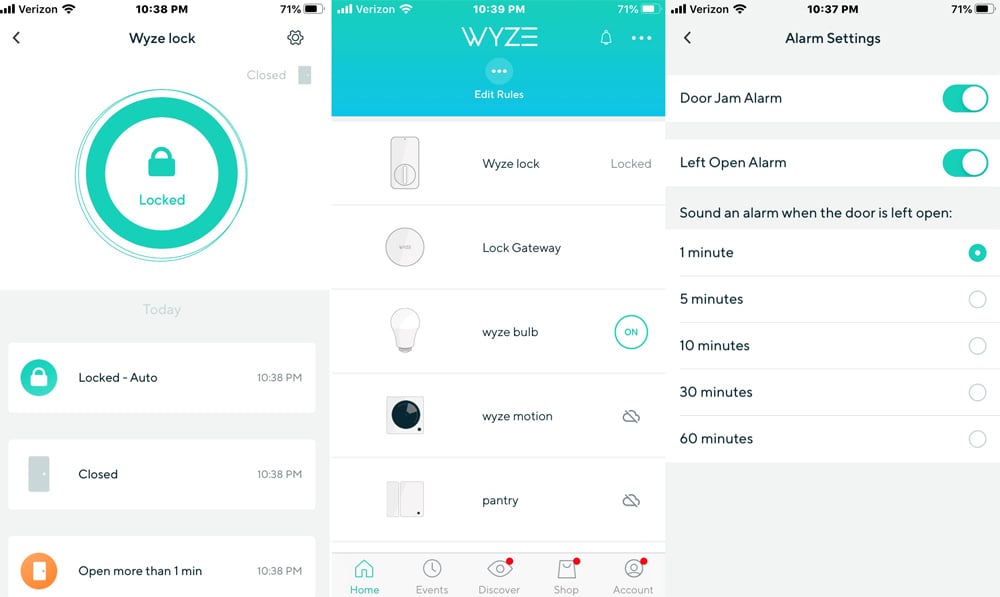 The Wyze Lock took less than fifteen minutes to install from
start to finish. I already had the Wyze mobile app and an account from previous
reviews, but if this is your first Wyze device you’ll need the app and an
account to proceed.

I plugged the gateway into a power outlet near my door
(Wyze recommends using an outlet within 50 feet of the door), tapped the three
dots in the upper right corner of the app’s home screen, and selected Add a
Product. I selected the Wyze Lock from the list and tapped Next when the LED
began flashing red and blue. The app identified the gateway immediately and I
was prompted to select my home Wi-Fi SSID and enter my Wi-Fi password. Within
10 seconds or so the gateway was connected and I gave it name.

After that, I tapped Begin
Setup to start installing the lock and followed the onscreen instructions to
tape down the outer cylinder of my old lock and remove the bolts that attach
the cylinder to the interior component, which in my case is a thumb-turn
latch. I attached the Wyze Lock’s mounting plate to the cylinder using the
bolts I had just removed and inserted the proper Wyze adapter for my lock’s
tailpiece. I removed the front plate of the Wyze Lock’s interior escutcheon and
slid it onto the mounting plate. After turning the thumbscrew
several times to ensure smooth operation, I tightened the two preinstalled
screws to secure the escutcheon to the mounting plate.

Next I installed the
four AA batteries and pressed the pairing button for three seconds, at which point
the LED began flashing green. I tapped Next in the app and the lock was connected
to the gateway after 15 seconds.

To
calibrate the lock, I tapped Calibrate and followed the instructions to close
the door and manually lock the deadbolt. I tapped Next, unlocked the bolt and
opened the door, then tapped Next again. I partially closed the door, tapped
Next, and completely closed the door and locked the deadbolt. The lock went
through a few open and close sequences and the calibration was complete. I gave
the lock a name and the installation was finished.

The
Wyze Lock performed well in testing. It responded instantly to lock and
unlock commands using the mobile app, and followed my automatic lock schedule to
a tee. Push alerts arrived immediately whenever the door was locked or unlocked, and when it was left ajar. The lock sounded an alarm when the door
was left open, but it wasn’t loud, even with the volume set to high. The
Auto-Lock and Auto-Unlock features also worked as expected.

If
you’re looking to turn your existing door lock into a smart lock, the Wyze Lock
will fit the bill. It’s attractive and easy to install, and it
performed admirably in our testing. However, by not supporting interactions
with Wyze cameras and sensors, the company has missed an opportunity to allow users to
create a seamless Wyze-only DIY security system. On the plus side, IFTTT and
voice support are forthcoming, and you won’t find a better smart lock for the price. If you’re willing to spend more, however, the U-tec
Ultraloq U-Bolt Pro will get
many more features for your money, including fingerprint and keypad unlocking.