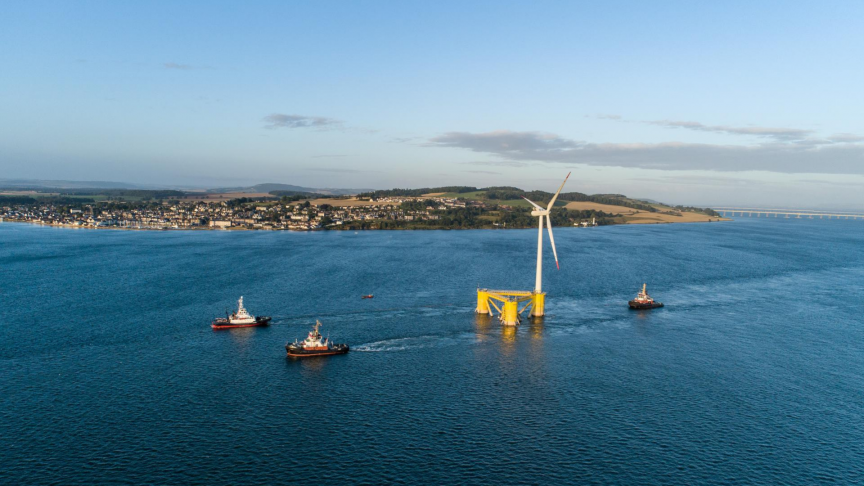 The world’s largest floating offshore wind farm has just been completed off the coast of Scotland, paving the way for better access to untapped wind resources.

The Kincardine Offshore Windfarm has a nominal capacity of 50 MW and is located 9.3 miles (15 km) southeast off the coast of Aberdeenshire in northeast Scotland. It plans to generate up to 218G Wh worth of electricity each year — enough to power the equivalent of about 55,000 Scottish households, reported the American Bureau of Shipping (ABS).

The ABS also classified the windfarm as the world’s largest floating offshore windfarm.

The windfarm sits in water depths ranging between 196.8 feet to 262 feet (60 meters to 80 meters) — regular offshore windfarms with fixed-bottom support structures stop at water depths of around 196 feet (60m), from where floating ones begin, per the National Renewable Energy Laboratory (NREL).

Floating offshore wind farms and how they work

Floating wind turbines are on the rise, and could be deployed at the utility-scale as early as 2024, per projections reported by the NREL.

Offshore floating wind farms work by connecting the buoyant substructure of a wind turbine to the seabed using mooring cables. By placing wind farms further out to sea they can access higher-speed and more consistent wind resources than fixed ones nearer the shore.

A number of companies and organizations are shifting their focus to floating offshore wind farms, including GE who shared a plans of a new floating winfarm concept in May this year. Time will tell how well the new and floating Kincardine Offshore Windfarm works, but this does look like it’s an emerging trend.