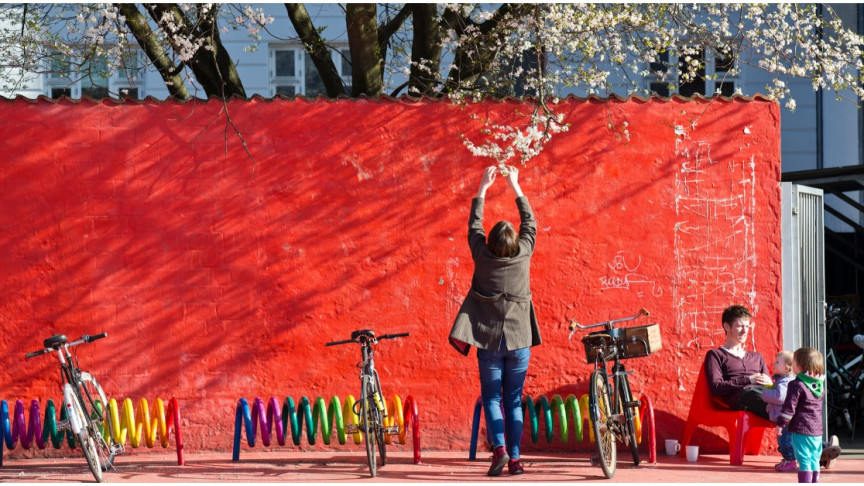 Denmark’s vibrant capital city, Copenhagen, is characterized by its canals, a well established cycling culture, strong economy, delicious pastries, astonishing architecture, and happy locals. In fact, Copenhagen is known for being one of the happiest cities in the world, if not the happiest. This is mainly due to their shorter workdays, free college tuition, more vacation days, and overall higher levels of healthy personal interaction.

Basically, the Danes know how to live better. One can find quality and high-standards all over Copenhagen, even in the smallest things. Let’s consider something as basic and simple as water. Tap water in Denmark undergoes strict daily quality control, resulting in water that is so clean and pleasant tasting that there is no need to add chlorine or any chemical into it. Fresh quality tap water in the city can be enjoyed in many places for free.

In 2009, Copenhagen set itself to an ambitious commitment. In 2009, the Danish capital was host to the COP15 Global Climate Conference. It was then when Copenhagen’s city leaders set a target that would serve both as a motivation for other cities in the country as well as an example and inspiration to other cities around the world.

Under the Paris Agreement, the European Union has committed to carbon-neutrality by 2050.
Seventeen members of the Carbon-Neutral Cities Alliance are pledged to cut their carbon emissions 80 percent by 2025. Copenhagen went further by declaring it will become the world’s first carbon-neutral city by 2025. So far, so good. The Danish capital is well on its way to reach its goal.

By declaring its commitment to carbon-neutrality by 2025, Copenhagen has committed to no net release of carbon dioxide into the atmosphere. In other words, Copenhagen’s carbon emissions are balanced out by funding an equivalent amount of carbon savings elsewhere.

Carbon-neutrality can be achieved in either of these two ways:

The effort to reduce carbon emissions must eliminate the use of coal, but it has been replaced by gas, which is another fossil fuel only more efficient. The answer toward carbon-neutrality is the implementation of 100 percent of renewable energy systems.

Copenhagen’s goal to reach carbon neutrality by 2025 is clearly connected with a strong focus on growth, employment, and quality of life.

In 2014, Copenhagen became the European Green Capital, leading as a model for the green economy. Denmark is determined to become fully independent of fossil fuels by 2050.

To reduce the emissions from its district heating system, the city is producing heat from municipal waste and is building a large, state-of-the-art combined heat-and-power plant fueled with wood chips that will replace a 600 MW coal burning power plant on the island of Amager in the city.

In terms of Energy Performance, an estimated 75 percent of the carbon emissions reductions will come from initiatives in relation to Copenhagen’s energy system mainly involving an increase in the share of renewable energy in the city’s district heating.

However, the water-based infrastructure is not just about district heating; it is also about district cooling. Since 2010, a growing part of major companies’ cooling needs has been covered by remote cooling, where seawater is circulated around the companies. This could potentially rid the city’s atmosphere of 80,000 tons of carbon emissions.

From 2015 to 2019, the project EnergyLab Nordhavn developed new urban energy infrastructures for future energy solutions. The project aims to integrate all relevant and available energy forms in the city including electricity and heating, energy-efficient buildings, and electric transport.

The project’s activities are concentrated around Nordhavn, Copenhagen’s newly revamped harbor neighborhood. This emerging district is designed to be the world’s foremost smart energy laboratory at full scale.

The Nordhavn district heating and smart-grid integration shows how electricity and heat, energy-efficient buildings, and electric transport can be integrated into one intelligent, flexible, and optimized energy system. Some demonstrations continue during 2020.

Smart City Copenhagen is a living laboratory. The city is testing smart technologies to handle the challenges of urbanization and climate change. The use of smart technology helps improve the physical experience of the city.

Information Technology (IT) solutions will make Copenhagen cleaner and healthier, making it work even better. Naturally, Copenhagen is a city that attracts startups. There are around 250 companies involved in smart city activities in Greater Copenhagen.

Small companies make up two-thirds of the smart city industry. They offer attractive investment opportunities to VCs as well as bridgeheads for collaboration with the public sector in Denmark.

As a living test lab for IT and smart city solutions, Copenhagen offers easy access to collaboration and partnerships with the public sector, industry, and academia. Citizen involvement is pretty high in Denmark, with a long tradition of involvement in urban planning and development. And of course, the Danes are early adopters of new technologies, making them some of the most digital infused in the world.

Cisco Systems has worked in partnership with three Danish municipalities to develop Internet of Things (IoT)-based citizen services and solutions to help Copenhagen reach the city’s objective of becoming carbon-neutral by 2025.

The rest of the world should pick up and develop similar projects and city labs. The technological advancement the world enjoys today must serve societal needs, and a greater purpose to fight climate change.