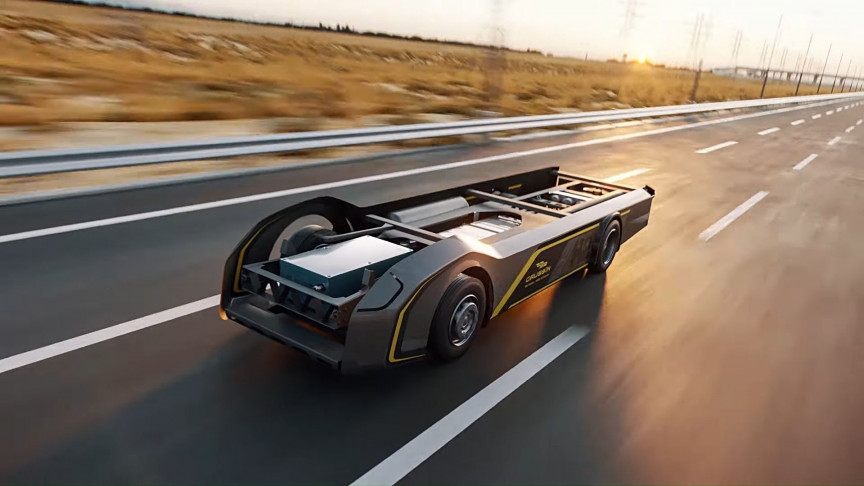 French manufacturer Gaussin intends to release the first prototype for its next-generation “skateboard” for trucks in mid-2021, according to a press release from the company. The company says it will be the first 100 percent hydrogen truck skateboard for class 8 tractors and straight trucks.

The platform, which can also be purchased for all-electric trucks, will be powered by Microvast fast-charging batteries.

“Gaussin presents the world’s first “skateboard” for class 8 tractor and straight trucks, ranging from 18t to 44t — either hydrogen or all-electric — for long haul and short-haul applications,” the company stated in its release.

“It consists of a rolling, versatile and modular platform designed for the various market players.”

The company claims that its new platform contains the key elements needed to produce the next generation of road trucks, as governments worldwide amp up restrictions against traditional ICE trucks.

Electric trucks using the platform will have a range of up to 250 miles (400 km), with a 3-minute battery swap option. Hydrogen-powered trucks, meanwhile, have the potential to reach an 500 mi (800 km) range, with a 20-minute refueling time.

“Global road truck players will be able to access these platforms as early as 2021 in order to integrate their own cabs, software, and equipment configurations–making the skateboard the core truck technology for a variety of applications such as transporting semi-trailers, boxes, tippers, tanks or drums with capacities ranging from 18 to 44 tons,” Gaussin said in its statement.

Hydrogen, which is still keenly debated as a viable fuel for commercial vehicles, is also seeing great innovation, with companies such as Aquarius Engines unveiling a tiny 22 lb hydrogen engine which it says can replace the traditional ICE engine.

Gaussin and Microvast aim to start building their first prototypes for the platform in mid-2021, with Microvast supplying its MV-C battery pack.

In its statement, Gaussin said, “the primary objective of the zero-emission skateboard is to accelerate the transition to clean and intelligent solutions for freight transportation.”

Have a look at a promotional video of Gaussin’s new road truck skateboard platform below.