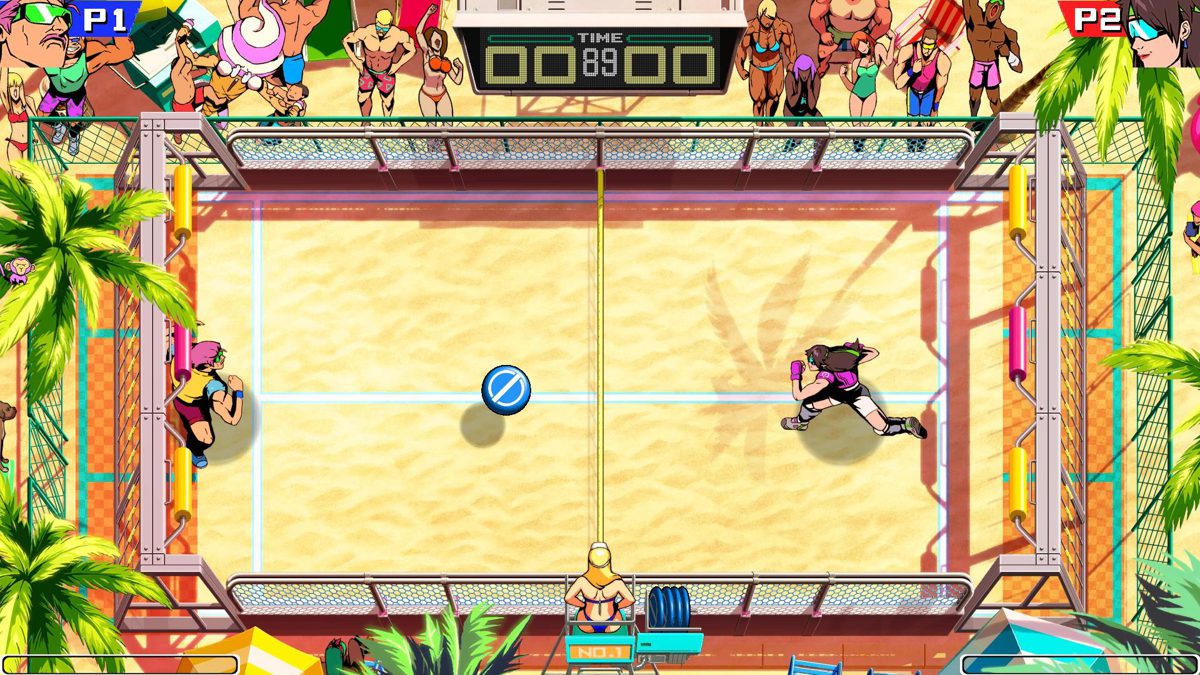 Before Mutant Football League, Super Mega Baseball, and the like resurrected the zombified arcade sports genre, Windjammers—a 1994 Neo Geo game based on competitive flying disc tossing—carried the fun-filled flame during the dark years. After proving a cult hit in the ROM scene, and after official ports brought the game to Wii, PlayStation Vita, PlayStation 4, and Nintendo Switch fans, WIndjammers found an audience hungry for simple, but intense, fantasy sports action. Windjammers 2 is set to debut in 2020, adding contemporary touches to the classic mechanics. The Steam Game Festival: Summer Edition gave us the opportunity to sample the upcoming PC game’s demo build.

Like the original title, Windjammers 2 is a game focused on the fictional Flying Power League, a competitive circuit featuring buff athletes tossing Frisbees—er, flying discs. This isn’t a simple game of catch; your mission is to be the first person to reach 12 points in best-2-out-of-3 sets. You do this by hurling a disc over the net to a location where your opponent can’t catch it or by flinging it into a goal. Each stage has multiple goals that are worth different point values depending on their on-field location. Windjammers 2, much like its predecessor, is volleyball meets Pong. But don’t let that semi-hacky comparison dissuade you from playing. Windjammer 2 is ridiculously fun.

Windjammers 2 differs from Pong and volleyball in dramatic, and more fun, ways. Each of the demo’s three playable characters—neon-drenched athletes that look like one part American Gladiator, one part Top Gun-volleyball-scene extra—sport different strength and speed abilities that determine how hard they toss the discs and their movement quickness. More importantly, the digital athletes have an array of basic and special moves.

The returning dash, lob, and charge shot are joined by a jumping spike, slapshot, offensive-minded Power Disk, and defensive-mind Power Toss. The last two maneuvers are particularly noteworthy, as they utilize the new fighting game-like EX Meter that fills as you make offensive and defensive plays.

Power Disk is a super flashy disc toss that’s hard to catch due to the many sparks that masks the disc’s precise location. Thankfully, Power Toss, a defensive move, makes it relatively easy to counter Power Disk, and transition straight into a charge shot. As you serve and the opponent returns, the disc’s speed increases, creating excellent moment-to-moment tension.

These many gameplay elements lead to fast-paced, matches featuring thrilling offensive explosions and incredible saves in contests of mind games and dexterity. Like Puyo Puyo Tetris, Windjammers 2 has the potential to be one of the best “non-fighting game fighting games.” Don’t be surprised if Windjammers 2 becomes an AnimEVO staple. 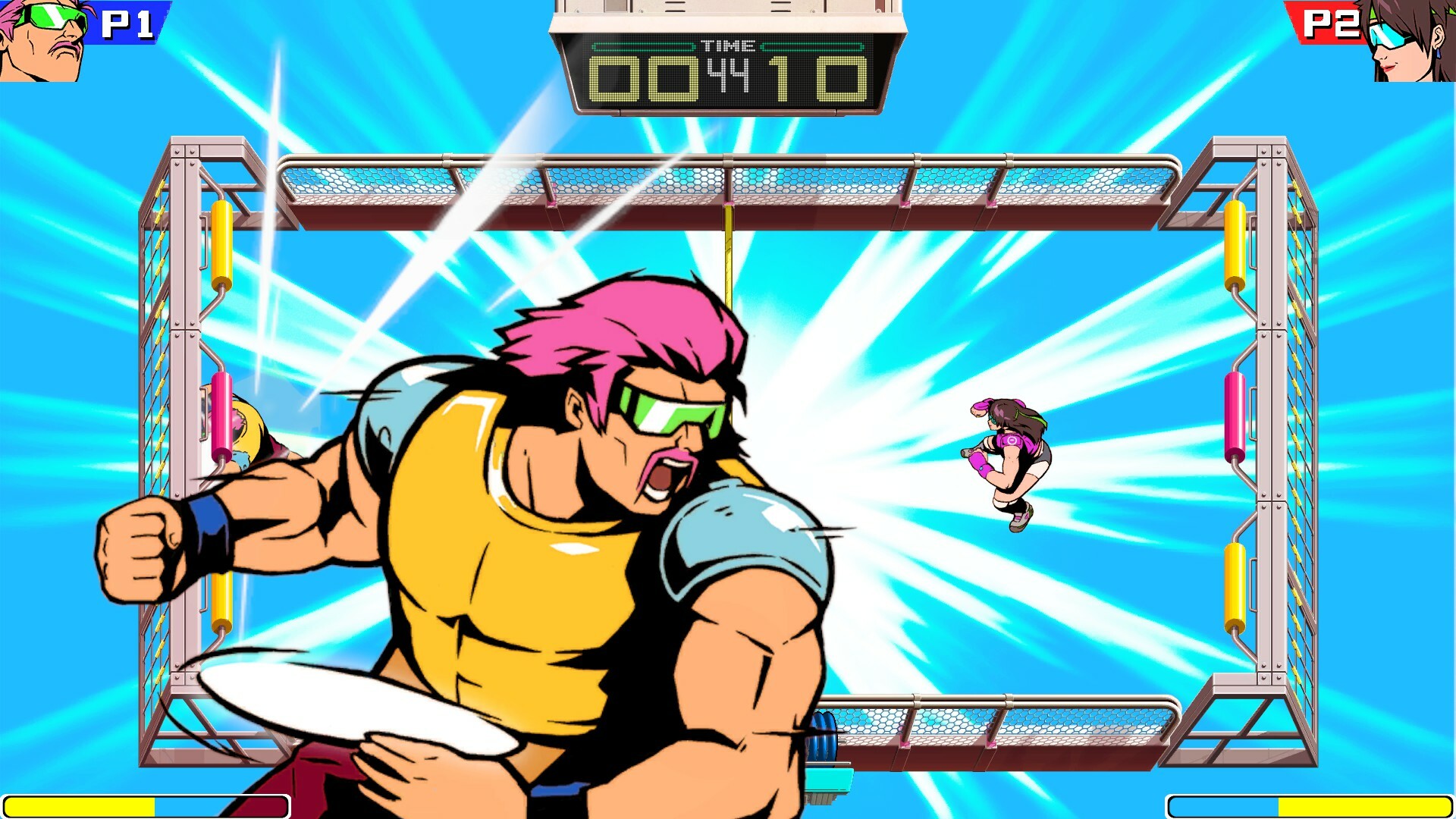 Aesthetically, Windjammers 2 continues the original game’s colorful, in-your-face art style. Instead utilizing chunky sprites like in the first series entry, Windjammers 2’s characters are composed of sleeker lines that recall comic book art. If you were initially turned off by the visual change as I was when the Windjammers 2 trailer dropped, rest assured in knowing the game looks quite good in motion.

As a hand-drawn, 2D game, Windjammers 2 doesn’t demand much from your PC in order to run. According to the game’s Steam page, your computer needs just an Intel i5 CPU, an AMD Radeon HD 5750 or Nvidia GeForce GTX 960 GPU, and 4GB of RAM. The storage requirement is unknown, at this time. My gaming desktop, a rig that far exceeds the minimum system requirements, ran Windjammers 2 at a steady 60 frames per second rate.

Unfortunately, the Windjammers 2 demo’s online experience is a mixed bag. Connecting with other players proved impossible in the early moments of the demon’s release. Thankfully, the experience improved over the course of the day, and contests were mostly lag-free affairs. So, hopefully, the delay-based netcode sees improvements before the game’s full release.

If developer and publisher Dotemu wants to cater to the fighting game community that’s supported the original Windjammers for years, it should include well-designed online lobbies and a spectator mode. Right now the only confirmed online elements are Ranked and Quick Match modes.

Windjammers 2, almost two years after its official unveiling, still doesn’t have a release date, besides a vague “Coming Soon” Steam designation. That’s fine. Now that Windjammers heads have gotten a taste of the action, they can see that the game is moving in the right direction, which is immensely comforting. Here’s hoping that Dotemu gets the online component straight, as Windjammers 2 could be a big hit among gamers who want quick, heated sessions.