Why China’s 2,000-Year-Old Terracotta Army Is So Well Preserved 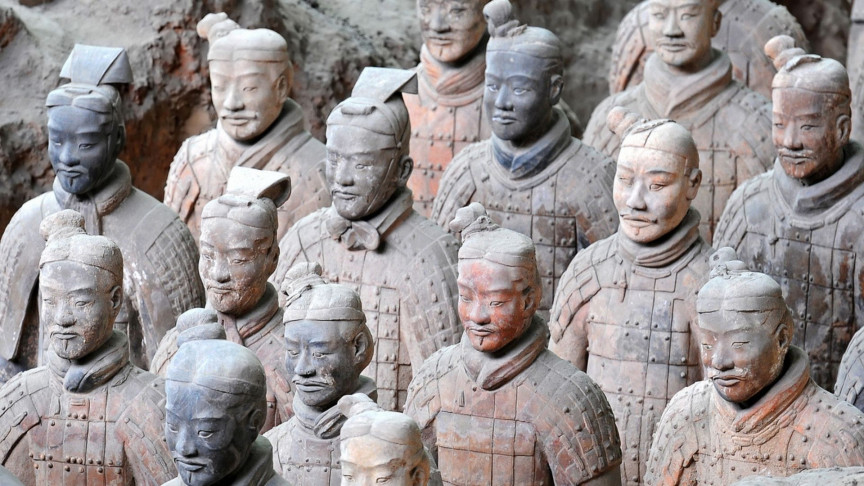 Scientists discovered the reason how China’s renowned Terracotta Army’s weapons remained so well preserved for over 2,000 years: A combination of bronze, and the soil the massive army was buried in.

The study was published in the journal Nature.

First Emperor of China until his death in 221 BC, Qin Shi Huang was the founder of the Qin dynasty and the first emperor of a unified China. He was also extremely afraid of death.

To protect him in the afterlife, the emperor had an 8,000-strong army of clay, or terracotta, warriors built for him and placed in a mausoleum in Xi’An, which is now a World Heritage UNESCO site. This is the Terracotta Army that he lay buried with for approximately 2,200 years.

No two faces of these terracotta warriors are alike, but what’s fascinated archaeologists and scientists alike, is just how well these warriors’ weapons have been preserved over the centuries.

When archaeologists uncovered this clay army in the 1970s, a number of fans of “ancient lost technologies” believed these weapons had survived the test of time thanks to some technology ancestors used, but that was not passed down over the years.

Another theory claimed that because these weapons had barely rusted, they had been treated somehow with anti-rust chemicals. After chemical analyses, traces of the element chromium were apparent, so it was assumed that ancient Qin dynasty people had treated these weapons with a sort of chromium coating, or a “chromate conversion coating” (CCC), as the report stated.

However, the recent study’s authors believe these two theories should “be abandoned, immediately,” and prove why.

The Terracotta Warriors Museum is located in Xi’an, Shaanxi Province of China. It is a large collection of life-size sculptures in battle formations to protect Emperor Qin Shi Huang (259 – 210BC). In 1987, the Terracotta Warriors were listed in the world heritage list by #UNESCO. pic.twitter.com/B7aIPM3uCj

On top of that, the best-preserved weapons weren’t the ones that had much chromium coating, so this theory couldn’t stand on its own two feet, explained the authors of the study.

Simply put, the preservation was managed thanks to a mixture of the higher tin content in the bronze, as well as the specific soil the Terracotta Army was buried in. The soil had yet to be examined, but when the scientists of the new study looked into it, it showed a slightly alkaline chemical composition and had small particles that would have prevented natural acids and organic matter from rusting through the metals.

It would have been cool to claim the ancient Terracotta Army’s weapons preservation was linked to some long-lost technology. However, it’s potentially even cooler that scientists were able to figure out the long-standing mystery of these incredible artifacts.