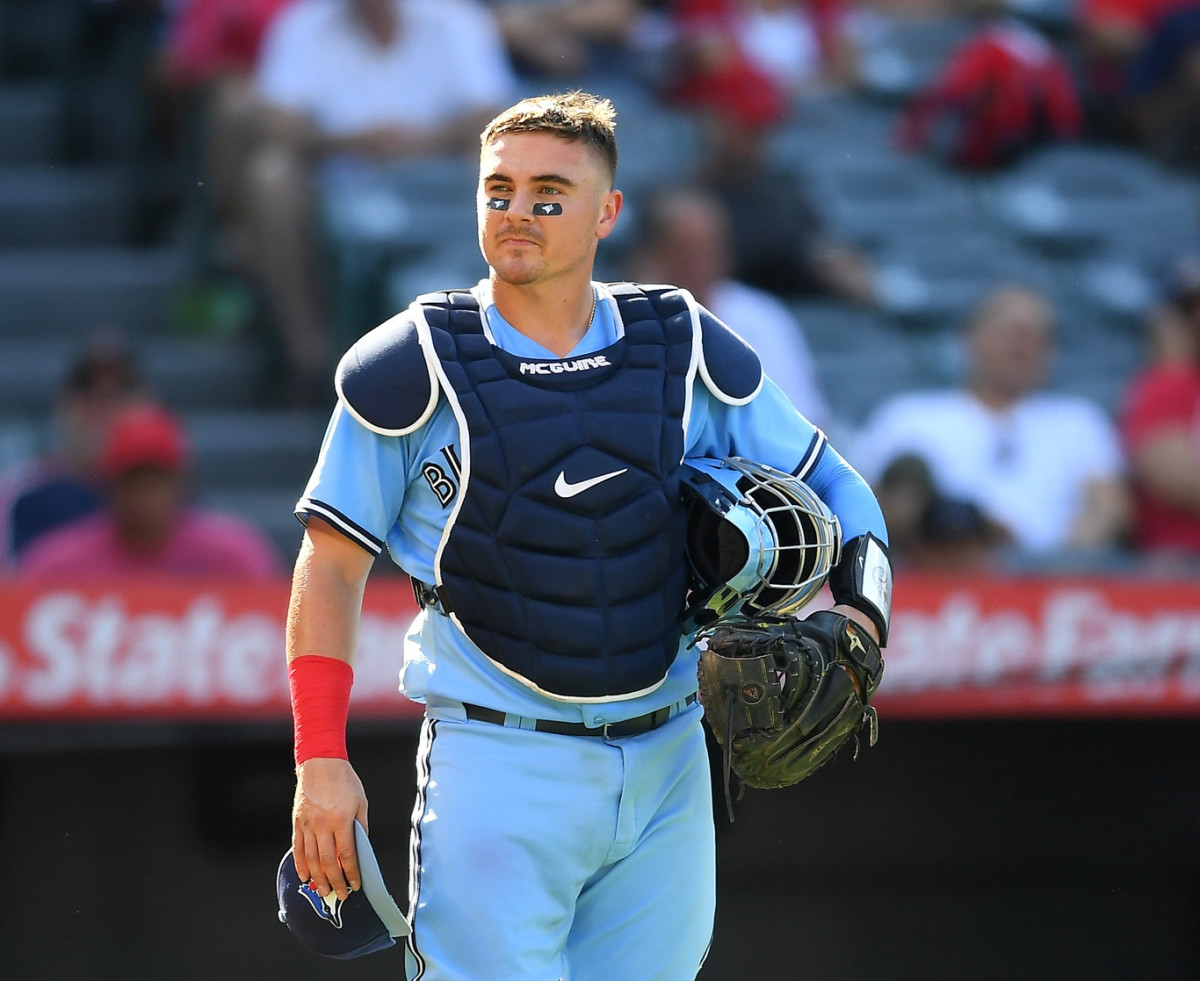 DUNEDIN, Fla. — These days, technology intersects with baseball in many ways.

Take the sixth inning of Tuesday’s spring game between the Blue Jays and Yankees, for example, where Toronto’s battery of Danny Jansen and Trevor Richards communicated using a device called PitchCom.

In this setup, the catcher wears a remote-control device on his wrist that has a series of buttons, with each button representing a different pitch call. The pitcher wears an earpiece receiver, where a generic male voice relays the pitch in either English or Spanish.

PitchCom’s purpose is to eliminate sign stealing and improve the pace of play. Like any drastic change to the game, though, it took some getting used to.

Blue Jays catcher Reese McGuire, who used the PitchCom system in practice, said he found it difficult to get into a rhythm behind the plate, since the pitcher no longer needed to look to the catcher for signs before coming set.

Even with the timing issues, McGuire said his pitching staff is willing to give PitchCom a try.

“Some are open to it more than others,” he told Inside The Blue Jays.

McGuire said he enjoyed certain aspects of the experiment, like how it allowed pitchers and catchers to plan ahead during breaks in play.

“You get the ball back from the umpire; you toss it back to the pitcher. While he’s rubbing it up behind the mound or something, you could fire up a pitch in his ear,” McGuire said. “Maybe he looks at you and nods his head, or maybe looks at you and it’s like, no, he’s got another idea.”

The 27-year-old said he could see the PitchCom system speeding up pace of play. He’s not as convinced, though, on how it will prevent sign stealing, where runners on second base read the catcher’s finger signs and relay them to the hitter through verbal cues or gestures.

“I would say confidently that, three out of four times, if a guy’s getting a sign from second base, he’s getting it from the pitcher in his glove or whatever grip he has as he gets into his glove,” McGuire said.

Sign-stealing is as old as the game of baseball, and McGuire—who enjoys the “IQ” part of the game, where teams do everything to get an advantage—said he wants those advantages to come naturally, and not through cheating. The Astros’ trashcan-banging scandal, which was uncovered in 2019, could’ve theoretically been prevented using PitchCom.

MLB is always looking for ways to innovate its on-field product, and while it’s unclear when, how, or if the league will move forward with the PitchCom device, several other rule changes are well on their way.

The Automated Ball-Strike System (ABS), also known as ‘robot umpires,’ will be used in Triple A in 2022. In this system, radar cameras map out the strike zone for each hitter, and relay, via an earpiece, a ball or strike call to an umpire in real time. It is designed to remove human error from the game.

“It would definitely take a little bit of passion away from my game, to be completely honest,” McGuire said of an ABS strike zone. “It would be like there’s no more value in being able to be good with your hands back there and maybe manipulate a pitch.”

McGuire said he grew up watching catchers, such as the Cardinals’ Yadier Molina and his former Blue Jays teammate Russell Martin, make a living out of stealing low strikes for their pitchers with sleight-of-hand receiving work. Catching has a degree of artistry to it, and McGuire isn’t convinced the league will embrace the ABS system.

“It’d be a very interesting conversation, and I would say right now the feel around the league is that I don’t think guys are on board with that,” he said. “It’s not great for the game, I don’t think.”

Any change from a human strike zone to one governed by ABS would carry implications beyond the field of play. Lifelong defense-first catchers, like the Blue Jays’ Kellin Deglan, could be out of a job.

“It’s a little bit concerning,” said Deglan, who’s caught over 5,000 innings in his 10-year minor-league career. “Because one of my strengths is receiving, so I can bring value to my team by gaining some of those borderline pitches.”

The entire catching position is evolving. Nowadays you’ll see most major leaguers dropping to one knee to receive pitches with runners on base, something that used to be a massive no-no in the industry.

Deglan said he used to stay on his feet with runners on, but he’s now converted to the one-knee stance after five years in the Yankees’ minor-league system, which valued called strikes over the occasional passed ball.

“I’ve kept it going since I’ve been here with the Blue Jays, but it’s everybody’s preference,” the 29-year-old said.

More radical rule changes are working their way up the pipe, with the ‘Dropped Pitch Rule’—which allows hitters to steal first base during any wild pitch or past ball at any point in the at-bat—being introduced to the Atlantic League once again.

Regardless of which rules actually make their way to MLB, the catcher’s spot could be unrecognizable in the future.

“I think the skillset that’s being asked of a catcher will be a little bit different,” said Blue Jays bench coach/catching coach John Schneider. “[You’re good] as long as you can keep it in front of you and just make a good throw to second base.”

And, if rule changes zap the catching position of all its imperfect nuances, will young kids want to play a more interesting position, like shortstop or center field?

“I hope not, because I think [catcher] is the best position on the field,” Schneider said. “But hopefully the interest level stays the same, and we’ll see where we’re at in a couple years.”