Why Axis: Are Flagship Phones More Expensive Than Ever? 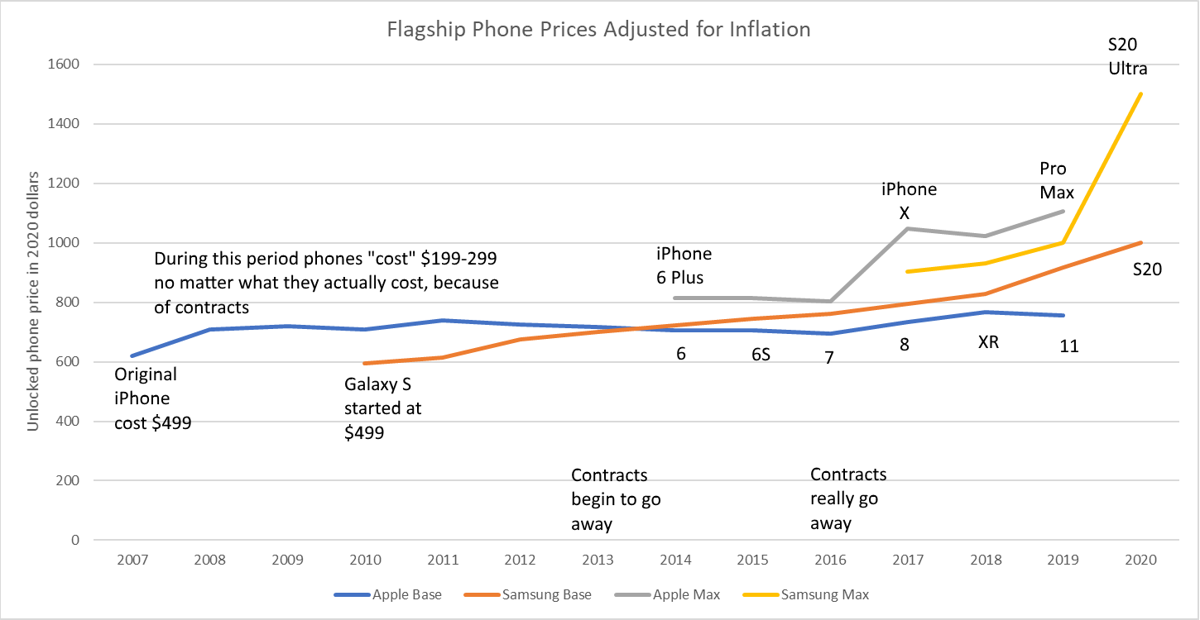 The high price of the Samsung Galaxy S20 Ultra ($1,499.99) is a hard pill to swallow, and it really feels like flagship smartphones are more expensive than ever. Adjusting for inflation, that’s only kind of true—but we can explain why it feels absolutely true.

I took a look at the “base-named” smartphones from Samsung and Apple from 2007 to 2020. In both cases, the prices of those main lines—the iPhone 6, 6S, 7, and 8, for example—increased only slowly, but the companies developed new lines of higher-end phones that they then billed as their flagships.

Starting in 2014 with the iPhone 6 Plus, Apple’s “plus” lines bumped up the advertised prices of iPhones by $100, creating a new tier.

Samsung started a premium line in 2015 with the Galaxy S6 edge, but it didn’t heavily promote the s6 edge or s7 edge; the S8+ was the first “super-premium” Galaxy phone I remember that made a big splash, so it’s the first one I put on this chart. (Samsung also has the Galaxy Note line, which played the role of super-premium devices all the way back to 2011.)

From a marketing perspective, the big bump happened in 2017 with the iPhone X. Since then, Apple has pitched $1,000-plus phones as its primary lines while quietly implying that its base models are slightly subpar. The base models have still sold very well, though.

Nothing prepared us for the gigantic price jump of the Galaxy S20 Ultra, though, as well as the lack of a $749-ish “Galaxy S20e” model this year from Samsung. By and large, this appears to be the effect of adding 5G to the phones—$200 to 300 extra that you can’t turn down.

4G did not have this effect, at least with Apple and Samsung phones. The iPhone 5, at $649, was the first 4G iPhone—and it cost the same $649 as the previous iPhone 4S.

4G came to the Galaxy line in its second year, when Galaxy phones were a welter of carrier-specific models. The Sprint Galaxy S II Epic 4G Touch cost the same “$199.99” (the advertised price) on contract as the previous year’s model; AT&T’s Skyrocket cost “$249.99,” up $50 from the previous year’s $199.99. And there we get to why these phones really feel much more expensive than old phones.

It’s not just 5G. That camera is also pretty expensive.

I know you’re looking at that graph and thinking, but no, the $749 iPhone 11 feels much more expensive than whatever my iPhone 4 cost. Didn’t I pay $200 for my iPhone 4?

Yes, you did! What really changed between 2013 and 2016 was that two-year contracts went away, and everyone started paying the full prices of their phones over time, not subsidized by service contract prices.

In 2013, T-Mobile introduced the first “Un-carrier” plan, which was to ditch two-year contracts in exchange for making you pay the real price of your phone. That started a trend against contracts and subsidies at US carriers, culminating with Verizon pushing in that direction in 2016.

The thing is, this hasn’t led to a real no-contract marketplace. Rather than service contracts, we’ve largely gone to monthly payment plans that effectively function as contracts—yes, you can pay them off without penalty, but most people just stay locked into them for the duration of the plan.

The big question this year is what’s going to happen with Apple’s upcoming 5G iPhones (if they’re even coming this year, given coronavirus-related supply chain interruptions). Could the “5G tax” add $200-300? We’ll see.