Where Should We Settle on Mars? 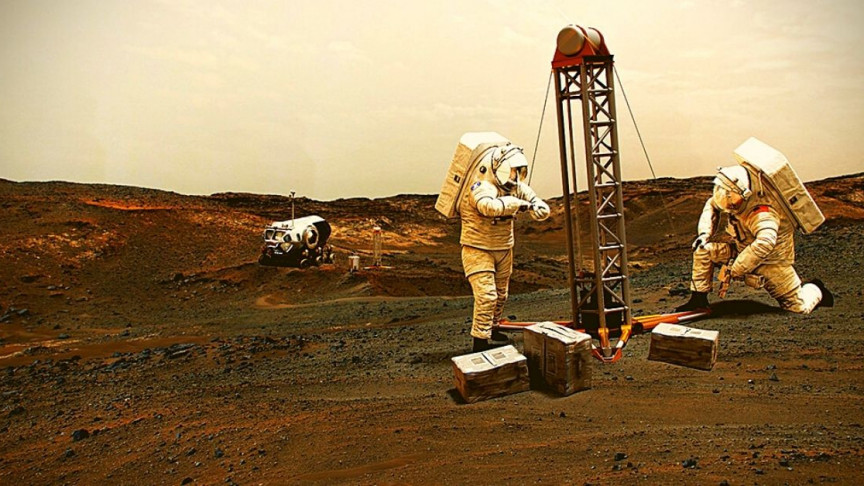 Eventually, we’re going to Mars. But to build a human settlement, we’ll need readily-accessible water to foster life-support, and use it to sustain agriculture, procure rocket propellant, and more.

However, if we don’t choose the right location, the first humans to settle on Mars could become permanent residents of the grim variety — lacking ready-made rocket fuel or basic necessities. With this condition in mind, a new study published in Nature Astronomy reveals a comprehensive map, detailing the most- and least-likely locations where water ice could turn up on the planet’s northern hemisphere.

And, to fully optimize astronauts’ time on the Red Planet — NASA and other international agencies are drawing up plans to send robots capable of enhancing our map of ice water deposits on Mars — providing certainty where ambiguity is most unacceptable.

With a nearby water supply, astronauts could achieve unprecedented advances in scientific studies — since, if there is microbial life on Mars, it will most likely exist near water sources.

“The next frontier for Mars is for human explorers to get below the surface and look for signs of microbial life,” said NASA’s lead in the search for Martian resources to support human exploration of the Red Planet, Richard Davis. “We realize we need to make new maps of subsurface ice to improve our knowledge of where that ice is for both scientific discovery and having resources astronauts can rely on.”

The new map of Mars’ northern hemisphere combines 20 years of data from NASA’s Mars Odyssey, the Mars Reconnaissance Orbiter, and the now-defunct Mars Global Surveyor, and comes joined with a project called Subsurface Water Ice Mapping (SWIM). The SWIM project is moving forward under the leadership of the Planetary Science Institute in Tucson, Arizona — under the management of NASA’s Jet Propulsion Laboratory in Southern California.

‘Near’ polar regions best place for landing and water ice

Most scientists and engineers point to the area below Mars’ polar region in the northern hemisphere as a place where we’re most likely to find subsurface ice. On Earth, this is where Canada and Europe are; but on Mars, this area is where the glacier-filled valleys of Deuteronilus Mensae and Arcadia Planitia are.

However, to ensure astronauts land in areas of optimal conditions, the “middle-ground” between where most water ice of the poles and where most sunlight hits the planet at the equator needs further study.

A recent statement of intent from NASA and three international partners outlines a plan for a potential robotic ice-mapping mission on Mars — to locate abundant and easily-accessible ice for possible landing sites on the Red Planet, according to a recent blog post on NASA’s official website.

Among signees are NASA, the Canadian Space Agency (CSA), the Italian Space Agency, and the Japan Aerospace Exploration Agency (JAXA). Together, the international space agencies will work to explore and define a robot-based mission no earlier than 2026.

Once the concept is flushed out, the Ice Mapper mission will see robots search the surface of Mars to identify the location, volume, depth, and abundance of ice deposits near the Red Planet’s surface.

This could significantly enhance the new map of Mars from orbital observations, and would pre-locate crucial science objectives for the first human missions on the surface — which should last for roughly 30 days (after landing).

This would save astronauts significant time — since they would know in advance which ice deposits are accessible with human-tended science, like ice coring. A more enhanced ice map of the Red Planet can also serve to support long-term expeditions to Mars, drawing geographical constraints around rocks and other terrain hazards.

Commerical rideshares on the Red Planet

As the robotic ice mapping concept evolves, doors will open for interested commercial parties. Rideshares to companies who can share the financial weight of missions to Mars will become the next phase — much like NASA’s approach to return humans to the moon under the Artemis program.

And, like the Artemis program, commercial opportunities won’t be limited to surface applications, alone. Recently, an astronaut suggested the use of 3D-printing technology to provide food in interplanetary space, during an online session of the American Association for the Advancement of Science (AAAS).

In the past, astronauts used packets of crisps to eat through the day, said former European Space Agency astronaut Professor Reinhold Ewald. “I think we will be 3D printing food [in] the long run.”

“There’s no way to grill it or barbeque it, so you have to find other ways, and I think chefs are quite inventive to add taste to something that probably doesn’t look so nice as your daily food on the ground,” said Ewald, according to a Yahoo!sport report.

While there’s no announcement yet, submitting a 3D printer capable of supplying food to astronauts on their way to Mars would be an auspicious rideshare opportunity for a private company.

In fact, NASA recently offered a prize of up to $500,000 for the first team to develop a novel food system to sustain long-duration deep space missions.

Well-fed and with an enhanced map of the Martian surface, future settlements on the Red Planet might use local water ice and carbon dioxide to create rocket fuel — primed and ready to re-launch the crew on its eventual return trip to Earth.

While currently we only have a “proof of concept” of such rocket fuel-producing capabilities, many companies — including SpaceX, Blue Origin, and Firefly Alpha — are already working on methane-based rocket fuel.

However, until SpaceX’s Starship or an interplanetary-worthy spacecraft from another entity is on its way to Mars, enhancing our map of water ice on Mars’ northern hemisphere — just below the ice cap — is the most immediate step to building a comprehensive plan for where humans should settle on Mars.