What Would It Actually Take Us to Create a Dyson Sphere? 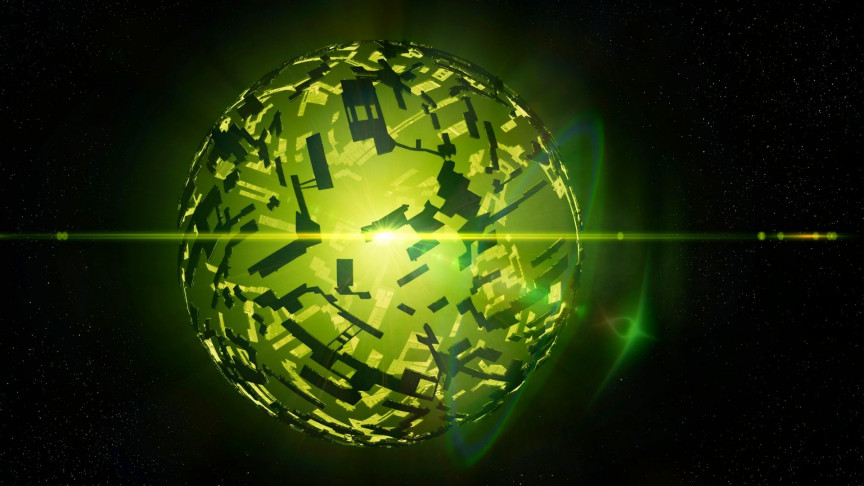 There are many different alien technologies depicted in books, movies, tv, and comics. None have quite captured the attention of science nerds quite like a completely theoretical contraption known as a Dyson Sphere. There are a few different versions of this technology, so we’ll be looking at several different ones, what they are, how they could be built, and analyzing whether humans are capable of building such structures. First of all… How advanced should an alien civilization be before we could expect such a complex structure?

The universe is estimated to have been around for almost 14 billion years. It would be extremely naive to posit that out of all of the hundreds of billions of galaxies in the universe, the Milky Way is the only galaxy with the conditions required to make intelligent life possible. Of course, we’ve yet to find any evidence that there is life — even in its most basic, primordial form — beyond our solar system, but of course, our technology to detect life beyond Earth is still in its infancy.

Nearly 50 years ago, a Soviet astronomer by the name of Nikolai Kardashev developed a scale — known as the Kardashev scale — which describes possible types of intelligent life in the universe on a scale ranging from I to III, based on how much energy the civilization might consume. Energy needs and technological prowess are intrinsically linked, according to Kardashev’s scale. To quickly summarize each level:

Type 0 civilizations are described as planets (or moons) that derive their energy through organic sources, which on Earth are substances such as crude oil, wood, and coal. Because of the constraints of producing the fuel and putting it to use, most of these planets — like Earth — have yet to come up with a feasible, safe way of exploring other worlds farther away.

Type I civilizations are described as alien societies that are able to harness all of the energy of their home planets and use this energy to meet the high energy requirements of their civilizations. Earth still hasn’t become a type I civilization, and it’s estimated that humanity would need to increase its energy threshold to over “`100,000 times the current level before it would qualify.

Type II civilizations are obviously even more advanced. This is about where a civilization that could build a Dyson Sphere would fall on the Kardashev scale. These civilizations have found ways to harness the full power of a star, converting and storing any energy the host star emits to suit the needs of society as a whole. He estimated that it might take a further 3,200 years before we have technology capable of catapulting Earth into a type II civilization.

Type III civilizations are the most advanced type of society described by the Kardashev scale — and we are far, far away from being able to achieve this level of energy independence. Such alien civilizations should be able to harness the power of entire galaxies, but this comes with its own set of constraints. Namely, the speed of light still applies, so these intelligent civilizations would have to develop some type of physics-defying warp drive in order to travel the distance between stars to gather their energy.

What Exactly Is a Dyson Sphere?

Ancient, advanced civilizations would likely require an extreme amount of energy to power up all of their different technologies. For this reason, science fiction writers (for example, in a book named “Star Maker” by Olaf Stapledon) were the first to devise a means of sucking up as much of a star’s energy output as possible. Named after Freeman J. Dyson — the very first theoretical physicist to propose such a structure could exist in a paper published in the 1960’s — the Dyson Sphere became one of the most popular examples of an alien megastructure.

So what is a Dyson Sphere? Well, in the simplest possible terms, it is a huge, artificial structure made up essentially of solar panels and mirrors in orbit around a whole star. It is intended to capture as much energy from its star as possible.

Currently, only a small percentage of a star’s energy makes it to a planet’s surface, so a Dyson Sphere would theoretically allow the civilization to gather up a much more significant chunk of energy for an alien civilization to use. (The Sun emits roughly 400 septillion watts per second, which is about a trillion times our current worldwide energy use).

It also gave astronomers a new way to look for signs of intelligent life. When his paper was first published, astronomers were scouring the skies, looking for any signs of an intelligent species using the first radio telescopes. Dyson correctly pointed out that we would only find these signals if alien intelligence wanted to be found. Instead, he proposed we look for unexplainable “heat waste,” which we could detect using tools that peer into the universe in infrared wavelengths.

“Such a dark object would be radiating as copiously as the star which is hidden inside it, but the radiation would be in the far infrared, around 10 microns wavelength… I propose then that a search for point sources of infrared radiation be attempted, either independently or in conjunction with the search for artificial radio emissions. A scan of the entire sky for objects down to the 5th or 6th magnitude would be desirable…” Dyson wrote in his paper.

Since building a Dyson Sphere is currently far outside of our technical expertise, one variant of the Dyson Sphere — known as a Dyson Swarm — has been proposed. Think of a Dyson Swarm as a series of small robot solar collectors, mirrors, living habitats, and satellites, orbiting like a net around a star. It would orbit a star close enough to collect an immense amount of energy, but not actually enclosing the star itself.

Energy would be transferred wirelessly between the individual components and Earth.

There are certain advantages and disadvantages with this hypothetical technology. Namely, it would be extremely difficult to put them all in a separate orbit that wouldn’t see them collide (which could have a tremendous effect on surviving probes, just as space junk is a big issue for satellites in low-Earth orbit) or eclipse one another and decrease the amount of energy they absorb.

The Dyson Bubble is sort of the bastard child of Dyson Spheres and Dyson Swarms. They’re essentially similar to Dyson Swarms in that they are composed of small robotic solar panels, suspended by use of enormous light sails, but different in that they orbit their star from the Goldi-locks zone – aka: the point at which “the solar pressure from solar wind and radiation is exactly equal to the gravitational force of the sun on the satellite” — essentially meaning these objects are completely stationary and not at risk of colliding with each other and causing a mess for surrounding probes.

The downside is that the area covered by the probes must be extremely large, In fact, it’s estimated it should be approximately several factors larger than the distance between Earth and the Moon. For scale, the moon is approximately 225,623 miles (363,104 kilometers) from Earth at its closest point. If you placed the statites at around 2.5 million miles from the sun, then their total surface area would need to be about 28 trillion square miles (72 trillion sq km). Naturally, it would require a lot of resources to build just one, let alone the hundreds needed.

Possibly the most well known version of the Dyson Sphere, but distinct in its own right, is a so-called Dyson Shell. Though popular, Dyson himself viewed the Dyson bubble as the least most plausible of the purported Dyson technologies.

A Dyson Shell is essentially, a giant all-encompassing shell, that completely surrounds the star, at a distance of roughly Earth’s orbit, with orbiting panels that would be linked together to create a shell. The structure would steal every bit of energy the star generates to be used for the betterment of the civilization. The civilization could then live on the inner surface of the sphere. Dyson wrote that “A shell of this thickness could be made comfortably habitable, and could contain all the machinery required for exploiting the solar radiation falling onto it from the inside.”

Not only would a Dyson shell block 99.99 percent of visible light, but it would require an extraordinary amount of stellar material to simply build it — perhaps more material than is in the entire solar system.

Additionally, it wouldn’t take much to perturb the structure’s orbit. A comet or asteroid hitting one part could result in the whole thing spiraling inward and crashing into the star. The forces of its own gravity could also be catastrophic, and if you wanted to generate some type of artificial gravity, it’s estimated that the object would have to be rotating at 0.4 the speed of light, or about 2,684 miles (1,200 km) per second.

There’s currently no precise estimate for how much it would cost to build a Dyson Sphere, Ring, Swarm, or Shell, but suffice to say, it wouldn’t be remotely cheap. In fact, it would be one of the largest, most expensive inventions of all time and there’s still no guarantee one of these pieces of technology wouldn’t fail within a few weeks. Looks like we still have a ways to go before we move to a type I civilization on the Kardashev scale.

Wonder if we have ever found one? Check out this article!