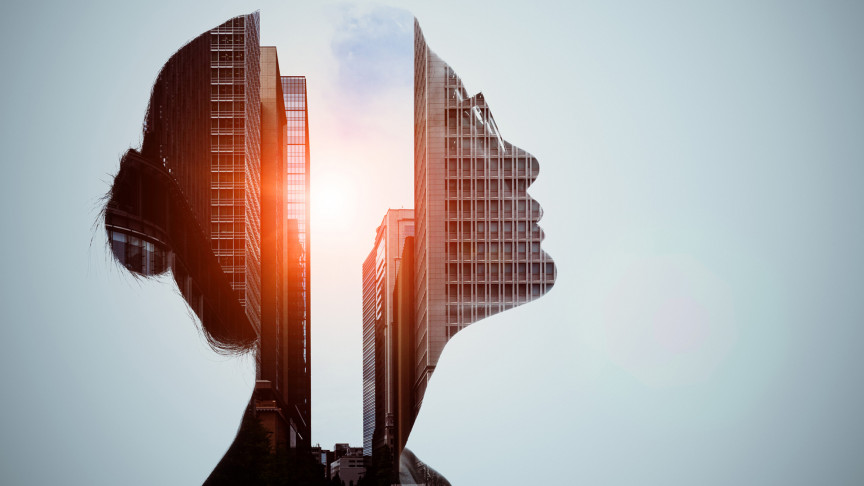 Right now, cities are in the midst of a global renaissance.

Over half of the world’s population resides in urban areas, with upwards of six billion people expected to reside in a city by 2045. The allure of city life brings a plethora of easily-accessible employment opportunities, close proximity to a variety of cultural hubs, and neighbors that will bang pots and cheer on essential workers when a global pandemic brings normal city life to a halt.

As urban living becomes more in-demand, however, problems persist that exacerbate the cycle of poverty – from pollution to high rates of crime and chronic unemployment. The rise of urbanization frequently comes at a steep cost to our health and the health of our environment. Transportation spews out greenhouse gases and particulate matter, new buildings and developments displace wildlife, and there are often shortages of green and open spaces in which to exercise and play.

So how do we build the city of the future— the city that’s sustainable, green, and healthy?

Enter the next stage of civilization, where humans are working to create micro-innovations that compound to create our future-topias.

From whales to turbines

The first of these breakthroughs come from an unexpected place: humpback whales. Humpback whales have unique bumps on their rostrum, or head, and pectoral fins. Called tubercles, these are, in fact, hair follicles. The tubercles improve hydrodynamics, allowing the whales to execute tight turns underwater and swim efficiently. The tubercles on their fins help to maintain lift, preventing stall, and decreasing the drag coefficient during turning maneuvers.

Professor Frank Fish at West Chester University, in Pennsylvania, realized that these tubercles don’t just add streamlining in water— they can also add streamlining in air, making them an optimal shape for wind turbine blades. These biomimetic blades are far more efficient than the typical wind turbine, generating more energy from each gust of wind. They could help make wind energy a more efficient source of power, even in places where normal wind turbines can’t spin.

Capturing the sun and ocean

In addition to wind power, there are a number of recent advances and innovations in water power, geothermal energy, and solar.

A parabolic trough is a type of curved solar thermal collector designed to capture the sun’s direct solar radiation over a large surface area and focus, or “concentrate it” onto a small focal point. This increases the solar energy received by more than a factor of two, which means more overall heat per square meter of trough.

The parabolic trough is generally constructed as a long parabolic reflecting mirror. A black metal heat tube sits inside a sealed glass tube. The heat tube contains a heat-transfer fluid which is pumped around a loop within the tube absorbing the heat as it passes through. In this way, the parabolic trough reflector can generate high temperatures more efficiently than a single flat plate collector.

Parabolic troughs are used in a number of solar facilities, including the Solana Generating Station in Arizona and the Genesis Solar Energy Project in California.

The kinetic energy of the ocean, stored and transferred in the form of waves, is also being used to develop other types of sustainable energy sources. After more than a decade of development, and five years of engineering and fabrication, the U.S. Department of Energy finally unveiled its Ocean Energy Buoy at Pearl Harbor in Hawaii. The project features an oscillating water column passing energy through a 500-kilowatt turbine.

We don’t just need energy to fuel our expanding cities—we also need energy to fuel our expanding populations. In the future, growing crops may involve a combination of natural methods and digital technology, namely artificial intelligence (AI). AI has been gaining significant traction as a way to decrease food insecurity, which according to the United Nations affects more than one in four of the world’s population. As climate change increases the unreliability of weather patterns and leads to increases in events like storms and droughts, crop failure could become a significant agricultural challenge for farmers.

AI-powered SaaS platforms like Prospera use data collection tools to gather information on crop conditions and review it to make suggestions on combatting crop ailments and improving yield. Prospera currently collects more than 50 million data points from 4,700 fields each day to identify pest or disease breakouts on farms, as well as the causes of poor crop yields. By assessing the causes of crop failures and poor crop productivity, tools like Prospera are positioning AI to dramatically increase agricultural yields.

Data, SaaS platforms, blockchain, and the Internet of Things could all be used in the future to track where your food originates, how much carbon has been used to produce it, and to help with choices like choosing only sustainably grown avocado for your toast, or the most energy-efficient tomato to garnish it with.

This type of data-driven supply chain management is already being used by the machine learning platform Journey Foods to help identify the best ingredients to use to improve nutrition, create sustainable products, and reduce the time and costs of developing a new product. Other innovations that are already here include indoor hydroponic farms and rooftop greenhouses to create hyper-local and efficient food markets inside your favorite skyscrapers and warehouses.

Lucky for us, the future is already here. Maglev, known by its full name as magnetic levitation, uses magnetic repulsion to move trains upwards of 350 miles per hour. They’ve already been deployed extensively in Japan, South Korea, and China. These trains release far fewer emissions and are far more sustainable than air travel. However, MagLev trains are extremely expensive to build and run — the US Federal Railroad Administration has estimated it will cost up to $100 million per mile to build the trains. And the oldest Maglev lines, such as the Shanghai line, have never made money and have been heavily subsidized, making them a poor option for struggling economies.

Perhaps a better option for reducing the carbon footprint of transportation is to switch entirely to electric vehicles. For example, in Europe, sales of all new gasoline-powered vehicles are being phased out by 2030. EVs and hybrids have also surged in popularity in the US in recent years. However, to ensure that electric vehicles truly have the lowest possible environmental impact, it’s important that the actual electricity-generating methods used are also “clean,” whether that’s through geothermal, wind, solar, or wave generation, or other means.

Another change coming to many cities is to ensure that they are pedestrian, bike, and e-scooter friendly, which cuts down on the smog produced by the traffic on huge highways (looking at you Los Angeles, and Research-Triangle Park, Beijing).

Even the sidewalks of the future may find themselves a sustainable twist. One startup, Platio, uses recycled plastic to create solar panels that it hopes can be used as walkways and sidewalks. Each solar cell is encapsulated by a recycled plastic shell that both allows for protection of the panel and for modular expansion of the sidewalk. The company suggests that the energy generated from these tiles will provide electricity for nearby housing and car charging stations.

Our future-topia wouldn’t be complete without people, and for that, we also need sustainable and affordable housing. The Six is an innovative homeless veteran housing and rehabilitation project located in Los Angeles, California, and designed by architects Brooks+Scarpa. The building itself was designed to have optimal environmental efficiency: it’s shaped for natural ventilation to save both money and electricity, oriented for optimal solar cooling to reduce heating and cooling expenditures, and uses recycled wood for large portions of the structure. It also has a green roof to provide food for residents while also improving air quality.

Perhaps the most innovative element of the Six is its social aspect. The building is designed with a central socialization area surrounded by employment offices, apartments, and resource centers to foster dialogue between residents and help its residents get back on their feet.

But what about the economics of future civilizations? It’s all fun and games to build the cityscape of the future in our imaginations, but the big question is how do we pay for it? Universal basic income? Cryptocurrency cats? Robot armies stuck in perpetual motion machines? Money trees?

Okay, that last one probably only exists in an Elon Musk multiverse simulation.

But in this universe, several organizations are working to crack the egg of a sustainable future to make an equitable lunch. The Venus Project aims to resolve global challenges of climate change, social inequality, and technological innovation, with the move to a resource-based economy.

Their central ideology focuses on the idea that global resource mismanagement is responsible for many of the challenges that face today’s society. By creating a social philosophy of the future with technical knowledge applied at a global scale to solve problems, the NGO hopes to create a fairer, more sustainable future. Their approach calls for changes in governance, economics, urban planning, education, human relationships, language, and values.

Applying this type of overarching system to deeply systemic issues like poverty has come under fire in recent years, as many see it as an oversimplification of complex problems.

Organizations like the Venus Project, however, point out that the adage  “what gets measured, gets counted” aptly applies to our modern economy, which relies heavily on the profit and loss balance sheet. There is growing dissatisfaction with a system that values tech IP higher than human capital, and values profits higher than finite earthly resources. Attention is commodified to the point that bot farms are more valuable than human user bases when many companies are chasing growth of numbers for number’s sake.

They suggest considering instead a balance sheet that includes environmental impact, health, diversity, and education, rather than an attention economy. A world in which users own their own data and profit more from the tech IPOs than their respective CEOs. We have a long way to go before someone builds out the math on this— Janet Yellen and Kristalina Georgieva, you have your work cut out for you.