What is Smart Clothing Technology and How Does it Work? 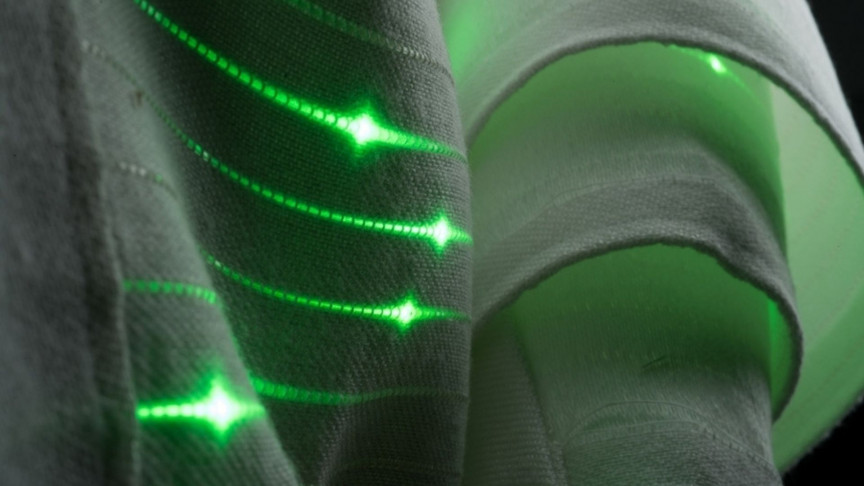 Modern fabric technology includes the intelligent modification of clothes to produce a determined effect. Clothes can be re-designed with the aid of technology to change colors, block sunlight, collect medical data, emit vibrations, or even display custom messages.

Here are some of the most amazing advancements in fabric technology and smart fabrics.

Hauberks, or chain mail shirts, were used in the Middle Ages, but they’ve certainly gone out of style, right?

Wrong. They’ve only transformed into something else. In 2021, engineers at the California Institute of Technology (Caltech) and the Nanyang Technological University (NTU) in Singapore created a chain mail-like material that goes from soft to stiff on command, bearing a load of 50 times its own weight when rigid.

To construct the fabric, the team layered together hollow plastic or 3D-printed aluminum particles which interlock, allowing them to change shape but retain their rigidity.

Unlike similar fabrics, which are “tuned” with electromagnetic fields, to make them stiffen or relax, the chain mail uses jamming transition. This is the same principle that causes a bag of vacuum-sealed rice to stiffen because the grains have no room to move. The particles are sealed into vacuum bags in a similar way. The fabric can support up to two pounds of weight when stiff, which is more than any other smart fabric designed to date.

“Granular materials are a beautiful example of complex systems, where simple interactions at a grain scale can lead to complex behavior structurally. In this chain mail application, the ability to carry tensile loads at the grain scale is a game-changer. It’s like having a string that can carry compressive loads. The ability to simulate such complex behavior opens the door to extraordinary structural design and performance,” said José Andrade, Professor of Civil and Mechanical Engineering with expertise in granular material modeling.

Potential applications for this fabric include protective armor, adaptive casts that change stiffness as the patient heals, bridges that can be rolled out and then stiffened in place, and exoskeletons, potentially allowing those with mobility issues to walk normally.

Back in 2016, scientists at the Royal Melbourne Institute of Technology, in Australia, developed a self-cleaning fabric by “growing” copper and silver nanostructures on the cotton fibers of a piece of cloth. The process of getting the metal nanostructures onto the textile involved priming the cotton fabric using an acidic solution of tin chloride, then dipping the fabric into a palladium salt solution, causing palladium (a rare metal) nuclei to spontaneously form on the fibers. Finally, copper and silver baths led to the growth of photoactive metal nanostructures.

The metal atoms of these nanostructures get excited with light. When exposed to light, the material is able to break down organic matter, cleaning itself of stains and grime in less than six minutes.

The invention may be useful in catalysis-based industries, such as agrochemicals and pharmaceuticals, but there is still more work to do to improve the technique and especially, to try and ensure that metal nanoparticles are not released into the wastewater (if the clothes are actually washed), leading to environmental issues.

Silver nanoparticles have also been used to prevent odors by killing bacteria, but they can become toxic ions under certain conditions.

Fabrics that cool you down

Using air conditioners and electric fans to cool down accounts for nearly 20% of the total consumption of electricity used in buildings. So what if people could avoid heating up in the first place?

In 2020, a team of researchers from Stanford University (USA) and Nanjing University (China) modified a few pieces of silk —a fabric that already feels cool over human skin because it reflects much of the sunlight that strikes it— to make it reflect up to 95% of sunlight. This way, they managed the silk to stay 3.5°C cooler than the surrounding air in the sunlight.

The scientists achieved this by adding aluminum oxide nanoparticles to the silk fibers. These nanoparticles are able to reflect the ultraviolet wavelengths of sunlight and it proved so by keeping skin about 12.5°C cooler than cotton clothing.

First, the scientists used simulated skin made from silicone skin to test the product. When they draped the engineered silk over the simulated skin, it kept the skin 8°C cooler under direct sunlight than natural silk.

Then,  they made a long-sleeved shirt from the engineered silk and asked a volunteer to wear it while standing out in the sun on a 37°C day. By analyzing infrared images, the researchers found out that the modified silk did not warm up as much as natural silk or cotton textiles.

More than a year earlier, a team of researchers from The University of Manchester’s National Graphene Institute designed new smart textiles for heat adaptative clothing by taking advantage of the infrared emissivity (the ability to radiate energy) of graphene.

“Ability to control the thermal radiation is a key necessity for several critical applications such as temperature management of the body in excessive temperature climates. Thermal blankets are a common example used for this purpose. However, maintaining these functionalities as the surroundings heats up or cools down has been an outstanding challenge,” said the leader of the research, Professor Coskun Kocabas, at the time.

In 2016, researchers from the Georgia Institute of Technology in Atlanta created a fabric that harvests energy from both sunlight and motion.

To make the fabric, the team wove together strands of wool, solar cells constructed from lightweight polymer fibers with fiber-based triboelectric nanogenerators. which generate a small amount of electrical power from mechanical motion such as rotation, sliding, or vibration.

The fabric is 320 micrometers thick and is highly flexible, breathable, and lightweight. The team envisions it could one day be integrated into tents, curtains, or even clothing.

One day, this technology could even help us charge our phones on the go.

“The objective was to harvest energy from our living environment (…). The goal is to drive small electronics,” said Zhong Lin Wang, one of the nanotechnologists authoring the investigation. “And this research recently attracted a lot of attention because these days, flexible electronics, wearable electronics, have become very popular and fashionable. But each of them needs a power source.”

In June 2021, engineers at the Massachusetts Institute of Technology developed “programmable fibers” that could let us carry data in our clothes.

The fibers are made of silicon chips that are electrically connected to each other. This way, they can have a certain file storage capacity that can last up to two months without extra power.

According to senior researcher Yeol Fink, these digital fibers could also act as sensors to monitor physical performance and possibly even detect diseases, especially if they integrate a neural network. A neural network can help predict the user’s activity and body patterns and eventually produce the early detection of a respiratory or a health problem.

Fitness watches are not the only wearable devices that can monitor your activity, heart rate, sleep habits, etc.

There are also activewear, workwear, sleepwear, and even underwear that do that through sensors.

Linking with an app, the underwear created by the award-winning smart textile company Myant measures stress levels, stationary time, and other common options for wearable devices, as well as ovulation and driver fatigue.

In 2020, MIT researchers also created a washable sensor that monitors the vital signs of the wearer and has the potential of becoming the next big revolution in the remote healthcare field.

Meanwhile, the Empa research center in Switzerland has integrated optic fibers into smart textiles to control the skin’s circulation to avoid bed sores for immobile patients.

On the other hand, Danish company Edema ApS created washable stockings modified to detect changes in leg volume, which is especially useful for patients suffering from fluid accumulation or potential blood clots in that part of the body.

As you can see, there are several applications for smart clothing, and many others are expected to appear anytime soon. And while smart clothes may not be mainstream yet, they may someday revolutionize the way we dress, one way or another.