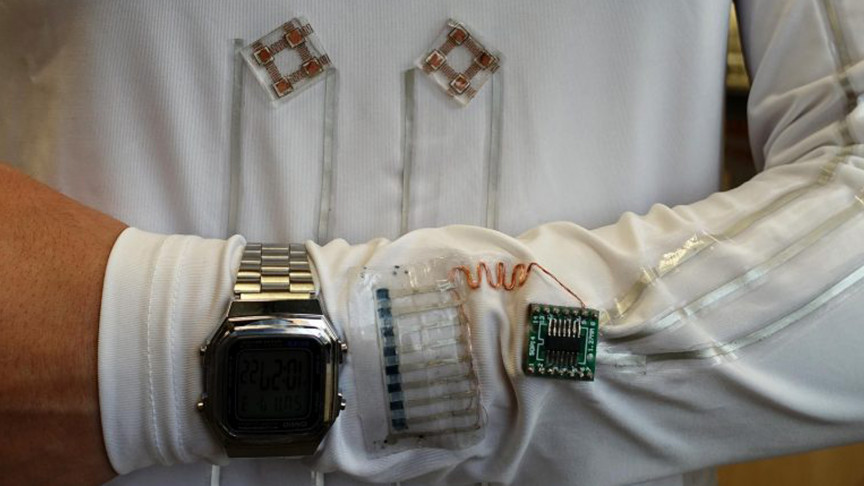 Wearable systems that enable users to power numerous devices might feel like a technology that belongs to a far-off future — however, it seems like it won’t stay that way for long. Nanoengineers at the University of California San Diego have now developed a “wearable microgrid” that can power small electronics by using the energy the human body generates.

Harvesting and storing the energy from both movement and sweat, the system has three main parts that are flexible, washable, can be screen printed onto clothing: sweat-powered biofuel cells, motion-powered devices called triboelectric generators, and energy-storing supercapacitor, per a press release by the university.

The new system, which was detailed in a paper published in Nature Communications, is inspired by community microgrids which are a way for neighborhoods, villages, towns, and cities to meet their energy needs locally.

“We’re applying the concept of the microgrid to create wearable systems that are powered sustainably, reliably, and independently,” explained co-first author Lu Yin, a nanoengineering Ph.D. student at the UC San Diego Jacobs School of Engineering. “Just like a city microgrid integrates a variety of local, renewable power sources like wind and solar, a wearable microgrid integrates devices that locally harvest energy from different parts of the body, like sweat and movement, while containing energy storage.”

The wearable microgrid can power devices quickly and continuously thanks to the energy harvested from movement and sweat. Once the wearer starts moving, the triboelectric generators start providing power instantaneously. The biofuel cells came into action when the wearer starts to sweat and continues to give powers until the wearer stops moving.

“When you add these two together, they make up for each other’s shortcomings,” Yin explained. “They are complementary and synergistic to enable fast startup and continuous power.”

They do complement each other indeed: the system works two times faster than those with the biofuel cells alone as well as lasting three times longer than the triboelectric generators alone.

The conducted experiments showed that the system was able to power either an LCD wristwatch or a small electrochromic display throughout 30-minute sessions that consisted of 10 minutes of either exercising on a cycling machine or running, followed by 20 minutes of resting.

While the system can be especially useful for athletics, the researchers stated that they are not limiting themselves to just this design. “We can adapt the system by selecting different types of energy harvesters for different scenarios,” Yin said. The next goal will be to come up with design in which energy can be harvested while sitting or moving slowly.