We Could Send Humans to Exoplanets – In 19 Years? 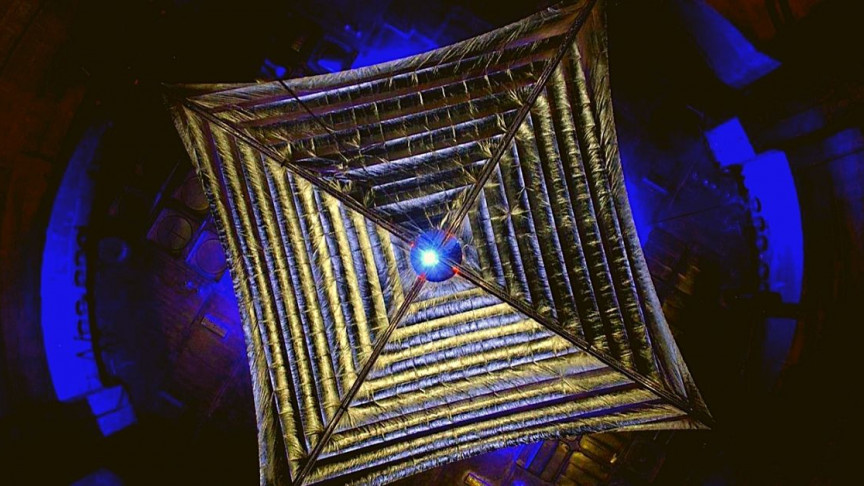 A combination of near-future technologies might send people to the Alpha Centauri system — home to a possibly habitable exoplanet — at nearly one-quarter of the speed of light, according to a recent paper published in the preprint service arXiv.

RELATED: A FASTER-THAN-LIGHT WARP DRIVE-POWERED SPACESHIP MAY BE POSSIBLE

An amateur astronomer Alberto Caballero authored the study, which proposes the concept and design of a new spacecraft he names Solar One — which he believes should integrate a larger version of NASA’s Sunjammer light sail, the U.S. Navy’s compact fusion reactor, and numerous DE-STAR laser systems.

The new concept calls for a mile-long (1.6-km) light sail, and Caballero said Solar One might reach “an average of 22 [percent] the speed of light, arriving to the closest potentially habitable exoplanet in less than 19 years with the help of a Bussard scoop,” according to the study.

Solar sailing is a term first coined when science fiction writer Arthur C. Clarke published his 1964 short story “Sunjammer” — which features a small spacecraft powered without the use of expensive propellant like rocket fuel. Instead of using chemical combustion, the spacecraft uses large, mirror-like sails to harness the force of a star’s light.

Meanwhile, the U.S. Navy’s compact fusion reactor (CFR) is a new nuclear technology — still in development — that smashes atoms together to create bountiful energy. In theory. As of writing, no fusion reactor has managed to produce more energy than it consumes, Popular Mechanics reports. But nearly every plan for upcoming spaceflight calls for some type of nuclear reactor for propulsion.

In its creators’ words, DE-STAR is “a modular phased array of kilowatt class lasers powered by photovoltaics.”

The Bussard scoop Caballero references is more interesting than any of the untested ideas listed as necessary for his Solar One spacecraft.

Not unlike a whale’s baleen, skimming protons from volumes of cold space and transmuting the particles into a nuclear rocket. As a cached NASA page explains, “There are a variety of limitations to this concept, such as how many protons can be scooped up, the drag created from scooping them — not to mention getting these protons to engage in nuclear fusion for a rocket.”

As SpaceX and NASA move to put humans on the moon again, with aims to also fly to Mars, we can begin to look past the planets of our own solar system — where we’d at best have to build our own habitats to survive — to potentially habitable planets never seen up-close, orbiting stars like Alpha Centauri, and beyond.