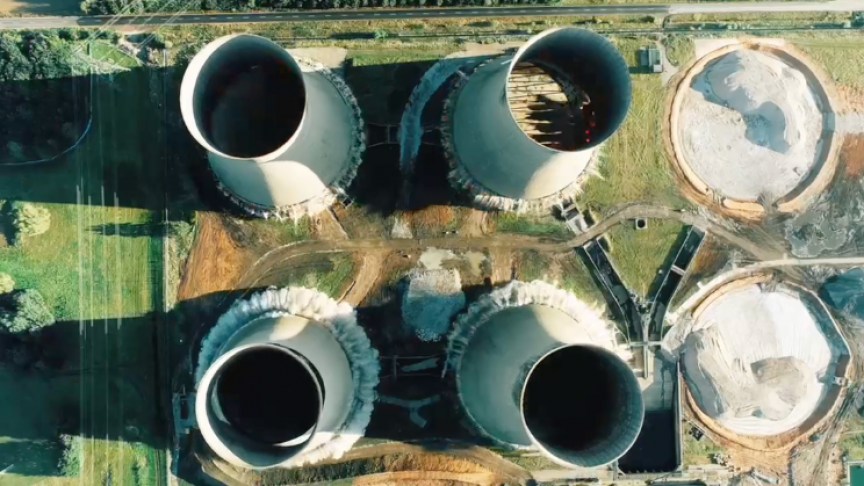 On a calm Sunday morning in October, 50 employees of the UK-based DSM Demolition worked with the local police force in North Yorkshire to close off roads and secure over an area over 1,100 feet (350 m) in diameter. Just after 9:00 AM, the following happened:

The site of the planned demolition was the Eggborough Power station, a coal-fired, 1,960 MW power plant in the northern part of the U.K. that was decommissioned in 2018. The plant had a total of eight cooling towers, four of which were demolished in August this year.

The remaining four, pictured above, presented a challenged to the demolition crew as the nearly 300-feet (90 m) tall towers were located extremely close to utility infrastructure. Switchgear and overhead lines belonging to the National Grid were located within an uncomfortable 200 feet (60 m) of these towers, according to a press release.

Speaking about the planned implosion, James Fincham, Project Manager at DSM, said, “18-months of planning and work on-site to achieve what has been accomplished today is a testament to the demolition team and all involved with the project.”

The DSM crew met in advance with local councilors in the area to explain their planned approach for the demolition. Coordinated efforts with electricity and gas providers in the area ensured that utility supplies were not interrupted. Working with the local police, DSM employees secured a perimeter by implementing localized road closures to safeguard the public.

Using state-of-the-art surveillance technology that included heat-seeking drones, the team ensured that the area was free of people before the demolition. Additionally, the team also took measures to ensure that the work did not cause excessive environmental nuisances, the press release said.

The implosion occurred at 9:01 am on Sunday, October 10, and has significantly altered the view of the landscape as the power plant was built in the late 1960s. Remaining parts of the plant will be removed over the next couple of years. Once work is completed, construction on a new, 2,500 MW gas-powered power plant will begin.