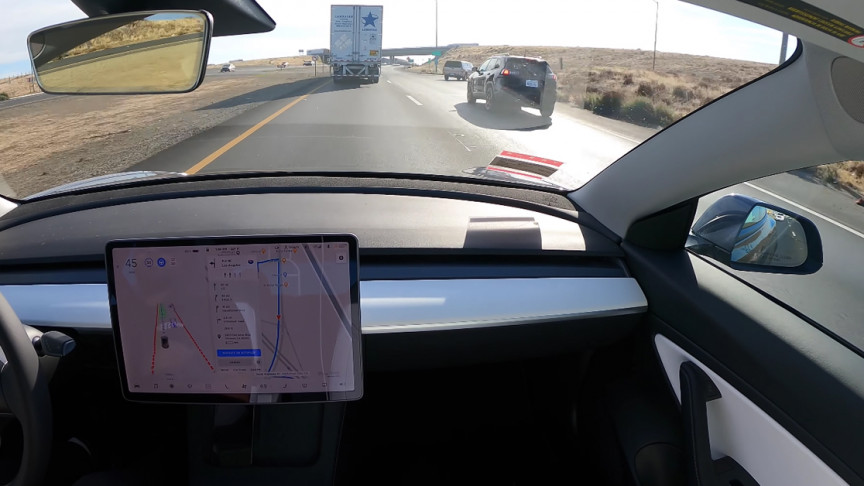 Tesla owner and enthusiast Whole Mars Catalog posted a timelapse video of the trip on YouTube, during which the Tesla Model 3 transitioned from the “FSD beta” in inner-city areas to “Navigate on Autopilot” when it was cruising down freeways.

The drive wasn’t completely untouched by human hands. As Whole Mars Catalog points out in his video description, after passing the border of Los Angeles, “there was one tiny intervention where a giant piece of debris on the road popped up suddenly after a car moved out of the way.”

“To be cautious I couldn’t wait to see if FSD would avoid it and had to make sure to move over myself,” the description continues. “But besides that one second of grabbing the steering wheel, there were no interventions from start to destination.”

The driver did also stop at two Supercharger stations along the way. At Market Street in LA, the car exhibited some strange behavior when it changed to the adjacent lane, the driver says.

Otherwise, with only a little over two months since Tesla started to roll out its limited Full Self-Driving beta, this looks like a pretty seamless example of the technology in action — one that could be seen as an indicator of what the future has in store.

‘A milestone for long-distance autonomous travel’

Since last October, FSD beta has received several updates and improvements. The Limited Full Self-Driving was an overhaul of the system that allowed the company’s all-electric to navigate inner-city streets.

The system is a little controversial due to its title — detractors argue that it should not be called ‘Full Self-Driving’ as Tesla advises that the driver should always be alert and ready to take over steering.

Nevertheless, this trip from San Francisco to Los Angeles is an indicator that Tesla is making steady progress towards autonomy via several onboard cameras, radar, ultrasonic sensors, and real-world driving data.

“This is a milestone for long-distance autonomous travel using only cameras, and I expect to see many more like it,” Whole Mars Catalog says.

You can watch the timelapse of the FSD beta trip from San Francisco to Los Angeles in the video below.