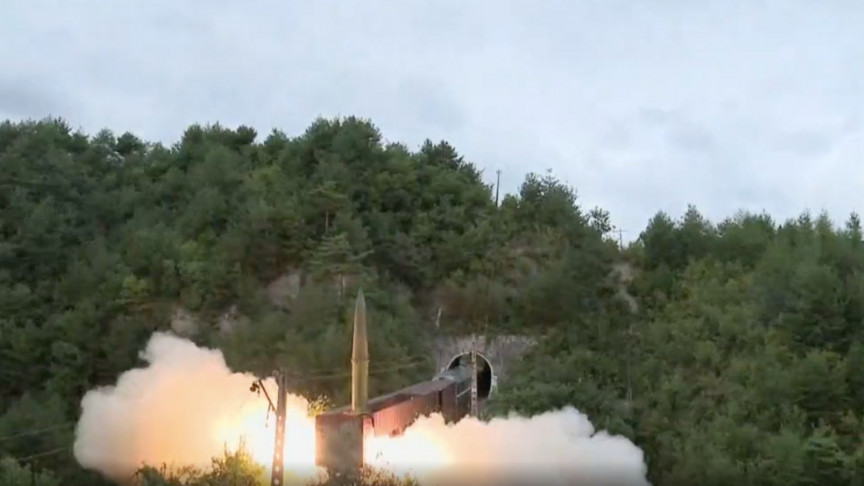 Within days of launching a nuclear cruise missile that could potentially go undetected, North Korea has made another big revelation, launching ballistic missiles from trains. The state media released a video and a press release that provided a history of the development of the technology and its intended use.

According to the release, the Eighth Congress, which was earlier in January this year, organized  the Railway Mobile Missile Regiment and tasked it to deliver “the ability to more actively cope with all sorts of threats.” The drill was conducted in s central mountainous region, which they kept as a secret, to test the practicability of the system, evaluate the combat preparedness of the new regiment and its ability to perform firepower missions, the press release said.

According to the press release, the fired projectile struck its target located almost 500 miles (800 km) off the eastern coast. Pak Jong Chon, a member of the Presidium of the Politburo in the country reportedly called the system an “effective counter striking means to deal a heavy blow to threatening forces multi concurrently with dispersive firing across the country.” He also called the system in line with the modernization policy of the country.

Given the extensive rail network in North Korea, a mobile system for missile launch makes tactical sense. However, it is not a North Korean invention, neither a modern tactic. Russia attempted this earlier and so did the US during the Cold War. Ankit Panda, a Senior Fellow at the Carnegie Endowment for International Peace and Author of ‘KIM JONG UN AND THE BOMB’ tweeted some other concept images of such systems.

Anyway, this is not a North Korean innovation. pic.twitter.com/Ybo5G4TtPc

Interestingly, Panda had predicted this move in his book published last year. Offering rapid mobility of arsenal that can be practically launched from anywhere, the system can also be protected from enemy surveillance by hiding them in tunnels and also by running other decoy trains, stretching resources. Combined with other attack modes that the country has developed, it can really stress systems that can work effectively over a smaller focus.

In a Twitter thread, Panda reckons that next on the list of launches from such a system would be intercontinental ballistic missiles (ICBMs). He then goes on to mention that the “diverse set” of technologies that the country seems to deploy is a strategy of “survivability through complexity,” which is not only expensive but also unlikely to be fielded, in case of a conflict.

To counter these, South Korea is working on its own Iron Dome.