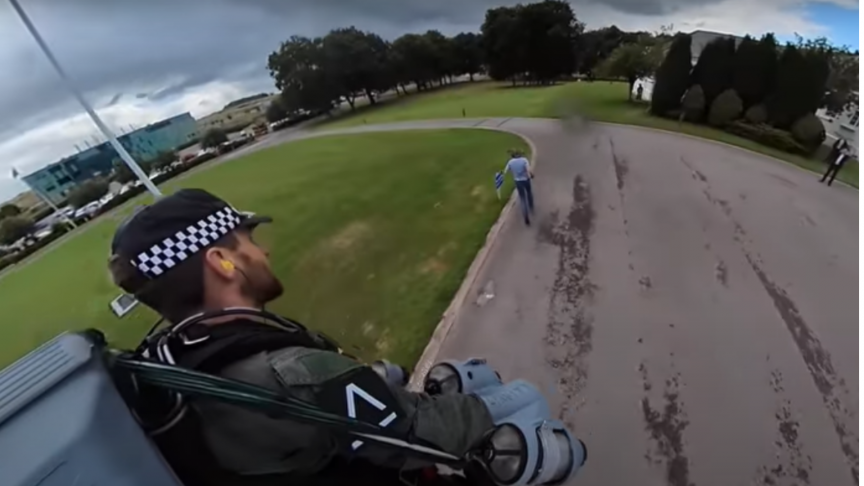 At a checkpoint, the police identified a man with a gun. When confronted, the man began to flee. While one officer chased him, another activated his jet suit and flew over the area, outrunning him and containing the threat immediately. This might sound like a scene from a futuristic movie but the scene was played out recently during a demonstration of jet suits for a police squad in the UK.

The man who played the role of the “flying officer” was actually the founder and Chief Test Pilot of Gravity, a company that builds jet suits for human flight. Established in 2017, Gravity Industries makes compact jet suits that power flight through jet thrusters that are mounted on the user’s hands.

The company, which also claims to have the world’s first patented jet suit, offers jet suit flight training programs as well. It has worked with over 50 clients in the US and the UK and also participated in search and rescue and military collaborations. Founder, Richard Browning, a Royal Marine Reservist himself, even showcased the suit to the Royal Marines in May.

The recent demonstration was carried out at the Defence Science and Technology Laboratory (DSTL) in Porton Down near Salisbury in the UK. It was attended by government officials and senior police personnel.

After the demonstration, the Chair of National Police Chiefs Council Martin Hewitt said that the technology had potential and would be interested to see how the technology could be applied in a policing environment to help police officers “… do their job better, do it quicker, keep people [and] themselves safe.“

Although he was impressed with the technology, he did call it a “bit noisy.” With five turbines that can reach up to 120,000 rpm, the system is bound to make some noise. While the demonstration doesn’t showcase it, the jet suit has a maximum speed of 55 miles per hour (88 km/h). Its fastest flight has been recorded at 85 mph (136 km/h). With a dry weight of just under 60 pounds (27 kg), this customizable jet suit can use both Jet A1 as well as diesel as fuel. The only shortcoming would be the limited flight time of 5-10 minutes.

Would this be enough to catch the Jet-pack Man at Los Angeles Airport? That definitely would be an interesting test of power for this suit.