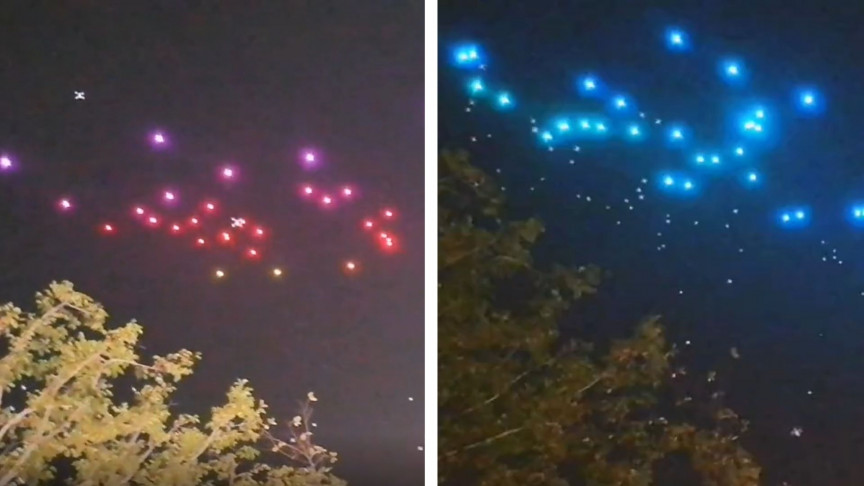 Drones came crashing down into crowds of people that came to see the machines put on a light show over the weekend, a report from Vice reveals.

The performance, which took place above a shopping center in the city of Zhengzhou, China, on Friday, Oct. 1, ended disastrously with video footage (included below) showing drones plummeting into cars and buildings. Thankfully, no injuries were reported after the incident.

The video footage shows approximately 200 drones forming the name of the shopping center before many of them went dark and started falling to the ground. Spectators were then seen running and shouting to others to “be careful” and to move away. In a news report by Henan TV, a witness stated that roughly 5,000 people, many of them children, were present when the drones started raining down from the sky.

Another witness told Vice that staff members allowed people to run into the shopping center to seek cover. They also explained that some of the drones crashed very far from the original light show and were seen hitting trees as they came down. So far, no one knows what it is that caused the failure, though Vice reports that an organizer told China News Services the issue might have been caused by “operations errors.”

Drone light shows are pre-programmed in order to safely fly the machines in a synchronized pattern for observers. Though accidents can occur, one light show operator, Verge Aero stresses that “shows are flown by certified pilots, experts in relevant aviation subject matter, including regulations and weather.”

Still, human error can cause drone crashes and there are recorded instances of people intentionally sabotaging drone operations and performances with jammer technology. In 2018, for example, the South China Morning Post reported that at least $127,500 in damages were caused when unknown individuals are thought to have used jammer equipment on a drone light show in Hong Kong, causing 46 drones to come crashing to the ground. In August this year, reports emerged of a police-operated drone in Canada crashing with a landing Cessna plane, causing considerable damage, though no injuries.