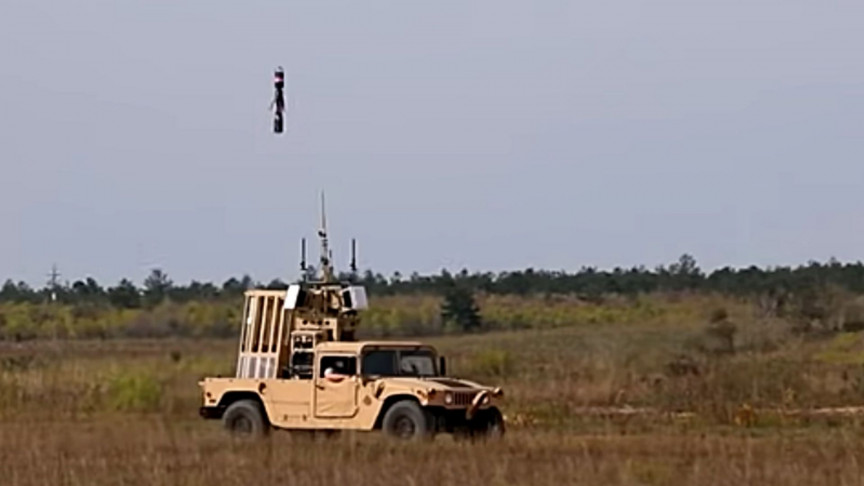 The Counter-Unmanned Air System (C-UAS) brings down enemy drones by launching interceptor drones that shoot stringy streamers at them. The goal of using streamers rather than, say, the Iron Dome’s interceptor missiles, is to protect high-value convoys moving through populated areas without causing too much collateral damage.

Ultimately, the hope is that the biggest damage would be the enemy drone crashing down to the ground.

How the defense system works

DARPA’s technology uses a newly-developed X band radar that senses and identifies drone threats automatically. The system then pairs the attacking targets with specific interceptors thanks to an automated decision engine linked to a command and control system. It then launches and guides its own drone interceptors that have two types of drone countermeasures.

The main drone countermeasure shoots strong, stringy streamers at the enemy threat that end up catching and mixing in the drone’s propellers leading it to crash. It sounds simple, but a lot of work went into the development of an integrated solution of sensors, autonomy, and mitigation solutions so that they would be more robust than current systems.

“Because we were focusing on protecting mobile assets, the program emphasized solutions with a small footprint in terms of size, weight, and power,” said MFP program manager Gregory Avicola in DARPA’s Tactical Technology Office. “This also allows for more affordable systems and less operators.”

In the demo video DARPA posted on YouTube, you get to watch the moving truck launch a defense drone into the air, followed by a bright puff of red stringy streamers that get entangled in the enemy threat’s propellers before it heads straight down to the dusty ground.

Measures and systems to counter unauthorized or enemy drone attacks, including swarms of drones, are advancing, as can be seen through the U.S. Air Force’s THOR system that uses laser beams to obliterate large swarms of drones in one go.