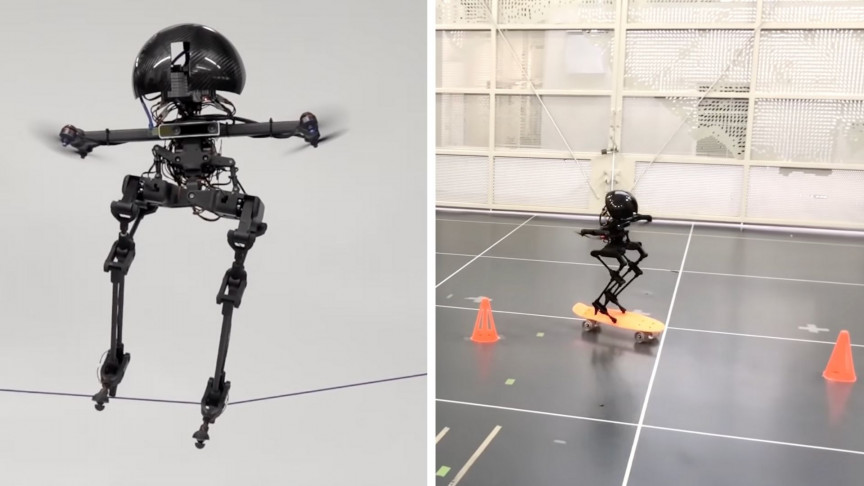 A team of roboticists from Caltech combined two of the world’s most eye-catching technologies — drones and bipedal robots — with their new robot called Leonardo.

The Caltech team unveiled their new bipedal robot Leonardo this week in a paper published in the journal Science Robotics. Alongside their paper, they released footage of the robot walking a tightrope and also navigating around cones on a skateboard.

Leonardo, which stands for “LEgs ONboARD drOne,” was designed partly to mimic birds that are able to hop and walk at the same time as using their wings for balance. Instead of wings, however, Leonardo, or LEO for short, has two drone propellers where it would otherwise have its arms.

According to a press statement from Caltech, “LEO is the first robot that uses multi-joint legs and propeller-based thrusters to achieve a fine degree of control over its balance.” LEO is able to combine its flying and walking abilities to traverse tricky terrain and even perform a few party tricks in Caltech’s video (below), which is comparable to some of Boston Dynamics’ best viral robots clips. Some of those Boston Dynamics videos famously show members of staff shoving their bipedal Atlas robot and prodding it with a hockey stick to show off its ability to keep balance.

LEO could be a precursor for future Mars rotorcraft

The Caltech team explains that LEO also displays impressive balance due in part to its drone-like design. “Because of its propellers, you can poke or prod LEO with a lot of force without actually knocking the robot over,” says Elena-Sorina Lupu, a co-author of the paper. Next, the team hopes to improve LEO’s performance by making its legs more rigid so that that they can support more weight and increase the thrust force of the machine’s propellers. They also hope to enhance the robot’s AI capabilities so as to allow it to automatically support more weight with its propellers if required — such as when walking on rough terrain.

“In the real world, the technology designed for LEO could foster the development of adaptive landing gear systems composed of controlled leg joints for aerial robots and other types of flying vehicles,” the Caltech scientists explain in their press statement. The vision is one truly out of sci-fi, whereby an aircraft or spacecraft is able to land on uneven terrain due to adaptable legs and rapid auto-correction via small propellers. In fact, the team behind LEO believes its technology could one day be used for Mars rotorcraft where it could improve safety and efficiency and bolster our ability to explore the red planet.