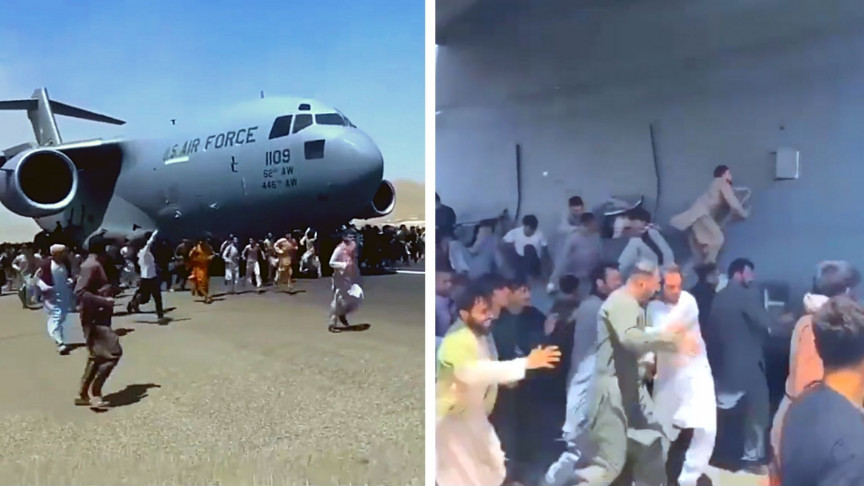 In power vacuums, city infrastructures are thrown into chaos.

A video has surfaced depicting dozens of desperate Afghan people swamping a United States Air Force aircraft as it took off from the Hamid Karzai Airport in Kabul, Afghanistan, portrayed in a tweet. But this is, sadly, just the tip of the iceberg.

With seemingly no consideration for the fate of the people of Kabul (and Afghanistan in general), the modern societal systems made possible by engineering and science may crumble, putting lives at risk.

Panic at Kabul airport as societal systems are abandoned

The video reveals dozens of Afghan people running next to the aircraft and attempting to grasp onto it as it moved down the runway. Other videos showed more shocking scenes, like bodies falling off of military planes after takeoff, plummeting to their deaths. These images come amid widespread chaos following the pull-out of U.S. forces from the country, which was occupied for twenty years in the wake of the Sept. 11, 2001 attacks. Throughout the city, thousands of Afghans rushed to the airport with aims of boarding flights out of the country, but for most of them, this was not to be, since the country’s Civil Aviation Authority declared that all commercial flights leaving Kabul were canceled.

While this and other harrowing videos have a political cause, there’s much more going on. The entire city of Kabul, along with its labyrinthine infrastructure, was literally built with scientific and engineering advancements used throughout the world for hundreds of years (much of it far older). You don’t need to take a side in the current U.S. exit or geopolitical shifts to observe how, in a political vacuum, the systems built to support modern society can turn against the general populace, with power outages, closed transportation hubs, and things go especially badly when these systems aren’t considered at all.

These shocking visuals from Kabul today describe the US withdrawal from Afghanistan. Betrayal. Escape. Lack of empathy. No clarity. Failure. Chaos. pic.twitter.com/UCDMC7CffT

And, while these scenes of mass struggle and fear continue amid the colossal shift in political power in Kabul, they’re also reminiscent of other major catastrophes and failures. Consider, for example, the damage left in the wake of Hurricane Katrina. When it tore through the United States’ Gulf Coast in 2005, the city of New Orleans’ levee system experienced a failure, leading to unprecedented flooding, with roughly 80% of the city and its neighboring parishes submerged in harmful floodwater. Needless to say, the city saw the highest fatality rates, and, as one of the deadliest engineering-adjacent disasters in the country’s history, it raised serious ethical concerns.

However, the engineering itself was not to blame. In the decades leading up to Hurricane Katrina’s landfall, a pattern of compromising decisions on the safety and robustness of New Orleans’ levee system were made to save on costs, adapt to scheduling conflicts, and, sadly, give in to political pressure, according to an archived study from the American Society of Civil Engineers. Unlike the infamous faulty O rings that sealed the fate of NASA’s space shuttle Challenger, the disaster of New Orleans had no single engineering cause. Instead, a cohesive failure in the human systems of logistics, governing bodies, and political interests came together in their own perfect storm to undermine the ability of authorities and engineers to maintain one of the most basic technological features of low-lying cities by large bodies of water: maintaining the levees.

The chaos in Kabul is very different, since the storm of disorder in the streets and airport are more abstract. But there appears to have been little to no emergency exit plan put into place for citizens of the U.S., U.K., several embassies, and the countless Afghan people who worked with Western nations that are now stranded under a new ruling political establishment that may or may not seek reprisals for aiding their former enemies. Airports are an extremely complex synthesis of advanced aerospace and avionics technology, scheduling, international coordination, traffic, and much more made possible with science and engineering. But without adequate funding or advanced planning, these sites of modern convenience can (and do) transform into a nightmarish confluence of panic, potentially ruining lives. It seems no matter how advanced our technological or engineering feats become, they will fall like a house of cards without a healthy infrastructure designed with the worst in mind.