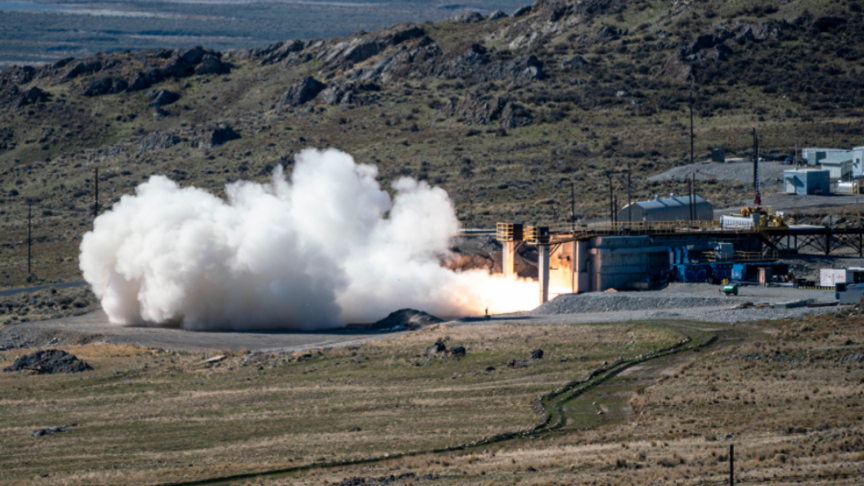 In its bid to supply the U.S. military with a hypersonic missile, U.S. Navy’s Strategic Systems Program (SSP) has been developing its own iteration of the long-range weapon and recently conducted a test of its Solid Rocket Motor (SRM), a press release said.

The race for hypersonic weapons is heating up. With Russia claiming successful test fires of its Tsirkon missiles, China having allegedly tested a weapon technology that could evade U.S. defenses, and a recent test failure of a hypersonic weapon, the U.S. military has been under severe pressure to keep up. The Navy’s SSP has some good news to offer.

Developed as part of its Conventional Prompt Strike (CPS), the first stage SRM was successfully tested at Promontory in Utah. According to the press release, this is the second test of the SRM following the first and second stages were tested earlier in May and August this year, respectively. The live fire test was the first time, a thrust vector control – a key component that allows missiles to be maneuvered during flight, was included, the SSP reported.

The other component of the weapon system is the Common Hypersonic Glide Body (CHGB), the press release said. Although being developed by the Navy, the U.S. Army is also a contributor in the effort that also includes national government laboratories and the industry. Once developed, the missile will also be used by the Army as a Long-Range Hypersonic Weapon (LRHW). The common missile design for the land and sea-based weapons will offer the military economies of scale during the production stage, the press release added.

“Fielding hypersonic weapon is one of the highest priority modernization areas the Department of Defense is pursuing to ensure our continued battlefield dominance, and the joint team did a tremendous job executing this test and keeping us on schedule,” said LTG L. Neil Thurgood, Director of Hypersonics, Directed Energy, Space, and Rapid Acquisition.

With this test, the U.S. military has moved further in the design validation of its hypersonic missile and is on schedule for its full flight test, Vice Adm. Johnny R. Wolfe, the director of the SSP, said in the press release. The flight of the combined CHGB and its rocket is scheduled before autumn 2022, Reuters reported.