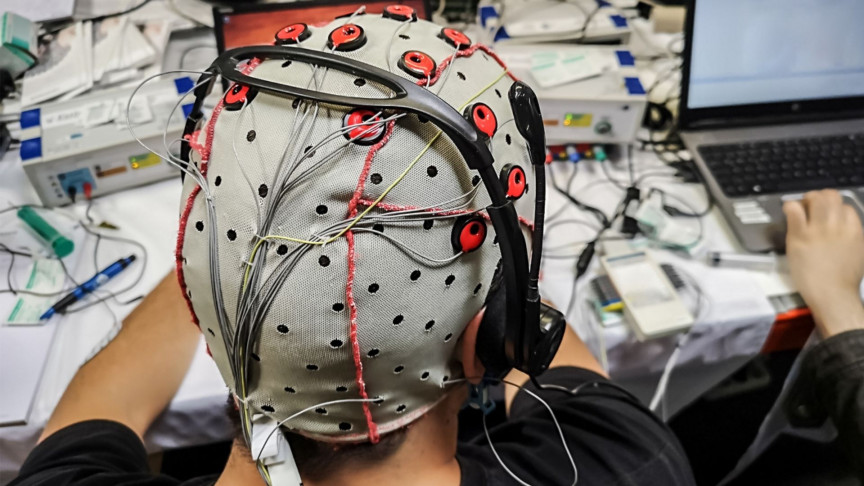 We’ve all experienced brain fog and the drowsiness that comes with getting too little sleep. But what exactly happens in our brain during sleep that prepares us for another day in the morning? To understand how the brain disposes of so-called “metabolic waste”, teams of researchers are working on a study with a $2.8 million funding from the U.S. Army who is looking to combat sleep disorders among the military. The scientists’ ultimate aim is to develop a “sleeping cap” that would analyze how fluids within the brain may be flushing out toxic, memory-impairing proteins while you sleep.

A 2019 study on the role a watery liquid known as cerebrospinal fluid (CSF) played in brain chemistry, showed that as you fall asleep, the CSF “washes” your brain in pulsing waves. The CSF is part of the “glymphatic system,” discovered relatively recently in 2012. It behaves similarly to the lymphatic system but is controlled by brain cells known as glial cells. The system moves a large amount of CSF through the brain on a daily basis, making sure misfolded proteins and other biochemical waste are washed away.

The 2012 study found that CSF is pumped around the brain through a network of conduits that surround arteries and veins. The CSF washes through brain tissue collecting in vein-adjacent channels and draining back out of the brain.

One of the scientists involved in the study, Electrical and Computer Engineering Professor Behnaam Aazhang of Rice University, explained in a press release that the military wants, “to understand the glymphatic system and what happens when soldiers lack sleep.” He added that “if a measurement says the flow is not sufficient, that’s a red flag.”

How the cap would work

The sleeping cap that the researchers aim to create would be lightweight and portable, with the ability to both track and stimulate the flow of the cerebrospinal fluid. In this way, the researchers hope to be able to treat sleeping disorders as they happen.

The cap would receive signals through a variety of sensors including an electroencephalogram, which measures the brain’s electrical activity, rheoencephalography that measures blood flow, as well as orbital sonography, and transcranial doppler. The flow of the fluid would be affected by transcranial brain and nerve electrical simulations and low-intensity focused ultrasound pulses.

The eventual device would be able to take in multiple streams of data and analyze it through machine-learning AI software.

While improper waste management in the brain may have a range of consequences — one area where it may play a significant role is in neurodegenerative illnesses like Alzheimer’s disease. Some of these illnesses are characterized by the accumulation of proteins in the brain, ultimately clogging up and killing parts of the brain’s neuronal network.

One other big advantage of the sleeping cap is its potential practicality. Currently, the best way to observe fluid flow in the brain is through magnetic resonance imaging (MRI). As Paul Cherukuri, the executive director of Rice University’s Institute of Biosciences and Bioengineering (IBB), which is involved in the research, explained: ”Since an MRI can’t be easily transported, the Department of Defense asked if we can design a small, portable cap that can measure and modulate the brain health of warfighters during sleep to enhance their performance.” He added that “What makes this exciting is that nobody’s ever attempted to build anything quite like this before.”

In addition to IBB, the research is being carried out by Rice University’s engineers from the NeuroEngineering Initiative as well as physicians at Houston Methodist Hospital and Baylor College of Medicine. The engineers would develop the technology while the medical personnel would test it on volunteers and patients. Backed by U.S. Army Military Operational Medicine Research Program (MOMRP), the scientists will likely receive a multi-year grant for this work.

Baylor College professor Fidaa Shaib, who will execute the sleep evaluation tests as part of the study, explained the potential of their work:

“While humans spend almost one-third of their lives sleeping, a unifying theory about the role of sleep and its impact on human survival and function has not been identified yet,” said Shaib. “Technologies that facilitate clearing wastes and preventing their deposition in the brain are relevant to patients with sleep disorders, especially those at risk for such neurodegenerative diseases as Alzheimer’s.”

While the Army’s particular interest lies in how sleep deprivation impacts soldiers, the implications of the study could bring a wider benefit to civilians who suffer from sleep disorders. According to studies, up to 30 percent of adults suffer from chronic insomnia, while among older adults this percentage goes up to 48. Women, in particular, exhibit a lifetime risk of having insomnia that is 40 percent greater than men’s. While the CDC recommends adults get 7 hours of sleep, it also finds that around 35 percent of all adult Americans do not get that much rest. Among children under the age of 5, about 25percent suffer from sleep issues, according to one study.

Interestingly, CDC statistics pointed out that there were also differences in how different groups within the population suffered from sleep problems. It was less common for people over 65 to sleep less than 7 hours. The people who most often chronically slept less than 7 hours a night were Native Hawaiians/Pacific Islanders (46.3 percent of respondents), non-Hispanic black people (45.8 percent), multiracial non-Hispanics (44.3 percent), and American Indians/Alaska Natives (40.4 percent). This is compared with the sleep deprivation patterns of non-Hispanic whites (33.4 percent of those surveyed), Hispanics (34.5 percent), and Asians (37.5 percent).

Numerous studies have shown that chronic sleep deprivation is more prevalent among racial minorities and people of lower socioeconomic status. The causes of this are complex but usually related to low income, disparities in education, having to work more hours to earn the same amount of money as a more advantaged group as well as “environmental conditions that compromise sleep quality” per a 2014 study.

The lack of sleep also correlates to higher rates of many serious illnesses among these groups such as obesity, diabetes, hypertension, coronary heart disease, stroke, and increased mortality.

Specific disorders aside, if you just go by how many of us feel during the day, almost 50percent of Americans in a 2020 survey from the National Sleep Foundation reported they feel sleepy from three to seven days a week. And that sleepiness comes with societal side effects. 52 percent of the people surveyed reported being irritable while sleepy, while 40 percent had headaches.

Suffice it to say, the stats bear out the reality that sleep issues are a prevalent problem for a high number of people.  If research into the sleeping cap may lead to an improvement of sleep among soldiers, the general population would also benefit from new treatments and technologies.