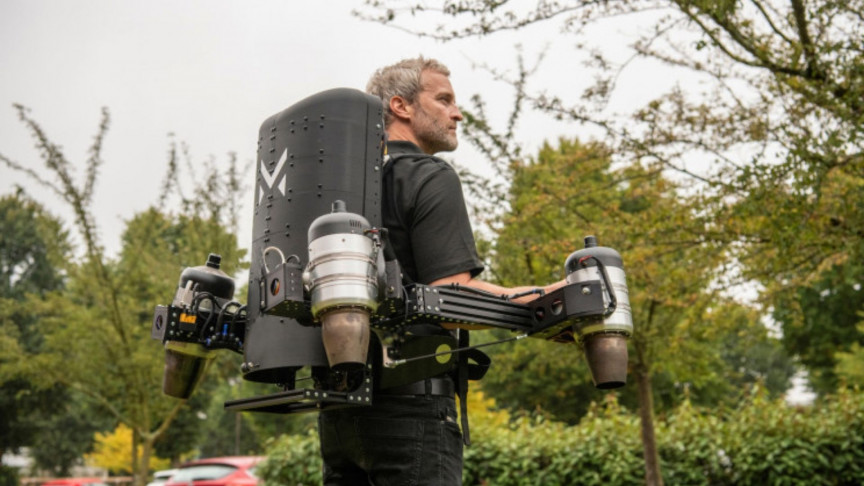 The new field of jetpack technologies is one that is typically associated with excitement and risk-taking more than safety — as sadly highlighted by a training accident last year, resulting in the death of stuntman Vincent Reffet.

A team of engineers from the UK has set out to change this perception with a new jetpack that they claim is safe enough for practically anyone to strap on and immediately take flight.

UK-based startup Maverick Aviation’s jetpack was designed to help engineers quickly and safely get to hard-to-reach locations in construction sites, though it also has several other potential applications, including for “rescue, defense and security, and entertainment,” Antony Quinn, CEO, and co-founder of Maverick Aviation, told us in an interview over email.

Above all, Quinn and his team developed the Maverick Aviation jetpack with safety in mind. The machine uses an autopilot system to allow users to navigate with safe precision. If fuel is low, for example, “the jetpack will automatically but gently land,” Quinn explains. “Fuel flow is [also] carefully controlled to each engine independently and we have developed a way of ensuring the most efficient use of fuel,” he says.

The jetpack will be easy to strap on and fly, though some training will be necessary for professionals who aim to use it on a regular basis. “Anyone will be able to hover and fly around as soon as they put the pack on,” Quinn explains. “However, there will be training to ensure the operator can safely use all the different flight modes and knows how to take control from the computer to deal with an emergency situation.” According to Quinn, that training can be completed in only a few days, and the company also provides a virtual reality practice program as a quick refresher for users of its jetpack.

Designed with professionals, not thrill-seekers in mind

The Maverick Aviation jetpack, which can travel at speeds up to 30 mph (48 km/h), can be configured in a number of different ways to make it better suited for different applications. For example, if it’s needed for transporting heavy goods, it can be adapted to help the user carry payloads of up to 30 Kg, Quinn tells us. The machine can also be adapted to have a longer range, and for better ease of wearing, and it can run on sustainable biofuels as well as normal diesel. “We have designed this so it’s easy for anyone to use and we expect that professionals in all sorts of jobs will find a use for it once they try it,” he says.

An easy-to-use machine that anyone can strap on would deliver on the heady promise of jetpacks as a technology that allows anyone to soar around with unrestrained freedom. Of course, the reality might not be quite as exciting. The so-called “jetpack man” in Los Angeles, for example, who was spotted several times at altitudes of up to 5,000 feet (1,524 m) above LAX, was the target of a manhunt by the FBI. Other companies have also been known to overstate their ambitions, such as Australian firm CopterPack, which edited footage of its personal flight suit to remove a tether. Still, excitement isn’t necessarily the name of the game for Maverick Aviation, who wish to set jetpack technology free in a different way altogether — namely, in order for professionals worldwide to safely fly with only minimal training.