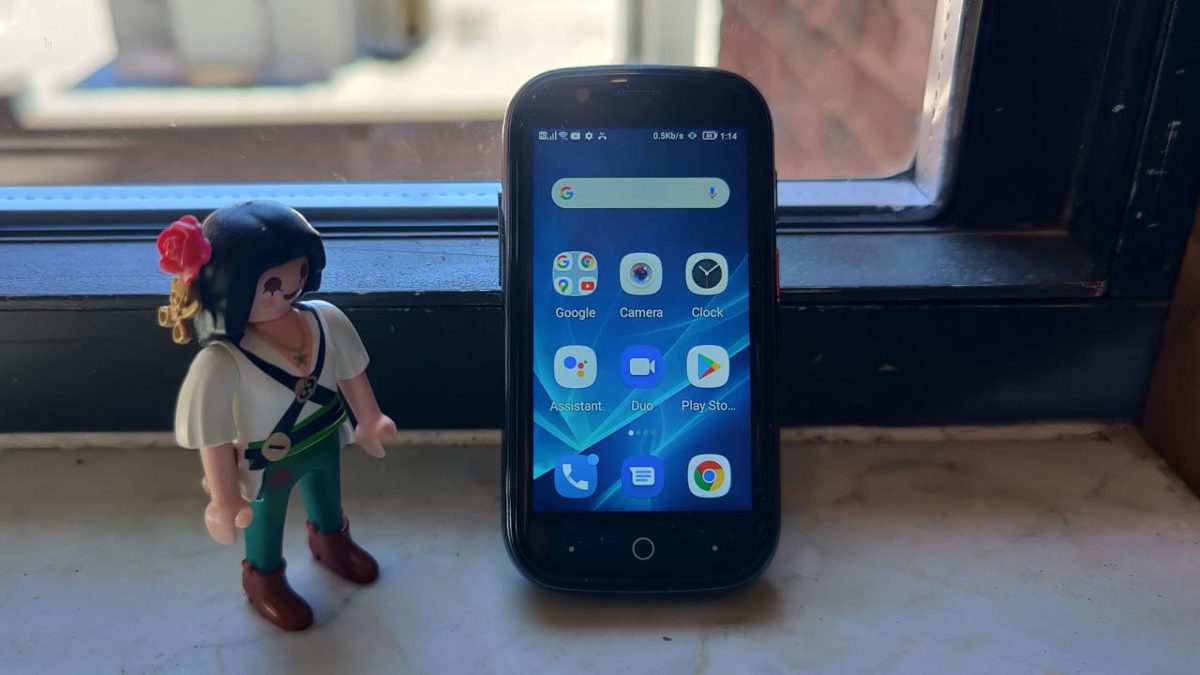 America may not be ready for the Jelly 2. This tiny, affordable smartphone helps fight screen addiction by giving you a fully capable device that is just too small to suck you in. It’s a phone for people who want to travel outside and enjoy nature, other people, and the world at large. Unihertz, the phone’s maker, has built several tiny phones, including the Jelly Pro and the Atom. We’re not yet giving the Jelly 2 a rating, because we’re using an early model with pre-release software. But our first look reveals a promising niche product for anyone who needs a phone but doesn’t want to put it front and center in their life.

One note: the Jelly 2 is coming out on Kickstarter for $199 on July 21, but Unihertz is offering a ‘super early bird’ signup for $129. That’s a pretty great deal for the capabilities you’re getting here. I don’t usually review Kickstarter products (note to Kickstarter developers: do not pitch me) but Unihertz just uses it as a sales platform for devices they already have in production.

The Jelly 2 I received to test is a smooth, blue plastic lozenge of a phone that fits very securely in my hand. It isn’t too slippery, although the back easily picks up fingerprints. The body is quite rounded. This is the smallest quality smartphone on the market—at 3.74 by 1.94 by .65 inches (HWD), it’s even smaller (albeit thicker) than the Palm phone. Weighing in at 3.8 ounces, it’s heavier than that tiny device, but the difference in performance here makes the added weight worth it.

Warning: This Jelly is not peanut butter proof

The front of the phone has an 854-by-480 3-inch LCD, which is quite bright and has accurate touch response. It has three touch buttons below it.

On the side, there’s a volume button and a programmable quick action button. It comes set to trigger the flashlight, but you can change it to the camera, music app, or pedometer, for instance. A standard headphone jack is on top, and there’s a fingerprint sensor and a 16MP camera on the back. The phone isn’t waterproof.

The touch keyboard is supremely small. When you look at it, it seems impossibly small. It isn’t so bad; I found that typing on it I was generally pretty accurate. That said, you don’t want to write out long manifestos here, like my daughter’s texts to her friends. Keep it down to a few words and you should be alright.

The keyboard is pretty tiny

The Jelly 2 runs Android 10 on a 2GHz Mediatek Helio P60 chipset with 6GB of RAM and 128GB of storage. One of the things about tiny phones is that they don’t need a lot of power to work well, because they aren’t driving super-high-res screens. I loaded many different apps on the phone and was happy to see they were all compatible, although some weren’t very usable because of too-small touch targets.

The Jelly 2 got 8090 on the PCMark Work benchmark, 286/1065 on Geekbench, and 200 on Basemark Web. That put it way above its competitor the Palm Phone on application performance, more in the range of the Samsung Galaxy S9 series—pretty impressive for a tiny phone. On the GFXBench Car Chase graphics benchmark, I got 27fps onscreen, as good as a current high-end smartphone in its maximum resolution mode. Of course, that’s because the Jelly 2’s screen is a fraction of the resolution comparatively.

Google Maps on the Jelly 2

You don’t want to play games on here. I mean, you can, sure—they play fine. But anything that assumes touch targets is going to be very difficult to operate. Driving games, with tilt controls, probably work the best.

Unihertz puts a low-key skin over Android designed to make using a tiny phone easier. There’s no app drawer by default. The company adds a few apps, including an emergency SOS app, a Student Mode app (I’m not really sure what that is), and a Toolbox with surprisingly useful utilities like a decibel meter, a heart rate monitor, a pedometer, and a compass. There are fun numeric battery and network speed indicators in the status bar; I like knowing that sort of stuff.

There’s a small fingerprint sensor on the back

Some of the software is still rough around the edges. The fingerprint sensor on the back rejected too many touches for my taste. There’s an IR remote control app that works with the built-in IR blaster, but it doesn’t have some popular American brands and part of the UI is in Chinese. I heard some skips in music playback, possibly caused by Wi-Fi hiccups. Unihertz told me that that it has software updates in the mix to fix all of these things, and none of them are showstoppers.

Call quality is surprisingly good given that the phone is so tiny. The Jelly 2 supports voice-over-LTE (VoLTE) calling on AT&T, T-Mobile, and Verizon. I tested it on Verizon, and found it supports Wi-Fi calling on that carrier as well. Call quality through the earpiece was loud and clear in testing. The speakerphone is quite tinny and harsh, but the phone supports wired and Bluetooth headsets.

The slowish modem translated to speeds around 33Mbps down in a 4G Verizon location where a OnePlus 8 was getting 100Mbps. Then again, why do you need 100Mbps on a tiny phone? Sure, maybe for hotspot mode (and it does have a hotspot mode), but considering the size and price I think this performance is fine.

The Jelly 2 has dual-band Wi-Fi as well. At 5GHz it did just as well as the OnePlus 8, getting the full 100Mbps of a 100Mbps connection through 30 feet and a wall. At 2.4GHz, performance wasn’t as good; I got about 18Mbps down where the OnePlus was getting 65Mbps down, presumably thanks to that phone’s much larger antennas.

But again, this phone isn’t about getting the ultimate RF reception. Good enough is good enough.

The cameras aren’t great. In outdoor shots, there’s not a ton of shadow detail, although photos are fine overall.

Outdoor photos are fine, but they could be brighter

The main issue is in low light, where these cameras don’t have any of the AI brightening capabilities you see in higher-end smartphones. The result is very muddy, soft photos. However, remember that this phone is $199. For a $199 phone, that’s pretty much to be expected.

The Unihertz Jelly 2 is a tiny phone for putting in your pocket while enjoying our big world. At $199 (or even $129!), it works both as a secondary handset to take out when you don’t want to get sucked into your big screen, and as a low-cost primary phone so you can stay connected, but not distracted.

There’s not much in the way of competition at the moment. The Jelly 2 is more flexible, less expensive, and has better battery life than its main competitor, the Palm phone. If you’re looking for something small but more mainstream, the next step up is Apple’s $399 iPhone SE, which is both bigger and more expensive. So while the Jelly 2 is undoubtedly a niche product, it fills its niche well. I hope we’ll be able to get outside and enjoy it soon.