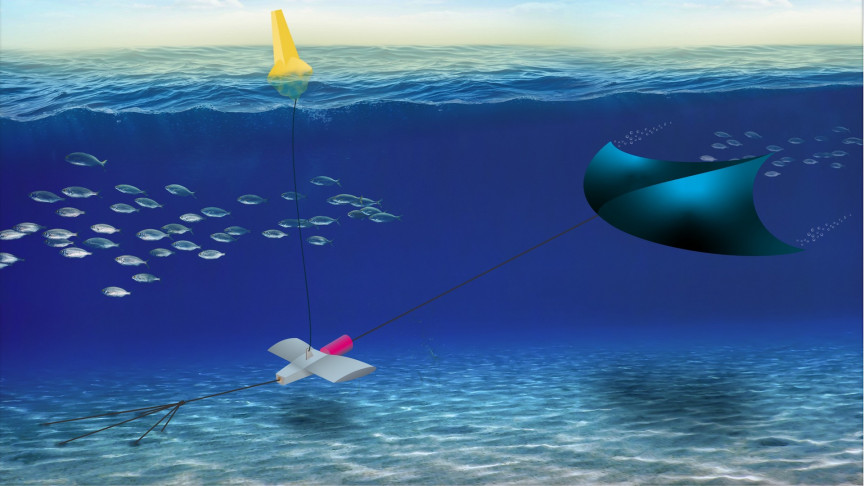 Scientists at the California-based SRI International research institute and UC Berkeley developed an underwater kite concept that harnesses the power of tides and currents to generate renewable energy, a report by IEE Spectrum explains.

The underwater kite system uses a polymer-composite-coated foam kite, shaped somewhat like a manta ray. The kite is anchored to the ocean floor, or river bed, via a tether reel equipped with an electric motor and a generator.

Essentially, the kite is angled to catch as much of the current as possible and is then released downstream, or out to sea. The tether subsequently spins the generator as it reels out. Once the tether is fully unreeled, the water kite is angled into a more streamlined position so that it can be reeled back to its starting point.

Though the device does expend energy when it’s reeling the kite back in, the amount is much less than the energy generated when the kite is released, the SRI researchers say. The team is reportedly aiming to provide an average output of 20 kilowatts per kite.

Manta system to help in the fight against climate change

The SRI researchers say the Manta kite is cheaper to install and operate than typical underwater turbines.

Though tidal turbines hold great potential for harnessing the energy of the ocean, the technology utilizes large permanent structures that are costly and sometimes damaging to natural environments. The Manta system, on the other hand, is relatively unobtrusive and can easily be reeled in when needed.

“[The Manta] system is one that will represent the promise of generating a significant amount of clean and renewable power both for remote underserved communities and to help the world in the fight against climate change,” SRI International said in a post on Medium.

The system was built thanks, in part, to a $4.2 million grant recently awarded to SRI by the US Department of Energy’s Advanced Research Projects Agency-Energy (ARPA-E) with a view to developing renewable technologies over the course of three years.

The team at SRI is still in the planning stage and has not yet revealed any information regarding a functioning prototype for the Manta system. Stay posted for future updates.