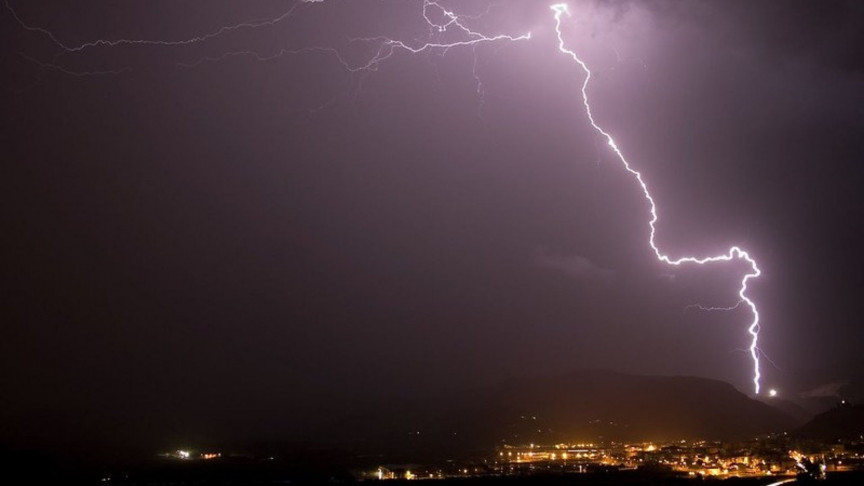 Thunderstorms are one of the most fascinating meteorological events. They are characterized by their electrical activity in the form of lightning and thunder —caused by the rapid expansion of the air surrounding the path of a lightning bolt.

But there is more taking place during a thunderstorm than what you can actually see and hear. In 2013, scientists from the University of Bergen, Norway, detected the presence of another kind of lightning during a thunderstorm, one that is not visible to the naked eye and does not produce any sound.

The phenomenon was not really new. Back in 1991 when it was first detected, it had been named ‘dark lightning’, but at the time, scientists believed they were dealing with gamma rays coming from space.

More recent research has confirmed that dark lightning is a natural phenomenon that is an intrinsic part of the discharge of lightning during thunderstorms —and is totally terrestrial.

What is dark lightning?

Dark lightning is a burst of gamma rays that is produced by the collision of extremely fast moving electrons and air molecules that takes place during thunderstorms. Researchers also refer to it as a terrestrial gamma ray flash.

The burst occurs right before ordinary lightning and it’s believed to be part of the same process of ‘discharge’ of lightning and is thought to be the most energetic radiation produced naturally on Earth.

In 2013, researchers at the University of Bergen in Norway used data from satellites equipped with gamma ray detectors to identify gamma ray flashes that preceded bursts of visible lightning.

This discovery was made fortuitously when two satellites happened to be passing right above the same thunderstorm just as the pulse occurred. The team combined satellite and radio-wave data to reconstruct the ethereal electrical event, which lasts just 300 milliseconds. They concluded that the flash of dark lightning was triggered by the strong electric field that develops just before the visible lightning strikes.

Because more information was needed to verify this hypotheses, lightning researchers are now trying to gather data from the Atmosphere-Space Interactions Monitor (ASIM), a European Space Agency (ESA) observatory located on the International Space Station (ISS).

ASIM utilizes cameras and X-ray and gamma-ray detectors that can be used to study upper-atmospheric lightning and terrestrial gamma-ray flashes (TGF), aka dark lightning.

How was dark lightning discovered?

What we know now about dark lightning is a result of a coincidence.

Seven years later, space researcher Nikolai Østgaard and his team from the University of Bergen developed a new search algorithm to reprocess the data in the second satellite. This is how they discovered a great number of gamma-ray flashes occurring just before the visible lightning bolt —more than what was originally reported.

Additionally, they found that at the time of the event, there was a discharge of radio waves recorded by a radio receiver at Duke University in Dunham, North Carolina, about 1864 miles (3,000 km) apart from the storm.

The team thinks this is all interconnected as part of the same electrical event and reconstructed it as it follows:

Where does lightning come from?

Generally, lightning occurs when powerful updrafts in cumulonimbus clouds (thunder clouds) force water droplets and ice crystals to rub against each other. This creates a build-up of positively and negatively-charged particles. The updrafts also cause the particles to separate—the top of the cloud becomes positively charged while the base of the cloud becomes negatively charged.

Once the negative charge at the bottom of the cloud becomes large enough, it rushes toward the Earth. At the same time, positive charges at the ground are attracted to this and flow upward. When the two opposing charges meet, a strong electric current, called the return stroke, carries positive charge up into the cloud. This is what we see as the bright flash of a lightning bolt.

Although many believe lightning moves from the cloud down, or the ground up, in reality, lightning can move both ways. The positive charge on the ground level attracts the negative charge from above, causing the current to flow towards the ground. At the same time, the positive ground charge is attracted upward in the form of a ground-up strike.

Negatively and positively charged clouds can do exactly the same thing in the air, so instead of the bolt of lightning appearing to move towards the ground (or up from the ground), you would see the lightning passing from one cloud to another.

The electric field produced in the clouds can accelerate electrons to nearly the speed of light. Electrons can collide against air molecules and generate deceleration radiation, which creates positrons, positively charged subatomic particles with the same mass and magnitude of charge as the electron, essentially antimatter particles. When electrons and positrons meet each other up there, they mutually annihilate each other, emitting gamma rays.

This is how the basic process for lightning discharge can generate dark lightning.

Is dark lightning harmful to humans?

Gamma radiation is actually one of the most destructive types of radiation. It is ionizing, which means it can extract electrons from atoms.  When it penetrates the cells, it breaks the bonds in DNA molecules, causing genetic damage which can induce cancer.

A flash of typical lightning hits more or less in one place, but flashes of gamma radiation spread very quickly in all directions. As concerning as this may sound, the reality is that gamma rays from dark lightning tend to dissipate before becoming dangerous to living beings down on Earth.

According to lightning expert John Dwyer ,from the Florida Institute of Technology, only people traveling on a plane during a thunderstorm are likely to receive a significant dose of ionizing radiation from dark lightning. However, this is mitigated because a) pilots tend to evade thunderstorms; b) dark lightning is not always there —it’s actually believed to only occur once for every thousand visible lightning bolts; and c) even if someone happened to be hit by a significant amount of gamma rays, they wouldn’t feel a thing.

Thus, the only way to know if the passengers are exposed to dark lightning and gamma rays is by flying with radiation detectors on board. In order to do further research on dark lightning, though, it’s better to place gamma-ray detectors on satellites, as they’ve proved to be useful in the past.

These days, some of the most powerful tools to progress in the research of dark lightning are ESA’s Atmosphere-Space Interactions Monitor, located on the International Space Station, and NASA’s Fermi Gamma-ray Space Telescope.

The latter was launched in 2008 to study gamma-ray bursts and transients, not specifically for dark lightning study, but primarily for the study of dark matter, micro black holes, and supernova remnants.

All of these phenomena are linked to gamma radiation.

In fact, before the discovery of dark lightning, scientists used to think that gamma radiation came from space. What the phenomenon of dark lightning showed them (and us) is that gamma radiation is not only generated by the death of the stars and nuclear explosions, but also by mundane events like thunderstorms taking place literally over our heads.