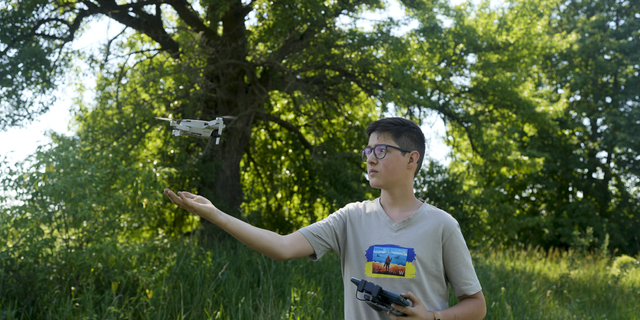 An individual’s location is typically known to someone or thing at any given time whether using a smartphone or device – such as a drone. This issue has become one of tremendous strategic importance for Ukrainians in their battle against Russian aggression.

Allegations have arisen that Da-Jiang Innovations (DJI), a Chinese company that is the world’s largest civilian drone manufacturer, has been providing the Russian military with software to track Ukrainians piloting DJI drones used to conduct operations.

The matter raises grave new concerns about the behavior of another Beijing technology behemoth and its impact on Ukrainian self-defense efforts.

Andriy Pokrasa, 15, lands his drone on his hand during an interview with The Associated Press in Kyiv, Ukraine, on Saturday, June 11.
(AP/Natacha Pisarenko)

AeroScope is DJI’s comprehensive drone detection platform that gathers real-time flight data of DJI drones. Fedorov asked Wang to block all DJI products in Ukraine that were not purchased and activated there. German electronics giant MediaMarkt later accused DJI of providing real-time information about the location of Ukrainian pilots to the Russian military. DJI called the allegations “utterly false.”

DJI temporarily halted sales to both Russia and Ukraine in April amidst the criticism and stated that it abhorred the thought of its drones being used in combat. Suspending sales to both countries was peculiar though. It signaled that DJI equates Ukrainian self-defense with Russian aggression.

Ukraine has received unanimous support from the international community, while Russia has been expelled. DJI’s actions are undercutting Ukraine’s ability to defend itself and give the accusations against it more weight.

Those accusations have continued. A Ukrainian drone pilot advised during a May 13th interview that the Chinese are providing the Russians software that can pinpoint their location upon takeoff and touchdown.

The same pilot recounted coming under rocket attack within seconds of landing a drone. He added that the Russians “can see everything” and that Ukrainian pilots are being killed.

A Ukrainian serviceman looks at a self-propelled howitzer on a road in the Kharkiv region on May 17.
(Sergey Bobok/AFP via Getty Images)

An American reporter for the independent UK Defence Journal also posted screenshots via Twitter of a Telegram channel where Russians are crowdfunding DJI quadcopter drones for their forces in Ukraine as recently as May 15th.

If true, DJI has not halted all sales to Russia despite its statements to the contrary.

As a former senior staffer in the U.S. Senate, I studied the privacy practices of global Chinese telecommunications and technology companies such as Huawei, Bytedance and others. They are data vacuums strongly suspected of sharing information with Beijing.

Chinese President Xi Jinping requires that every company maintain communist party officials in their ranks so that they will “firmly listen to the party and follow the party”. In the case of DJI, Beijing is also a direct investor.

The U.S. added DJI to a Treasury blacklist last December and the Senate should pass S.B. 3563, which would place DJI on the Federal Communications Commission’s Covered List to ensure taxpayer money cannot be used to purchase DJI equipment.

Every member of NATO should also ban DJI products, which would limit China’s ability to spy and economically cripple the company.

NATO Secretary General Jens Stoltenberg addresses the media during a joint statement with German Chancellor Olaf Scholz prior to a meeting at the Chancellery in Berlin, Germany, Thursday, March 17, 2022.
((AP Photo/Michael Sohn, Pool))

It’s no surprise that DJI is accused of providing the location data of Ukrainian drone pilots to the Russian military given the close relationship between Beijing and Moscow. DJI’s insistence on treating both countries as equally culpable is absurd.

The U.S. and other NATO members should respond by blacklisting all DJI products.

Chuck Flint is an attorney and former U.S. Senate chief of staff.