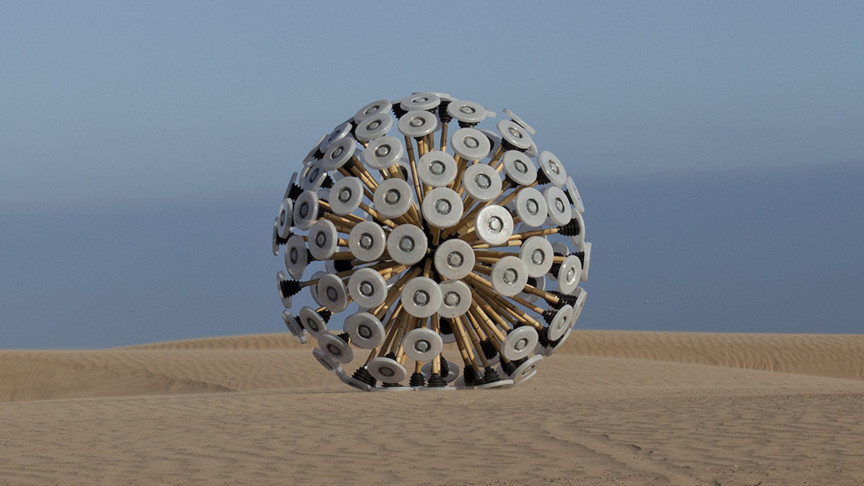 The Mine Kafon, designed by Afghan designer Massoud Hassani, is a great example of an expertly-designed device utilizing cheap materials to achieve incredible results.

The wind-powered device, which looks somewhat like a Hoberman sphere, is “approximately the height and weight of the average man, allowing it to trigger landmines as it rolls across them,” a description on the Mine Kafon website explains.

By making the device, Massoud Hassani set out with the lofty goal to eradicate landmines from Afghanistan, using a device that costs as little as $40.

At the spherical device’s core is a 37 lb (17 kg) iron casing. Dozens of low-cost bamboo legs capped with specially designed compliant plastic “feet” give the Mine Kafon a larger surface area for rolling.

Though the ball does sustain damage when it triggers a landmine, it has enough legs to allow it to roll over approximately four landmines before parts need to be replaced.

Overall, the device weighs 70 kg (154 lb), meaning it is light enough to be propelled by a normal breeze, while being heavy enough to trigger landmines it rolls over.

The ball is also equipped with a GPS unit — placed high enough to avoid damage from most mines — that maps the route the Mine Kafon has taken, allowing users to map areas that have been swept by the device.

Landmine removal by trained landmine-clearing experts can be prohibitively expensive, with costs ranging between $300 and $1000 for the removal of one landmine. It is also, of course, incredibly risky for the professionals involved.

However, as a Landmine Monitor report shows, in 2019, at least 5,554 casualties of mines were recorded and there are thought to be 110 million active landmines worldwide, highlighting the need for efficient removal programs.

The Mine Kafon Ball isn’t Hassani’s only initiative: a 2020 project funded by the European Commission developed technology for drones (UAVs) to take down mines from the air.

In an interview with CNN, Hassani claimed that the idea for the Mine Kafon Ball was inspired by toys he used to play with as a child. “One of them was a little rolling object that was carried by the wind. We would race them against each other in the local fields,” he explained.

“Sometimes, due to the presence of landmines, they would roll off into places that we weren’t permitted to go.”

Using Hassani’s technology, members of similar communities in the future may escape the need to avoid entire fields and landscapes to avoid risking their lives.