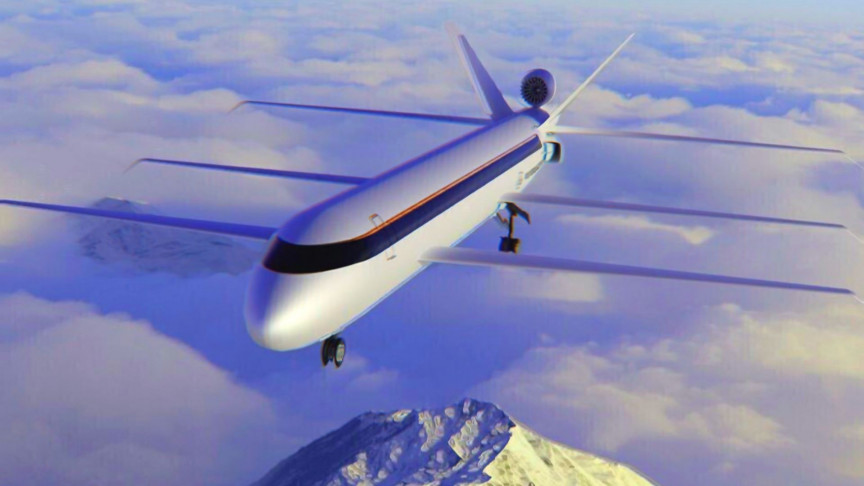 Commercial airliners aren’t widely known for cutting-edge technology. Wide-body planes have remained mostly the same for several decades, but a new design is making waves in the industrywide drive to reduce carbon emissions, and it could change the way we think about planes for keeps.

A baffling new jumbo jet concept was recently unveiled by SE Aeronautics, taking an uncommon approach to every aspect of wide-body aircraft design and performance, including something rarely seen: a third wing, a double tail fin, and two rear engines.

A tri-wing airplane prototype will be a ‘single-piece,’ composite fuselage

Called the SE200 prototype, the new design can carry 264 passengers, and will consume 70% less fuel than other jets of similar size. It can travel roughly 10,500 miles (16,900 km), and features a top speed of 690.5 mph (Mach 0.90), which is greater than other jets of the same class. The extra wing provides more lift, which shortens the SE200 takeoff and landing range, in turn multiplying the number of small airports it can work with.

Additionally, the SE200 won’t store fuel in the wings, which allowed designers to focus on a thinner, more aerodynamic design. For SE Aeronautics wide-body prototype, the fuel is stored on a bladder atop the fuselage. Notably, the prototype has an integrated monocoque structure, and the structure of the aircraft fundamentally breaks with convention: aircraft manufacturers typically bolt together large sections called “barrels” to optimize production. “This is usually where fuselages break apart in an accident,” said SE to the Robb Report. “SE will build a single-piece, tough composite fuselage.”

Combined with the unique monocoque design, the company claims its composite materials could make the aircraft among the most efficient ever built. SE Aeronautics also says the airplane will have a 50-year service life. “We will also be able to build these aircraft in less than half the time it takes to normally build an aircraft of its size,” it added. The prototype will also have dual rear engines featuring 64,000 lbs of combined thrust, but “the jewel in the crown is [SE Aeronautic’s] ability to get that fuel consumption rate down by 70 percent,” said Tyler Mathews, CEO of the company.

“We are going to revolutionize the industry,” added Mathews.

While full of calamity, the last year has seen several business jet concepts with increasingly sustainable focus revealed to the world. For example, the Flying-V was developed to be a fuel-efficient, long-range vehicle capable of seating 314 passengers, their baggage, and fuel tanks in the wings. It looks stranger than SE200, but serves to affirm the out-of-box perspective designers are beginning to implement. Of course, either design could end up sprawled forever on the drawing board, but the SE200’s wide-body and unconventional design creates much virtual space for alternative visions — like a more compact, business jet concept. Whether the two prototypes make it into the skies or not, this is a rare but exciting time for engineers to experiment with big and industry-shifting ideas for novel commercial aeronautics solutions.