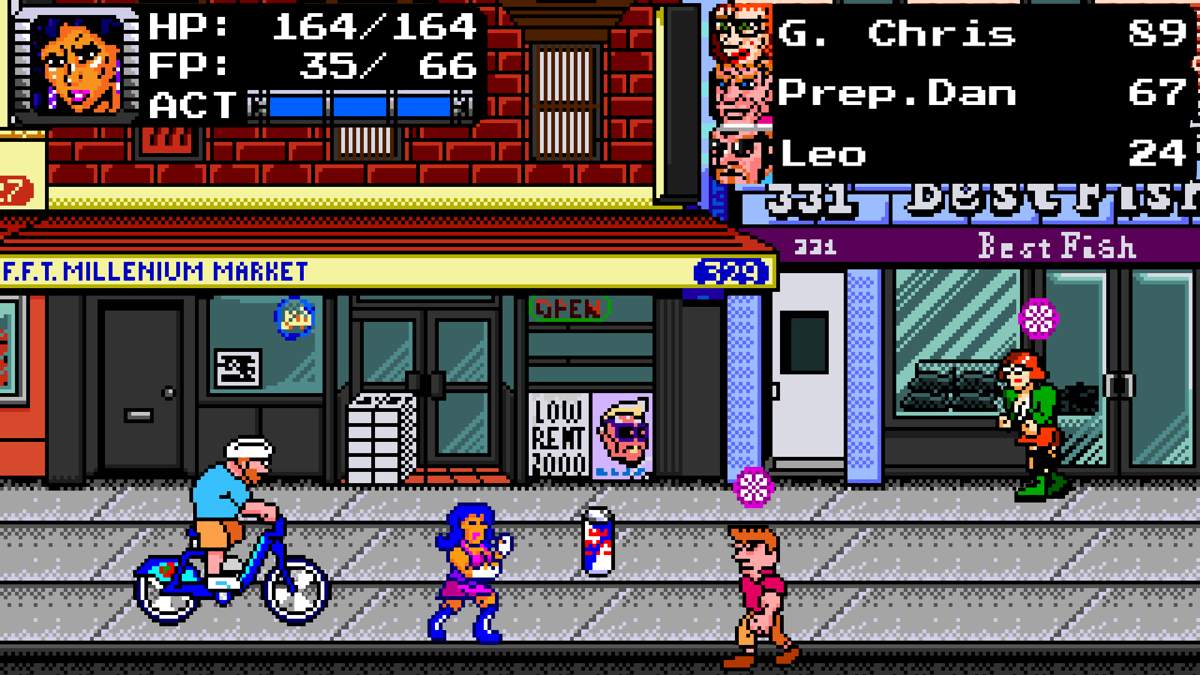 On the surface, Treachery in Beatdown City appears to be a strict homage to classic beat ‘em up games from the 1980s and 1990s. However, the brawler’s menu-driven, tactical combo system and biting urban satire reveals a PC game that’s radically different than what’s come before it. Developed by Nuchallenger, Treachery in Beatdown City is a fun indie game that requires you to use your brain to battle the way through the gentrification elements that plagues a fictional city’s streets, but its pace may prove too slow for traditional beat ’em up fans. Tactics fans, on the other hand, may dig it.

Treachery in Beatdown City, the first part of an episodic series, takes place in the fictional East Fulton. Ninja Dragon terrorists have kidnapped president Blake Orama, who is visiting the city to give a speech speaking out against ninjas kidnapping world leaders. It’s up to the game’s protagonists—Lisa Santiago, Brad Steele, and Bruce Maxwell—to rescue the president.

The game’s gritty backgrounds are heavily-inspired by a New York City from a different time. This includes graffiti covered buildings, streets filled with garbage and potholes, and of course, extremely rude and disrespectful citizens. There are some not-so-subtle allusions to real-life characters. The principle one being Mayor Mike Moneybags, who is an obvious analog to former NYC mayor Mike Bloomberg. You’ll run into aspiring rappers selling you mixtapes and upper-class yuppies who think they and their small dogs own the sidewalks. If you’re a New Yorker then you’ll appreciate the inside jokes. If you live elsewhere, then most of these references will go over your head without diminishing your enjoyment of the game.

During the heroes’ journey through the dangerous East Fulton streets, the trio battles corrupt police officers, racists, hipsters, bikers, and shady businessmen who are trying to gentrify the neighborhood. These are all endemic of NYC life, and something natives deal with daily. The protagonists are people of color who confront baddies who judge them based on their ethnicity. For example, Lisa puts the hurt onto a roided up jock who assumes she works at the local gym because she’s Latina. In addition, Bruce, who is Black, must contend with hipsters who mistake him for a basketball player. The social commentary is sharp, but never drags the overall experience. 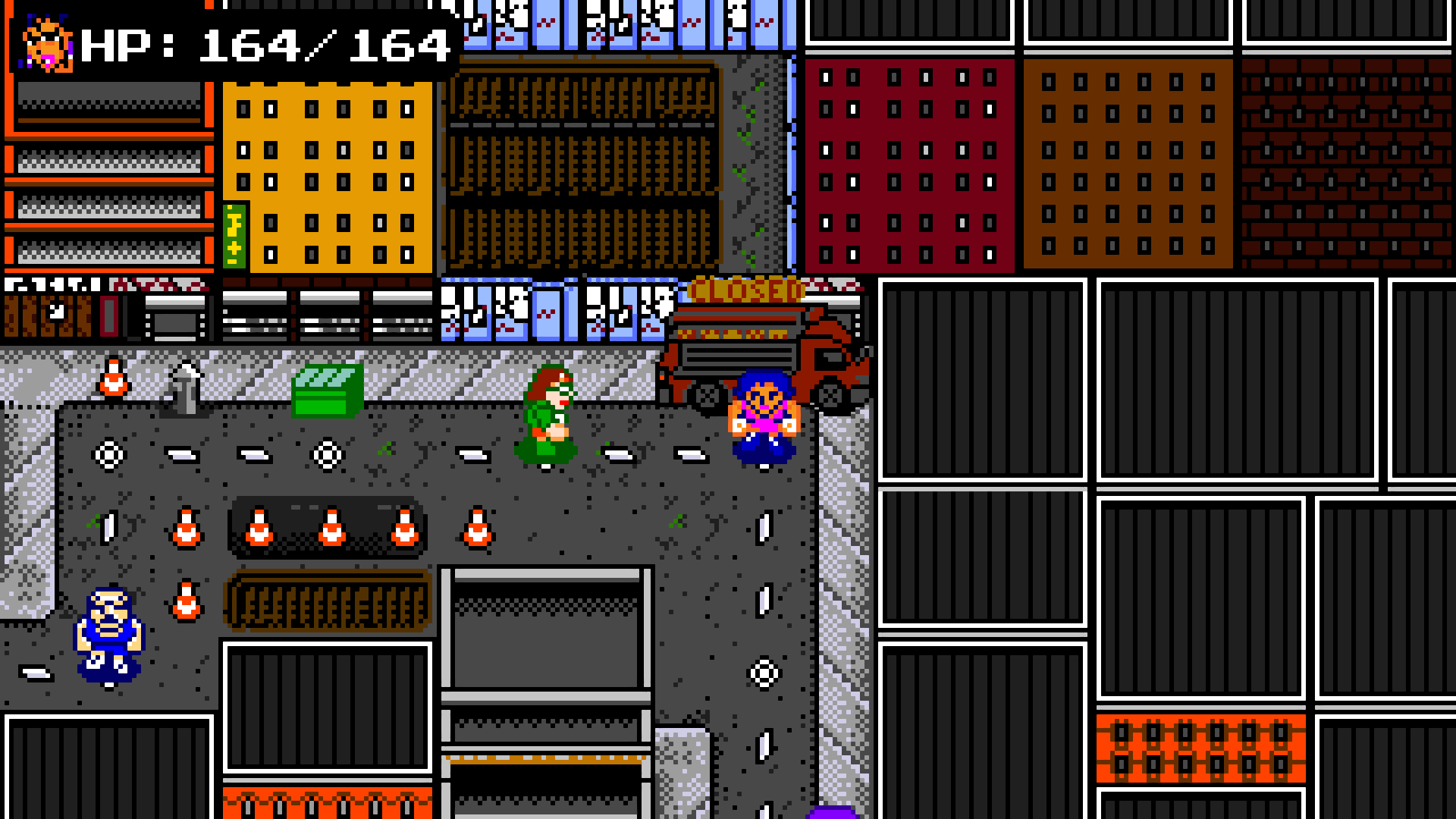 Each of the three selectable characters has a unique fighting style. Lisa is the most well-rounded of the trio, as her MMA and boxing skills give her a solid balance of grapples and strikes. Bruce uses Jeet Kune Do expertise to assail foes with a series of rapid punches and kicks. The hulking wrestler Brad is an excellent grappler. You begin the game as Lisa, but gain access to Brad and Bruce not long after the intro. You can switch between characters while in the overworld map, but can only use one during combat. Unfortunately, you cannot have an AI partner fight along side you.

Lisa is great for most battles since she is good at both striking and grappling. Brad and Bruce may find themselves at a disadvantage if they face foes of similar specialties. For example, Bruce struggles against fellow strikers, but fares better against slow-moving grapplers. It’s annoying to restart fights because you chose a character who isn’t suited for a particular brawls. Still, others may find this trial-and-error approach appealing.

Like the heroes, enemies lean toward specific fighting styles. There are strikers and grapplers, but also support types. The assist characters are especially frustrating, since they buff their allies with added defense, attack, and regenerating health. 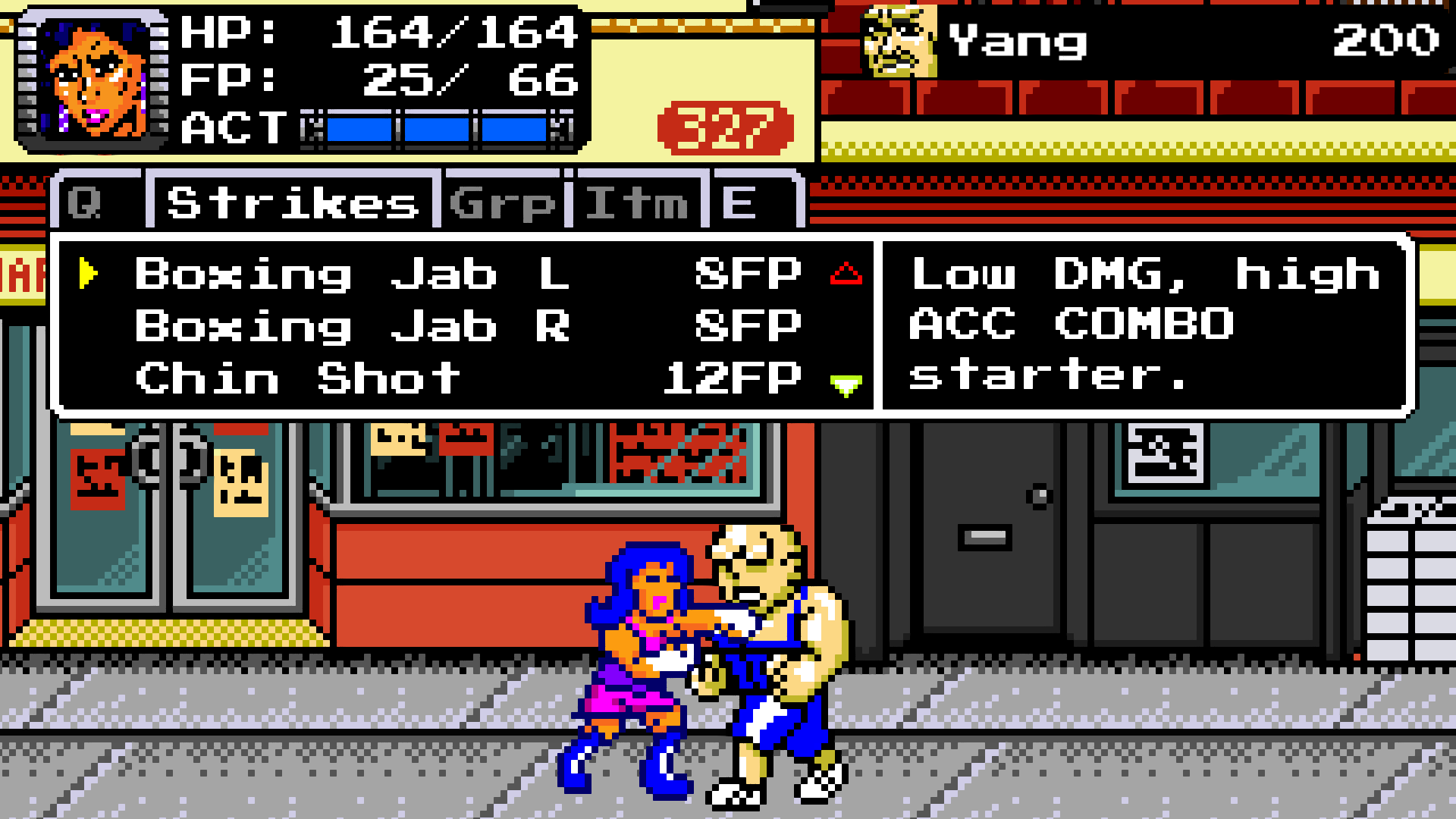 If you’re coming into Treachery in Beatdown City thinking it’s a straight-up Double Dragon or Final Fight clone, you’re in for a surprise. Instead of backgrounds that scroll as you move, fights take place on a single, static screen (that changes depending on the neighborhood you’re in). You can’t just mindlessly hit the attack button, either. You can only perform actions if you have enough Action Points (AP) and Fight Points (FP). These vital meters replenish on their own over time, but you can refill them faster by landing successful attacks or by ingesting items like chicken sandwiches and energy drinks that boost AP and FP. In this manner, Treachery is less a beat ‘em up and more of a strategy/tactics game.

Jabs are good for finishing off enemies with low HP, but they won’t win the day. To perform complex attacks, you’ll need to open the menu. This pauses the action, ala Fallout’s V.A.T.S. system. You can select strikes, combos, and grapples. The more devastating the action, the more FP it costs. If you have enough FP, you can chain up to three attacks selected from the menu. With Brad, you can have him deal a left hook, followed by a right, and finish with a bodyslam. These multi-string attacks are cool, and the most effective way to quickly dwindle an enemy’s health points. Just be aware there’s a chance attacks won’t connect, leaving you open and with lower (or no) AP or FP. There’s a great deal of strategy involved in every encounter. In addition to attacks, you can also use heal or defend (block or counter) from the menu. As the game progresses, you’ll unlock additional moves.

Character positioning is also vital. If a foe attacks you from behind, they’ll deal almost twice the damage as a frontal attack. This also works in your favor, so you must consider your position before launching an attack. If you’re slightly above or below an enemy sprite, your attack has a greater chance of missing when compared to the times when the sprites are on the same level. If two or more enemies are in close proximity of one another, your attacks can potentially hit all three. However, trying to wrangle baddies for an attack of this sort isn’t easy since they move around a lot. The aforementioned assist-type foes are something you’ll want to deal with as quickly as possible, because it’s demoralizing to bring an enemy to the brink of death only for a hipster to heal the foe.

Treachery in Beatdown City’s top-down, overworld map recalls Konami’s first Teenage Mutant Ninja Turtles NES game. Here, you’ll move your character to different points along East Fulton’s streets and alleys and find dumpsters containing restorative items. There are numerous friendly citizens, too. They tell you how to deal with certain enemy types, where you can find items on the map, or simply give you story updates. Halal food carts let you heal and save your game progress. Of course, you’ll also see plenty of bad guys on the map. When you interact with one, you’re treated to an in-game cinematic exchange before the strategic brawling begins. 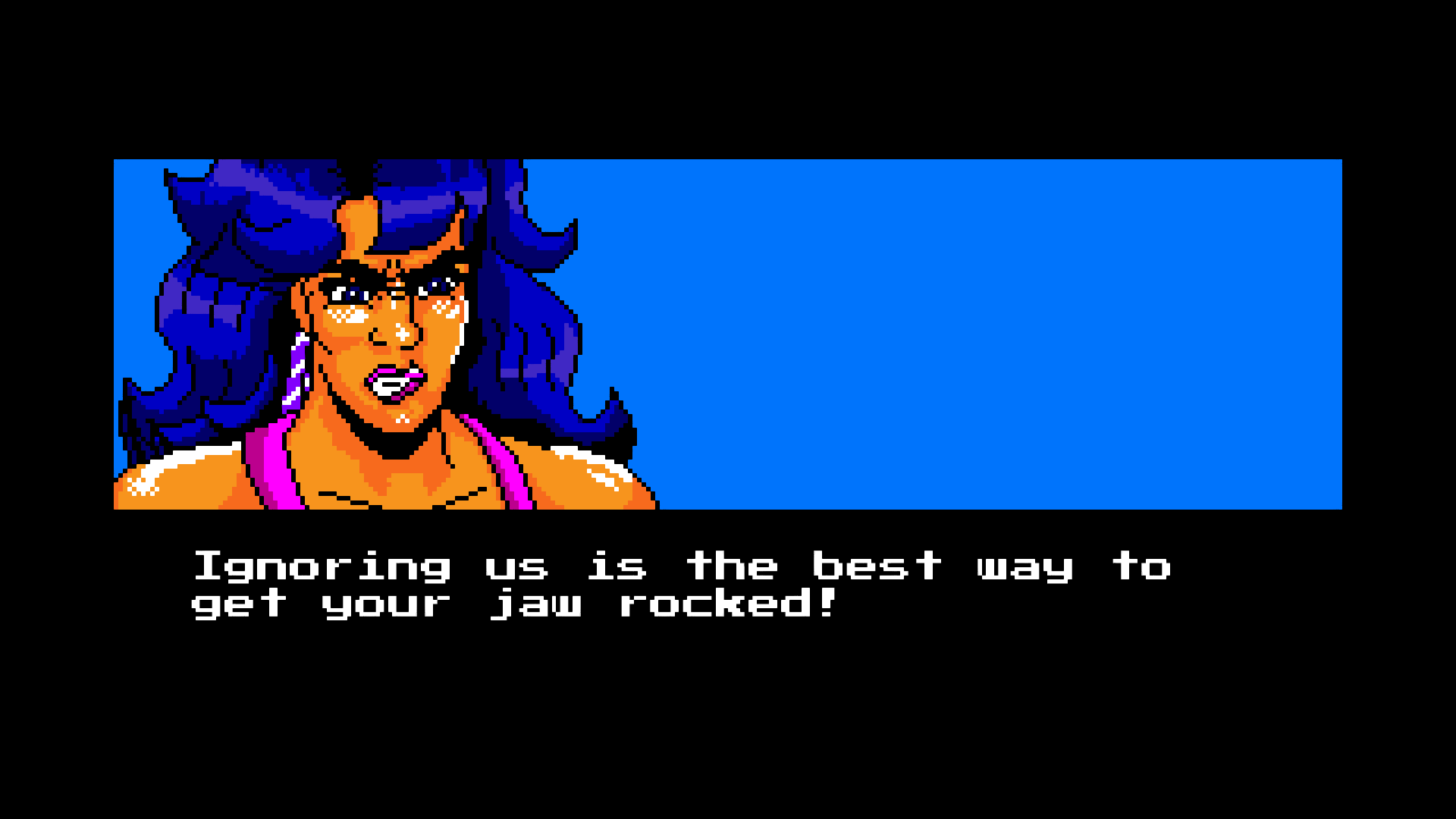 In the game’s latter half, the enemies begin to use knives, batons, and other weapons. These weapons make combat deadlier, since they deal greater damage than melee attacks. Knives, for example, deal bleed damage that forces you to stem the blood loss with a bandage. You can use weapons, too, by knocking enemies to the ground and snatching them away from foes. Weapons not only let you finish most enemies in three strikes, but they don’t consume additional AP. All you have to do is hit the jab button (with a weapon in hand) and wipe out any foe unlucky enough to be in front of you.

Grudge Matches, which occur as the story progresses, pits one of your characters against a previously faced foe (or foes). In Lisa’s case, it is a drugged-up hipster who wants to touch her hair without permission. Unlike regular Treachery in Beatdown City fights, Grudge Matches force you to use a specific character. Completing a Grudge Match unlocks new attacks for the main character involved in the battle.

The game also has boss battles. No matter which of the trio wins these matches, your entire party gains additional health and defense.

Weapons and Grudge Matches add a bit of pizzazz, ultimately they don’t prevent Treachery in Beatdown City from becoming repetitive. Once you know how to deal with each of the enemy types, the excitement wears off. Compounding things is how the main story never comes to a close since this is an episodic game.

Treachery in Beatdown City looks and sounds like a long-lost Nintendo Entertainment System title, so it won’t tax your gaming rig. To run the game on your PC, you’ll need (at a minimum) an 1.8GHz Intel Core 2 Duo CPU, 3GB of RAM, a GPU with 512MB, DirectX 9, and 354MB of storage space. I had no issue running the brawler on a gaming desktop, a PC with an Intel i7 4790 CPU and Nvidia GeForce GTX 1080 GPU. The game maintained an even 60 frames per second pace.

There isn’t much in the way of graphical options. The most you can do is change the resolution between 640p, 720p, and 1080p. There are no filter options of any kind. While this isn’t a true retro game, it would have been great if you could apply a graphics filter, such as a CRT overlay. You can also switch between fullscreen and windowed mode, too.

The game supports both mouse and keyboard inputs, as well as game controllers. It has Steam features like Steam Cloud Saves and Steam Achievements.

Treachery in Beatdown City does an admirable job of injecting originality into the beat ‘em up genre.
While it lacks the forward momentum found in games like Final Fight and Streets of Rage, the brawler more than makes up for that with its emphasis on strategy. The 8-bit graphics, music, and sound effects are simultaneously old-school and modern. If you’re looking for a fresh, quirky beat ‘em up with a healthy dose of social commentary, Treachery in Beatdown City is a game you should pick up.