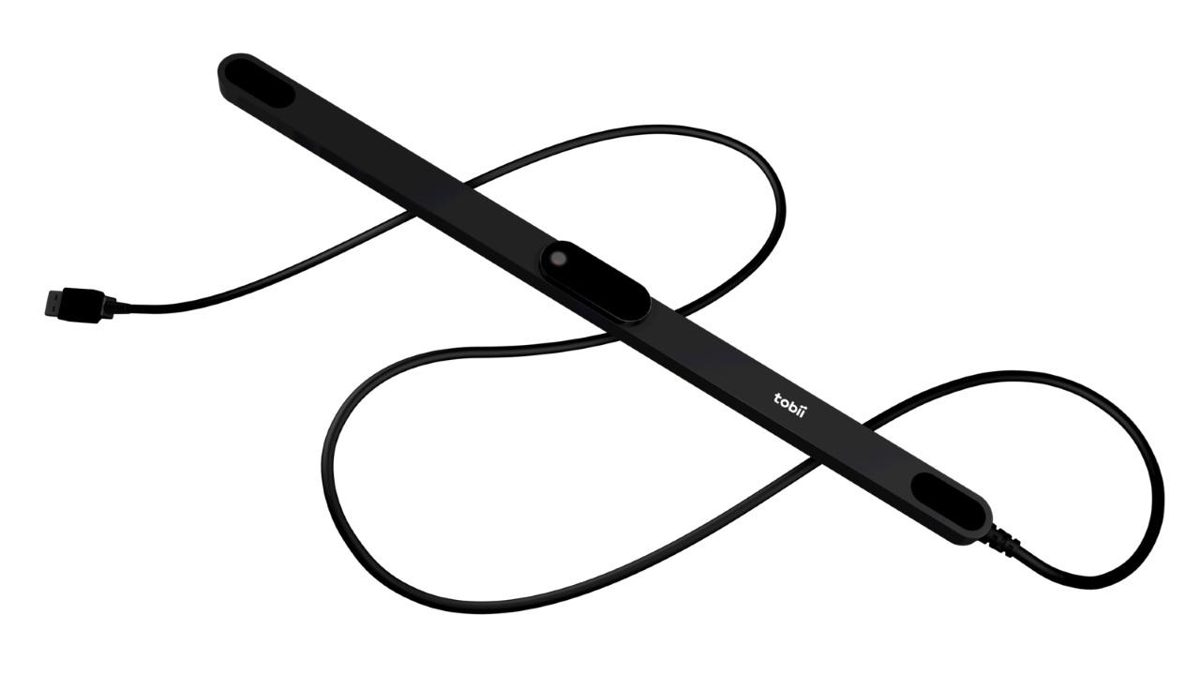 Eye tracking is a technology packed with potential for improving how we interact with our computers, and Tobii is one of the biggest names in the field. The company’s eye tracking hardware has been built into a handful of gaming laptops and is being explored for use in everything from shopping kiosks to VR headsets. Tobii also offers a standalone eye tracker for users who want to experiment with their own desktops in the form of the Eye Tracker 5. This $229 camera/sensor bar can follow your gaze anywhere on your monitor, and proves that the technology is accurate and functional. Unfortunately, it’s fairly limited, able to work with only a few hundred games and unable to provide some of its more advanced Windows features on systems with multiple monitors. This is a fascinating tech toy that shows a potential future of how we’ll work with our devices, but it isn’t quite ready for broad consumer use.

The Tobii Eye Tracker 5 is a slim black bar measuring 11.3 inches wide and 1.1 inches tall, with three glossy pads on the front. The protruding center pad contains the camera itself, while the two pads on the sides hold infrared illuminators. A short, 2-foot USB cable extends from the right side of the bar; a 3.3-foot extension cable is included if that isn’t long enough to reach your computer.

The Eye Tracker 5 is designed to be mounted just below your monitor, and features a magnetic back that works with two slim, adhesive-backed metal strips you can attach to your display’s bottom bezel. I had no problem applying a strip to the bottom edge of my monitor, and the Eye Tracker 5 snapped on securely. A wider flex mount is also included for users with curved monitors.

All eye movement is tracked by the Tobii Experience software, along with the provided Tobii Game Hub and Tobii Ghost apps. Tobii Experience handles calibration, along with Windows-level features like mouse movement and app switching. Tobii Game Hub handles individual games and their eye tracking integration. Tobii Ghost provides a Twitch extension for streamers who want to share where their gaze goes while playing games (particularly useful for MOBAs and other strategy games).

Calibration via Tobii Experience is a quick process. Sit comfortably in front of your monitor and look at the screen until circles representing your eyes appear. This indicates that the device has gotten a fix on them. After that, look at two sets of three dots in different locations on your screen, staring at them until they disappear. Once that’s done, the Eye Tracker 5 can follow your vision, and the Home tab in Tobii Experience will show a floating circle where you’re looking, so you can confirm it’s working.

If you want more than one person to use the Eye Tracker 5, you’ll need to set up a new profile and calibrate separately for each user through Tobii Experience. If you wear glasses, you might also want to set up separate profiles for yourself with and without them, though I found the eye tracking to work through my glasses without doing that.

While Tobii Experience supports multiple users, it doesn’t fare so well with multiple screens. The Eye Tracker 5 can only track your gaze for the monitor it’s mounted under, so you can’t enjoy eye tracking across multiple monitors. Using multiple monitors also disables several Windows-level features, like automatically locking your computer or dimming the screen when you aren’t in front of it, or warping the mouse pointer to where you’re looking.

The Windows-level features of the Eye Tracker 5 work well, though it’s unfortunate some of them don’t function with a multiple-monitor setup. As a Windows Hello-compatible device, the unit quickly and consistently logged me into my PC. Switching between apps with Alt+Tab also worked very well, locking into the tile of the window I wanted to switch to as I looked at it.

It’s a shame that mouse movement is limited to one screen, because I could see that the eye tracking was accurate enough to be handy. Ditto for single-screen features like automatically dimming the display or locking your computer after you look away for a while; since the device can only make sure you’re looking at the screen it’s mounted under, if you spend any amount of time looking at more than one monitor these features could kick in when you don’t want them to.

Currently, the Eye Tracker 5 supports 154 PC games, most of which are major Ubisoft releases like Hitman, Tomb Raider, and The Division 2 or indie games like Ori and the Blind Forest and Clustertruck. Eye tracking needs to be implemented specifically for each game, so you can’t simply map your gaze to act like your mouse or right analog stick; each game needs to enable the technology in a way that makes sense.

I played Shadow of the Tomb Raider using the Eye Tracker 5. The game has built-in Tobii support, so all I needed to do was open the game and access the feature in the options menu. Eye tracking in this game has a very light touch. When walking around, looking at different parts of the screen will slightly tilt the view in that direction, but not turn the camera significantly. When aiming, your aim will snap to the enemy you’re looking at. It was slightly disorienting to see my locked aim jump between targets as I looked around, but the settings let you adjust the speed of the target change. The eye tracking isn’t used to directly control the camera or your aim with precision; it just follows your attention to specific targets or slightly adjusts the view.

I then played Heavy Bullets, a rogue-like FPS. This game doesn’t have Tobii eye tracking support built in, but is compatible through the Game Hub software. I enabled eye tracking by specifying where the game’s executable was located on my computer, but my BitDefender antivirus detected this file modification as malware, so I had to disable the latter’s Advanced Threat Detection feature while using Game Hub.

The eye tracking in Heavy Bullets shifts the view as you glance at different parts of the screen or turn your head physically. As in Shadow of the Tomb Raider, it’s a very light touch, more of an enhancement to the experience than a significant tactical advantage. You still don’t aim directly with your eyes, but can move your head left and right to peek in either direction as you’re running around.

Clustertruck, another indie game in which you run across the tops of moving trucks, also supports the Eye Tracker 5 through Game Hub. The tracking again only translates to shifting your view, adjusting the camera as you look around the screen and move your head. It’s certainly accurate, but doesn’t add much to this specific game.

Eye tracking has a lot of potential to make gaming and work easier, and Tobii has proven over the years that the technology itself is solid. The Eye Tracker 5 follows your gaze accurately all over your screen. Implementation is the big stumbling block, with generally limited functionality in most supported games and the inability to apply Windows features to a multiple-monitor setup. Tobii is clearly leading the way with eye tracking, but as a peripheral and control device the Eye Tracker 5 doesn’t offer a lot of vital functionality. Serious streamers and League of Legends players may appreciate the ability to share and study where your gaze falls during matches, but for direct control over your games or your PC it falls short.

This doesn’t mean eye tracking is a dead end. Tobii has developed some impressive technology that just needs to be put to good use. If it doesn’t find a comfortable home on PCs, it could still prove invaluable for virtual and augmented reality. Even with its limitations, the device is a fascinating technological plaything that hints at a possible future of how we’ll interact with our devices.