Tidal Turbines: The Future of ‘Green” Might Be the Blue Sea 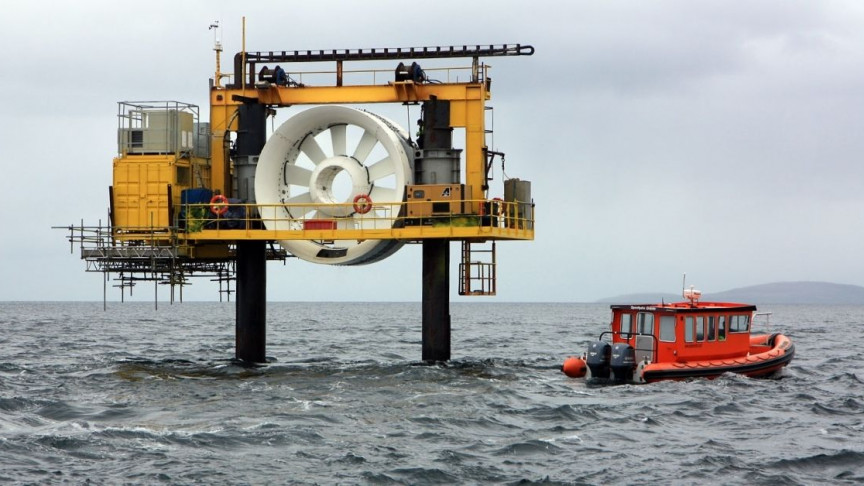 The sea and the waves are very powerful forces of nature. If only there was a way we could harness its untapped energy for our own needs.

Well, it turns out, we actually can, thanks to the amazing engineering behind tidal turbines. Intrigued? Let’s dive in.

How do tidal turbines work?

Tidal turbines are underwater, or partially underwater, electrical generators that work much like wind turbines except underwater. While in principle the same, the higher density of water, and differing pressure and temperature conditions at depth in a water column does mean that tidal turbines tend to smaller and more rugged in design.

While this might sound very cutting edge, using tidal power to do work is actually nothing new. Tidal mills, for example, were a very common practice in many parts of the world since the middle ages.

One of the main benefits of tidal turbines is the fact that their energy source, the tide, is a consistent and reliable source of kinetic energy. This makes the technology a very attractive proposition as it doesn’t require backups from more traditional power generation when the wind doesn’t blow or the sun doesn’t shine.

Tidal turbines are generally installed on the seabed at locations with high tidal current velocities, or strong continuous ocean currents, where they extract energy from the flowing water.

RELATED: MICROSOFT TEST A RENEWABLE ENERGY-POWERED DATA CENTER AT THE BOTTOM OF THE OCEAN

Water currents and tides are driven by a combination of factors, including temperature gradients and salinity variations within the water, global wind systems, and gravitational forces from the Earth’s Moon and, to a lesser extent, the Sun.

Variation of the moon’s gravitational field over the volume of the earth causes a “tidal bulge” – displacement of small amounts of water in the oceans over a very large area. The ocean bulges reflect from shorelines, setting up currents, resonant motion, and standing waves, and driving coastal tides. Coastal topography can also intensify the fluctuations in coastal water height fluctuations.

But, it is a little more complicated than that, as you can imagine. It is not only the water column that distorts in response to gravitational forces but also the Earth too (ever so slightly). In fact, this is why the Earth is actually more ellipsoid than spherical in shape — though ever so slightly. In fact, the Earth is slightly “podgier” at the equator by around 21,300+ meters (70,000 feet) than compared to the poles (on average).

Not only that, but Earth’s “internal” gravitational forces are also not equal across its surface and are constantly changing (though very slowly).

It is a combination of these factors, that primarily causes the two high tides and two low tides which anyone who lives by a coastline are more than familiar with. All this water moving up and down, twice a day, has an immense amount of energy that has the potential for human exploitation.

And that is where technologies like tidal turbines “earn their crust”. By effectively tapping into an endless supply of free energy, tidal turbines are pegged as being an important part of the energy mix of many nations around the world — especially those with large tidal ranges, like the UK.

To tap into this energy source, tidal generators work much like wind turbines, except that movements in the water column turn the blades, and subsequently turn a dynamo to generate electricity.

Tidal turbine rotors tend to be smaller than wind turbines (though not always) as water is much denser than air. This has the added benefit that the turbines can be placed closer together while still generating equivalent amounts of electricity to their “supra- marine” cousins.

This generated electricity is then transferred to the electrical grid via undersea cables that travel from the turbines to the land.

What is the largest tidal turbine system in the world?

At present, one of the largest tidal turbine projects is located off the coast of Invergordon in Scotland. This generator is a true monster, with 18-meter (59-foot) blades, weighing in at over 140 tonnes (286,000 pounds), and stands an eyewatering 22.5 meters (74-feet) tall.

This enormous tidal turbine is able, in ideal conditions, to generate enough electricity to power around 1,000 homes. That is impressive, to say the least.

While this all sounds great, tidal turbines do come with some limitations. For example, they need to be sited near to the point where the electricity they generated will be consumed. For this reason, among others, tidal turbine “farm” locations can be limited, but are ideal if the conditions are right — like in Scotland and other locations around the United Kingdom.

In the US, most tidal turbine projects are located along the coast of Alaska, where population centers are still relatively small.

However, in contrast to wind power, tidal power is very predictable. For this reason, it is easy to decide where to put tidal turbines and determine how much energy they will generate.

The blades of tidal turbines also need to be completely submerged to operate which means they are “out of sight, out of mind” and cannot spoil the view like large wind farms. Win, win.

How much do tidal turbines cost?

The cost of any large infrastructure project, like tidal turbines, varies widely, depending on conditions at the intended site, as you can imagine. In general, tidal turbines are inherently more expensive to invest in than their above-water alternatives.

Some estimates for tidal energy in places like Canada estimate costs of around $0.66 Canadian per kWh to install. This compares to around $0.2-0.3 per kWh for offshore, above-water turbines.

In the rest of the world, the costs come in at around this level too.

What is the Atlantis project?

SIMEC Atlantic Energy (“Atlantis”) is working on a number of projects involving specially-designed tidal turbines developed in collaboration with Asturfeito SAU and GE. Atlantis is, in their own words, “a global sustainable energy company, aiming to become the leading independent sustainable power generator in the UK.”

To date, they have successfully developed sustainable energy projects with a total capacity of 1,000MW around the world. These projects have included the world’s largest flagship free-stream tidal power project, MeyGen. The company also provides supplies and maintenance services for their turbines.

Their tidal turbines tend to be fixed to the seabed via a gravity base or drilled pylons and are connected to the electrical grid using an armored power export cable. This cable is normally controlled using a standard SCADA system.

Atlantis’ turbines are pretty sophisticated and have active pitch and yaw, and can be installed with relative ease once the foundations are complete on the seabed. According to Atlantis, this can typically be achieved within 45 minutes to install the nacelle unit.

Units can also be retrieved in an equally rapid time. Installation and decommissioning also do not involve the use of divers, making it safer and cheaper.

Each of their turbines has a typical operational life of 25 years with 5-yearly maintenance cycles.

To date, Atlantis produces various models of tidal turbine including, but not limited to: –

Their AR1500 was developed in collaboration with Lockheed Martin and has a designed capacity of 1.5MW. It has an active pitch and yaw capability and weighs around 150 tonnes out of water. Its rotor is 18 meters tall and is, by all accounts, a very reliable turbine.

The Atlantis SEAGEN U is another 1.5MW horizontal axis turbine that also has active pitch capability to the AR1500.

The SEAGEN-S/F is a smaller 1MW horizontal axis turbine designed for floating or surface piercing foundations. It weighs 100 tonnes and also has an expected operational life of 25 years.

What is the current status of Atlantis projects?

Atlantis, as we have already mentioned, have already deployed some of their smaller turbines to various tidal turbine farms — primarily in Scotland. They made the news back in 2019 with the announcement of the development of the AR2000.

Atlantis’ AR2000 is being designed in conjunction with GE and is expected, according to Atlantis, to become the world’s largest and most powerful single axis turbine ever developed (once complete). These turbines are scheduled for deployment a the MeyGen Project in Scotland in the not too distant future.

Another exciting development for Atlantis is their “Clearwater Project”. Funded by a European Commission grant awarded under the FP7 program for 7.7 million Euros, the CLEARWATER consortium, led by Atlantis Resources Ltd is tasked with the design, construction, installation, and operation of an open ocean tidal energy farm in the Inner Sound in the Pentland Firth. Located off the Northern coast of Scotland it will form part of the wider 398MW Agreement for Lease of the MeyGen project.

But, they recently made the headlines after news that they had secured a 1 million Euro grant from the EU’s  Executive Agency for Small and Medium-sized Enterprise (EASME).

The grant was awarded for their up-and-coming variable pitch system for tidal turbine generators project (VPSTTG) turbines that promise to reduce the cost considerably of tidal turbine electrical generation.

“This project and grant is key to developing a reliable, low-cost tidal turbine that can be installed in a demonstration project further reducing the LCoE (Levelized Cost of Energy) of tidal energy,” said EASME.

VPSTTGs will be technically challenging to achieve and will be responsible for the safe control of a tidal turbine’s rotor speed and power generation throughout a tidal cycle. This is achieved by mechanically adjusting the pitch of rotor blades via the use of specially designed actuators.

Systems like this are currently very expensive and make up a significant proportion of the tidal turbine’s capital cost. It is the hope of this new venture to drastically reduce the cost of such systems.

It is also hoped that the new project will explore the possibility of connecting turbines to share a single subsea cable (rather than having one each) which should reduce cost by as much as 20%.

“This project will be designing, manufacturing, and testing one new VPS for an upgraded AR1500 turbine. It will enable Atlantis to prove to potential investors that the right steps are being taken in order to receive funding to build three turbines at the MeyGen Phase 1B demonstration project,” EASME added.

Atlantis said in a statement on the matter that, “this VPS system will be used on future turbines supporting the evolution of the tidal industry as a whole, further developing the industries European supply chain and giving the planet more efficient and affordable access to renewable energy,”

“This is an exciting time for the company,” said Atlantis’ Director Drew Blaxland. “As we work together with Asturfeito to make the cost of tidal energy more affordable and accessible for all. We would like to thank the Executive Agency for their continued support and the amazing project team who have taken us to this stage,” Blaxland added.

Ricardo Rodriguez, General Manager Asturfeito added that “our team is very proud to support Atlantis in this challenge to bring tidal energy to the next step of industrialization. At Asturfeito we believe in the development of sustainable energy sources, and this collaboration fits perfectly with our strategy.”

Exciting times for companies like Atlantis and the renewable energy sector as a whole. It will be interesting to track the progress of the AR2000 and their new EU-funded project.

As Sebastion from “The Little Mermaid” famously said, “life under the sea is better than anything they’ve got up there”. Well, we are not sure about that, but when it comes to energy generation he might have been on to something.