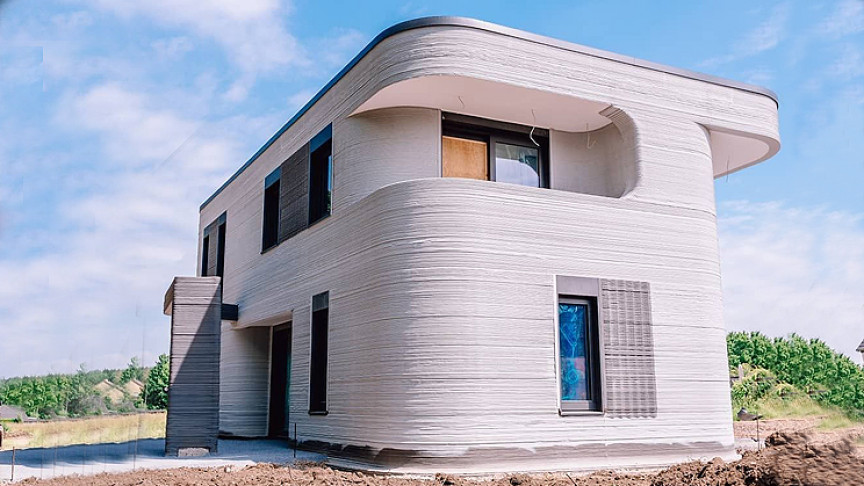 Back in September 2020, the construction of Germany’s first 3D-printed residential building began in Bavaria, Germany. The structure was designed to be a showstopper in every way: Accommodating five flats over three floors with around 4,000 ft² (380 m²) of living area, it is created utilizing a 3D construction printer called ‘BOD2’, which is reportedly the fastest on the market.

Now, after 100 hours of 3D printing and ten months, the building is close to completion. With only five weeks left to the finish line, the house will begin to accept visitors from August on, and it already looks spectacular.

The house is built by PERI, a family-owned building company, who teamed up with the Danish manufacturer COBOD who supplied the printer. The building technology used in the making of this house, which was put into practice in Germany for the first time, has come through all of the regulatory approval processes, according to a press release.

The system has a print head that travels along three axes on a sturdy metallic frame, allowing the printer to move to any location within the structure and only needing to be calibrated once. This saves both time and money.

Moreover, the printer can analyze the pipes and connections for water, electricity, and other utilities that will be added later, and works in such a way that printing can take place while other tasks are being done in the printing area. This way, manual tasks such as installing pipes and connections can be completed while the construction is still being printed.

The structure is made up of triple-skin hollow walls that are filled with an insulating material. The BOD2 can complete 1 square meter of a double-skin wall in under five minutes at a speed of 2.2 mph (1 m/s). The printer with the print head requires two operators, and the print results are watched via camera.

The structure was printed using a substance dubbed ‘i.tech 3D’ created by HeidelbergCement, which claims to have ‘excellent pumping and extruding characteristics.’ The material is designed to meet the unique needs of 3D construction printing, and apparently works flawlessly with the BOD2 printer.

Once completed, the flats will be rented out, with one of the units serving as a display unit. With a slew of other projects in the printing loop and 3D printing’s growing popularity, it looks like other 3D-printed structures will follow suit and find themselves a place in Germany’s distinct architecture.