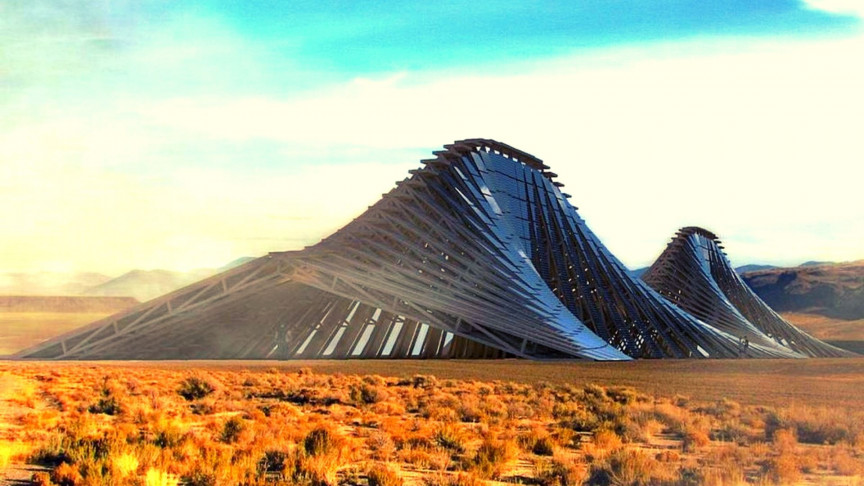 Designs of the future are increasingly centering on environmental impact as the effects of climate change start to reach world-historical levels. This means not only engineers, but architects and artists are exploring new and unprecedented ways of reimagining their work to minimize intrusion on the natural environment.

Burning Man is a well-known annual event that brings a lot of entrepreneurial people into the presence of artists, which makes the development of a “Solar Mountain” to potentially power the 3,800-acre ranch of Burning Man with 300 MWG of power per year less of a stretch of the imagination.

And if the design is brought to completion, it could enable civil engineers and artists to reimagine the way we generate power for communities around the world, in an unprecedented wave of nature-oriented collaboration.

‘Solar Mountain’ could hint at the future of eco-friendly architecture

The new design incorporates a gigantic assortment of solar panels stretching down a gradient from a central spine. The architects behind the new project claim it was inspired by the natural landscape of Fly Ranch — where Burning Man takes place. The company — literally called NUDES — thinks this unconventional curving form more capably fits the dynamic landscape of geysers, wetlands, and hot and cold springs. As one of the 10 shortlisted proposals for the LAGI 2020 Fly Ranch design competition, NUDES plans to build a modular design composed of recycled wood and other eco-friendly materials.

The Solar Mountain is comprised of 182 solar panels, each with a 300-Watt capacity, and a daily potential energy generation figure of roughly 318,645 kWh per year. And unlike, say, a conventional solar array park, the forthcoming Solar Mountain installation doubles as an interactive feature and community center for Burning Man joiners. “The narrative behind the design is divided into three parts: grow energy, interact, and play,” said NUDES Founder and Principal Nuru Karim, in a My Modern Met report.

When the litany of solar panels moves outward from the central spine, they engender a semi-covered walkway for people — where patterns of curious light accompany a passerby’s way from the panel strips above. The Solar Mountain project is now moving on to its next design stage, which means it could effectively become an artistic workshop for new approaches to architecture and sustainable engineering that we’ll see in the future of solar power applications.

Crucially, the modular design of Solar Mountain means technology developed in its construction could offer communities around the world new and eco-friendly alternatives to less sustainable forms of energy. Imagine living and working in a gigantic solar powered-frame in a city as old as Rome — providing shade and electricity without damaging the ancient architecture underneath. Imagine!

The wavy surface of Solar Mountain uses solar photovoltaic panels mixed with recycled timber to offer a permanent and off-grid power source. The installation will juxtapose nicely with indigenous animal species and more than 100 species of plants in the area — shooting for an aesthetics of “seamless blending,” to suggest to all participants that human ingenuity, communities, and endeavors are actually complementary to the environment, rather than a burden. Each solar panel in the installation is 100ft (30m) long, between 16ft to 100ft (5m to 30m) wide, and reaches a maximum height of 50ft (15m). Obviously, a gigantic structure in the middle of the desert will also offer shade to overheated Burning Man attendees.

The energy from Solar Mountain could realistically reduce the carbon footprint of Burning Man, which — not counting the titular burning of a giant wooden man that serves as the climax of the event — has typically seen countless motorized fossil-fuel vehicles gather in the desert, making the proposition of living in or finding a hidden harmony with nature fairly ironic, from a strictly ecological perspective. But maybe that’s about to change, and Burning Man will become an authentic force for good in the world. Anything’s possible.