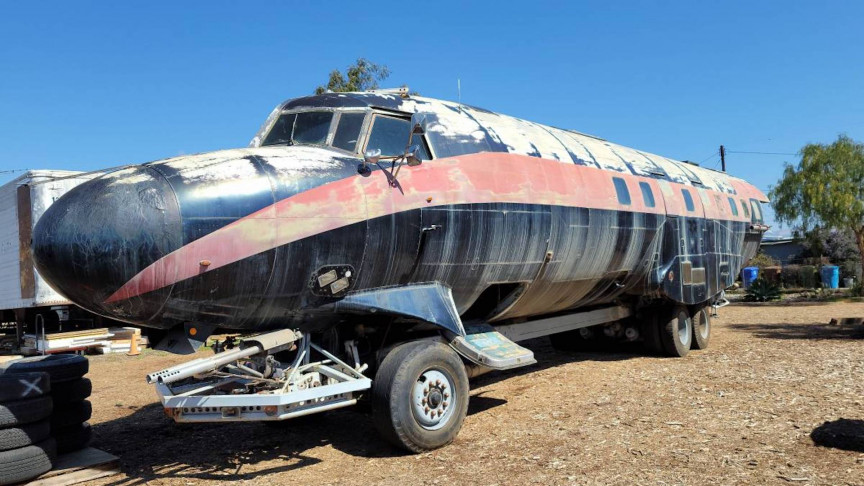 2020 was a big year for RVs as stay-at-home rules boosted the appeal of off-grid living and socially distanced vacations.

That’s fine by us as, by extension, it means more attention for our favorite subset of the motorhomes — the converted airplane RV.

A CraigsList ad from this month, originally reported by The Drive, shows a Fleetwood RV with the outer shell of a Convair airliner for sale in California for a tidy $28K.

Listed in the Bay Area Craigslist, the 1979 Fleetwood Pace Arrow RV had its body replaced with the fuselage of a Convair CV-240, which were developed between 1947 and 1954.

Airliner RV ‘Andromeda’ was the ‘mothership’ of an entire fleet

While you may have heard of that private limo jet that added a touch of class, tinged with absurdity, to the “airliner RV” last year, this airliner-bodied Fleetwood RV’s dusty exterior makes it look like something scrapped together in the post-apocalypse — it also reminds us of this jet engine converted into an epic BBQ grill.

The Craigslist ad states that the airliner RV was constructed in the early 80s by a Tony Tosta and a Jason Von Straussenburg. An article in the Santa Barbara Independent sheds light on those two characters: Von Straussenberg, in particular, has a colorful past that includes escaping a Michigan prison in 1972 and evading the law for three decades.

In 1983, Von Straussenburg met Tosta in Southern California, where the two built an entire fleet of vehicles using scrapped aircraft parts. The “mothership” of the fleet was the Convair RV, which was dubbed “Andromeda” by the pair.

Amongst the tales told in that article are one of an inebriated woman seeing the RV hidden behind shrubs and bamboo and calling the police as she believed it to be a crashed plane.

As for turning the Convair-body RV in tight spaces, the ‘Andromeda’ could give the Ever Given a run for its money — Von Straussenberg recalls having to lift the rear of the plane using a 20-ton jack after it became lodged on an intersection.

Impressively, the Andromeda retains much of the original machinery of the Convair cockpit, allowing it to be driven from either of the plane’s original pilot or co-pilot steering wheels.

Aviation enthusiasts will undoubtedly love the old cockpit technology still on display around the steering wheels.

At the back of the Frankenstein RV is an open area with a sound system as well as a hot tub, a kitchenette, a lavatory, and a refrigerator. A gangway, meanwhile, works as a sleeping area, allowing passengers to gaze up at the stars.

All of the amenities are off-grid-friendly, the Craigslist sellers say: Andromeda is “powered by 50 amp landline plus generator and solar power, [meaning] this would be a very unique way to live sustainably.”

For anyone wondering why the Andromeda RV is no longer in the hands of its original creators, Von Straussenberg — really an alias for Roger Crona — was caught by the police in 2008 following an anonymous tip-off, and was made to carry out the remaining years of his sentence.

He was originally imprisoned for altering registration plates and possession of a forged registration, according to the Santa Barbara Independent, both of which are felonies in the state of Michigan.

Though the current owner says the “Andromeda can cruise down the freeway at a comfortable 65 mph,” they also admit the vehicle “needs some TLC and [a] paint job.” We’ve no doubt that whoever buys it will do so for the stories more than anything.