These Drones Will Plant 1 Billion Trees in Just 8 Years 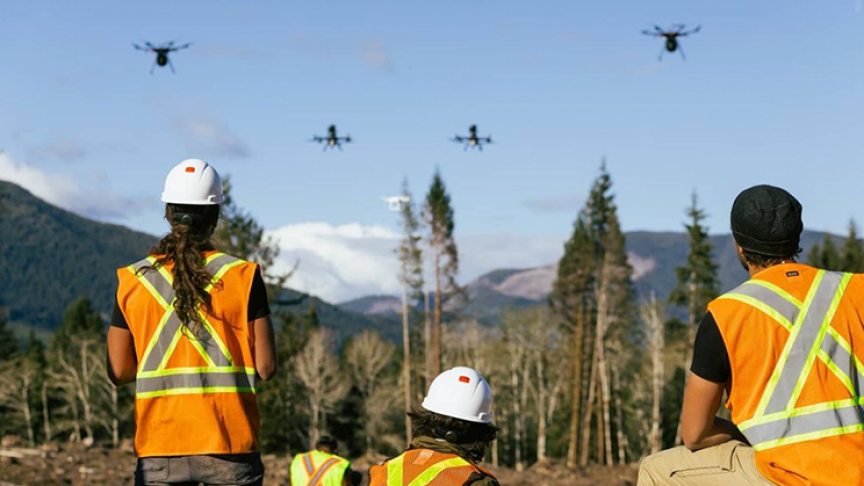 In that sweet spot where forestry meets technology, a Toronto-based startup called Flash Forest is employing aerial drones to plant trees 10 times quicker than a single worker planting with shovels, with a goal of planting a full 1 billion trees by 2028.

The company modifies drones to fire rapidly germinating tree seeds into the soil, combining technology, software, and ecological science to outperform traditional tree-planting efforts at a time when accelerated global reforestation is much needed. Moreover, this technology does its job at a cost that is 80 percent cheaper than traditional tree planting methods.

The heavy-lift drones are outfitted with a pneumatic firing system which allows them to place the planting pods at the optimal depth into the soil. This allows the team to get into trickier areas where human planters wouldn’t be able to enter.  Each tree pod is handcrafted, containing at least three pre-germinated seeds, mycorrhizae, fertilizers, and some other ingredients loved by plants, which are kept secret by the team.

The process of planting the trees starts with the startup deploying mapping drones to assess the area. Once the ideal places to plant, based on the soil and existing plants, are identified using software, a swarm of drones begins to drop seed pods with high precision. The pneumatic firing device comes in handy in steep terrain or mangrove forests, enabling the drones to propel seed pods deeper into the soil.

After planting, the team tracks the process and deploys a spraying drone to give nutrients to the seedlings, and another drone is used to keep an eye on the process of the plants’ growth. Furthermore, seeds are sprouted before planting, resulting in a more effective growth and a robust root system.

After the prototype devices were tested, the startup already planted trees throughout Ontario, Canada. The company wants to bring the cost down to as cheap as 50 cents per pod.

This is not the only instance of technology being used to look out for our forests. If you visited the Uru-Eu-Wau-Wau tribe’s section of the Amazon forest in Brazil, you would notice a surprising tool used by the locals to keep an eye on illegal deforestation.