These Countries Have the Best Netflix Catalogs 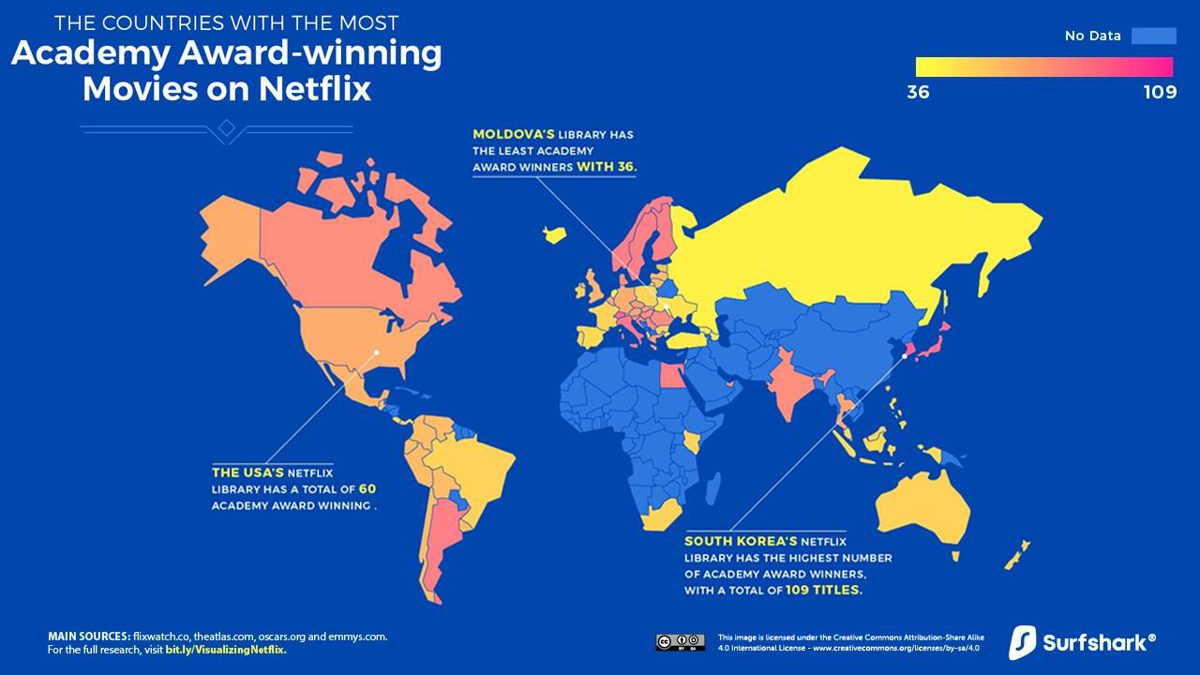 Netflix is available in 190 different countries, but the catalog of film and TV shows is different depending on location. Ever wonder which country has the biggest and best collection of content? VPN service SurfShark conducted a study that produced several informative infographics about the volume and quality of the world’s Netflix catalogs.

The study used data from the Netflix database Flixwatch to find out which titles are available in the website’s 70 countries. It then used the IMDb ratings, Metacritic scores, and awards for every title to determine which countries have the most content and which have the overall best titles.

SurfShark found that Netflix in the United States has the most titles overall—5,879 movies and shows—while Canada has the biggest catalog of movies, at 4,043 films. Having the biggest library doesn’t mean having the best catalog, though: The US and Canada actually have the joint lowest average IMDb rating (6.95), while Azerbaijan, Portugal, Georgia, Ukraine, and Russia are tied for the top spot with a rating of 7.13.

South Korea, meanwhile, has the most prestigious catalog: 109 Oscar-winning films and 35 Emmy-winning shows. The country outpaces the competition with 24 more Academy Award winners than the next nation, Switzerland. Thailand, Malaysia, Philippines, Indonesia, and Singapore each have 35 Emmy-winning tittles in their collections.

India may have the most balanced library in terms of quality and volume: It has the highest average IMDb audience rating (7.12) out of the top 10 countries with the most titles (5,591).

And though the United States might have the most titles, it doesn’t have everything. But you may be able to gain access to additional content by using a VPN. Just select a server in the right country, and you can gain access to movies and shows you can’t watch in America.

For example, the only places to watch Forrest Gump on Netflix are Western Europe, India, South Korea, Japan, and Egypt. When it comes to Pulp Fiction, only Canada, Mexico, South America, and most of Europe gets it. The entire Godfather Trilogy is available only in Canada, Russia, parts of Europe, Australia, Japan, and Egypt. Americans looking for Friends will have to turn to HBO Max—or you can plug into the catalog from Canada, Mexico South America, Europe, and India. And the only countries in the world who can watch Lost on Netflix are South Korea and Japan.