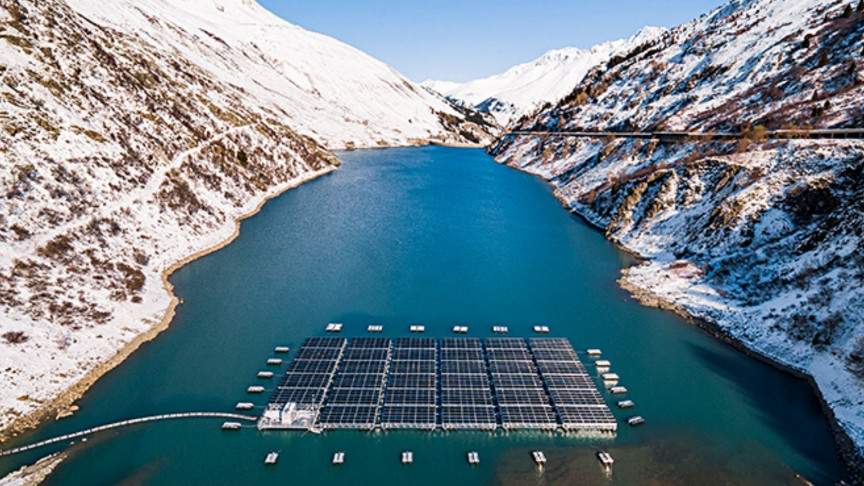 Researchers worldwide are turning to innovative methods for seamlessly fitting renewable energy technology into spaces that already serve another purpose, reducing the need to set aside acres of land for technologies such as solar farms.

One of the latest examples comes from Romande Energie, who built a floating solar farm on a reservoir in the middle of the Swiss Alps, a report from Euronews explains.

The project recently won the Swiss Watt d’Or prize, for the best in renewable energy innovation 2020. The solar farm is located at an altitude of 1,800 meters above sea level on the Lac des Toules reservoir in Valais, Switzerland, which already serves as a hydropower station.

The solar farm is built up of 36 floating barges and more than 2,000 square meters of solar panels.

The benefit of having solar panels at such a high altitude is that solar radiation is stronger. In the mountainous region, the winter months surround the reservoir with snow, which also serves to reflect sunlight towards the panels.

The project is undergoing a two-year trial period, during which researchers will analyze the system to see whether it is viable at a larger scale, and whether it can be duplicated on other reservoirs worldwide. The trial is the culmination of a €2.2 million project and six years of research and development.

Romande Energie’s solar farm project is one of many innovative initiatives that aim to transform the way renewable energy solutions are implemented on a global scale.

Scientists in California recently stated that suspending solar panels above canals would reduce the need for land devoted solely to solar farms. At the same time, such a project would prevent water loss from evaporation and would also keep the solar cells cool, making them more efficient.

Other initiatives that aim to make renewable energy technology inconspicuous within urban spaces include the AuREUS solar panels, which have the potential to convert the windows of large office blocks into constant energy generators. A startup, Halcium, also recently announced small portable wind turbines for city spaces that look like dustbins.

Not only do these types of projects allow for more efficient use of the world’s land resources, they are also less likely to be opposed by local communities as they fit seamlessly into the surrounding landscape.