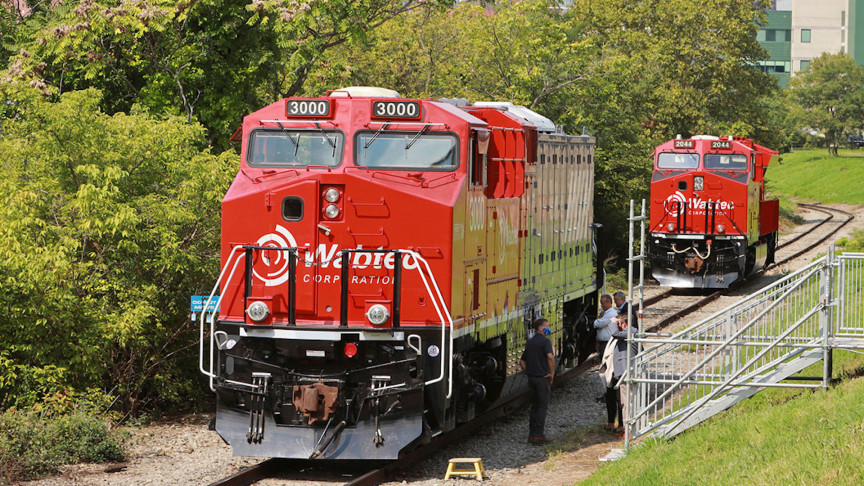 The Pittsburgh, Pennsylvania-based firm claimed its new machine is “dramatically more powerful” than a Tesla electric car and that it can help to significantly reduce carbon emissions for the already relatively green freight train transportation sector.

The train’s battery-powered electric powertrain can be paired with a traditional diesel engine to reduce fuel consumption by over 11 percent, also leading to an 11 percent reduction in carbon emissions – the equivalent of removing over 6,200 gallons of diesel fuel and offsetting almost 70 tons of carbon emissions, Wabtec explains.

The new train, called the FLXdrive, completed a successful trial run in California earlier this year, traveling 13,000 miles (20,920 km) between Barstow and Stockton over the course of three months. The 430,000-lb (195,044-kg) train runs on 18,000 lithium-ion battery cells allowing it to produce up to 4,400 hp. The train has an energy capacity of 2.4-megawatt-hours and it can recharge via regenerative braking, as is demonstrated in the video below.

The FLXdrive uses an AI-enabled cruise control system called the Trip Optimizer system to manage the flow of energy in order to optimize energy efficiency. Wabtec is also already developing a second-generation battery-powered train with a capacity of 7-megawatt hours, which it says could reduce fuel consumption and carbon emissions by up to 30 percent. In an interview with The Guardian, Eric Gebhardt, Wabtec’s chief technology officer, described the next-gen train as having “100 times the power and energy within a Tesla – it’s dramatically more powerful.“

This week, the same day Wabtec unveiled the FLXdrive, Australian mining company Roy Hill announced in a statement that it has purchased the first of Wabtec’s commercially available FLXdrive trains. The company will receive the second-generation version of the FLXdrive locomotive when it is completed and delivered in 2023. Roy Hill operates a 214-mile (344-km) iron ore mining railroad in Western Australia’s Pilbara region.

The new train was developed as part of a collaboration between Wabtec and Carnegie Mellon University in order to help give rail an added boost, though it is already at an advantage when compared to road and air transport. The transportation sector is the source of greenhouse gas emissions in the US, though rail is responsible for only 2 percent of the sector’s total emissions — estimates suggest that a shift to rail and away from road transportation could reduce emissions by 75 percent. Still, the Wabtec and Carnegie Mellon collaboration set out to develop zero-emissions technology to help move the massive 1.7 billion tons of cargo that are transported on railroads in the US every year.