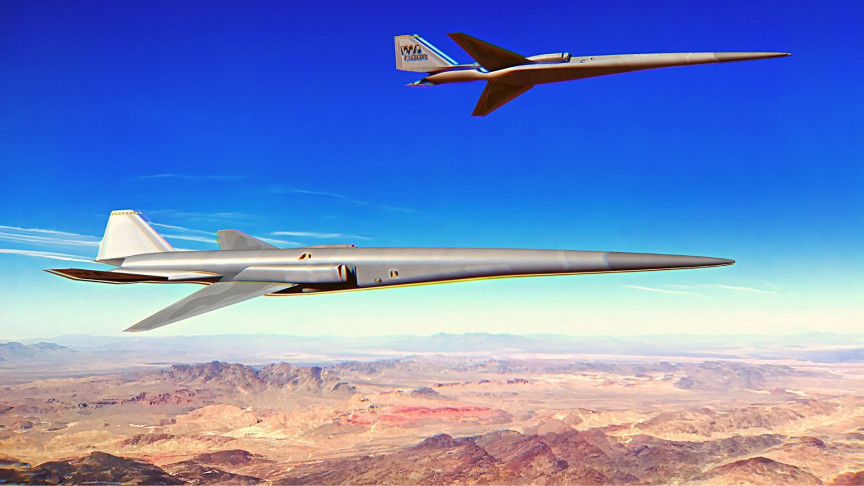 The United States Air Force has selected a transport company for a contract to develop a “low-boom” supersonic uncrewed aerial vehicle (UAV) demonstrator, which will become the first supersonic UAV to assist the Air Force in its training of pilots, according to a press release shared with IE via email.

And if the UAV demonstrator proves effective, it could contribute vital data to research for and the eventual development of supersonic airliners that can break the sound barrier without the disruptive “boom.”

Called Exosonic, Inc, the aerospace company was awarded the U.S. Air Force’s (USAF’s) Direct to Phase II Small Business Innovation Research (SBIR) contract in partnership with Air Combat Command and the Air Force Research Laboratory, in addition to the Presidential and Executive Airlift Directorate. The novel vehicle will demonstrate new technologies that are specifically demanded by Exosonic’s quiet supersonic airliner, and serve as a shortcut to building new revenue. Once completed, the company aims to reinvest its UAV profits in the further development of forthcoming supersonic products, like airliners.

“Our vision is to fly people [everywhere at] supersonic [speeds,] with our airliner designed to fly supersonic overland (sic) with a muted sonic boom,” said CEO Exosonic Norris Tie, in the press release shared via email. “The supersonic UAV work is critical to our company’s strategy due to how much we’ll learn about designing, manufacturing, and maintaining supersonic airplanes with our first UAV products. The UAV is also important to our company’s longevity. It will provide profits that we can funnel back into our company and give investors, suppliers, and customers confidence that we can deliver supersonic aircraft to the market before anyone needs to make a multi-billion dollar investment.”

Pilot training may never be the same once the UAV is completed. Expected to function as a near-peer adversary for fighter pilots to challenge in live flight training, it could prove crucial to preparing human pilots for the future of air combat. This is especially true in light of constrained training budgets and an increasing pilot shortage, which has left the USAF incapable of efficiently preparing new, fully-trained fighter pilots. This means fewer fighter pilots are receiving adequate live air training in preparation for real-world rivals. To remedy this gap in training, Exosonic’s supersonic UAV will serve as a functional “mock adversary,” to generate high-stress scenarios for fighter pilots while in live flight exercises.

Supersonic airliners without the disruptive ‘boom’

The UAV (and the human-piloted fighters) can be equipped with multiple payloads and sensors, establishing a new means of training at a fraction of the usual cost of fighter pilot training (like, for example, the Top Gun program). In lowering the cost of fighter pilot training, the USAF could potentially save taxpayers millions of dollars, in addition to reducing the wear on existing USAF operational aircraft that are typically designated as mock adversaries. This also means that fighter pilots will be able to center their flight time on blue (friendly) air training, instead of having to play the aggressor during flight exercises.

“Tactical Air Support is excited to see an emerging supersonic UAV platform that can operate jointly with a piloted contract adversary like the Tactical Air Support F-5 Advanced Tiger,” said Director of Communications Jim DiMatteo of the government contractor Tactical Air Support, who is also an F-5 ADAIR pilot. With tensions mounting overseas, and several other nations exhibiting new advances in drone and UAV technology, in addition to artificial intelligence, supersonic UAV training could transform USAF for the 21st century of warfare. And, if Exosonic’s product line continues with further concepts, we may soon see commercial airliners capable of reaching supersonic speeds without the disruptive boom typically associated with faster-than-sound aircraft.