The Solution to Our E-Waste Problem? Repair, Don’t Waste 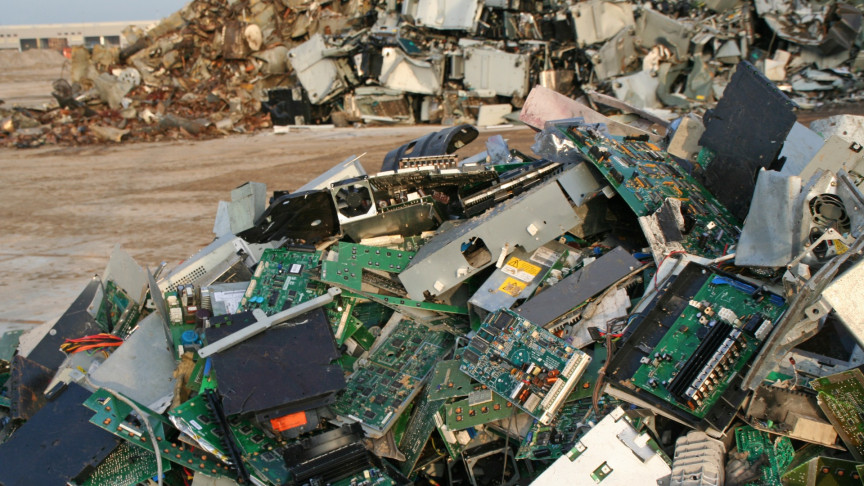 The modern world runs on electronic systems that are designed to last many years. Tons of natural resources are carved out every day to produce semiconductor chips and other components. These will eventually be mounted on printed circuit boards (PCB) and will effectively become the brain of most pieces of industrial technology. These expensive circuit board assemblies are used in industrial applications to help control our vehicles, production machinery, airplanes, wind turbines, and so on. Typically costing from a few thousand to tens of thousands of dollars, they are ultimately used to manage power, safety systems, monitoring devices, quality checks, and many other functions.

The problem is that, over time, the components that make up these circuit boards get tired and die. Software “upgrades” can also slow down or otherwise affect their functioning.

In either case, a technician or engineer armed with the right diagnostic tools and training could diagnose the issue, replace the broken down and generally inexpensive components and save other components in the device from being dumped along with the circuit board.

So, why do so many circuit cards, and sometimes entire pieces of equipment, continue to be thrown away?

The problem with E-waste

Replacing faulty industrial technologies for new ones is wasteful, unnecessary, and aggravates the E-waste issue. According to the United Nations University, more than 50 million tons of E-waste are produced globally every year. It’s past due time for the replace-not-repair mentality to be phased out across the business spectrum.  It’s an essential step to eliminating waste, lowering emissions, and saving precious resources.

In a conversation earlier this year, Scott Sulivan, an electronics technician in a major US-based railway company repair shop, reported bushels of faulty, high-value boards were routinely tossed in the dumpster. Hating to see the waste, he took some of the boards home and found that most were easily repaired. His suggestions for repairing the circuit boards were ignored. If top management understood the magnitude and value of the waste, he said, “heads would roll.”

Using new boards to maintain equipment is not only costly but also a poor use of resources. Using new boards requires maintaining an inventory of those boards. If boards are not in stock, they must be ordered. The time it takes to acquire the boards equates to downtime for the equipment. Depending on the type of equipment, that can mean lost productivity and lost revenue or worse.

Industrial electronic waste has been allowed to grow exponentially over the last decades under the false assumption that a repaired system cannot perform as good as new. OEM (Original Equipment Manufacturer) policies often discourage board repair. In cases where they don’t, technicians often aren’t given the right tools to make the necessary repairs.

So, billions of dollars go down the drain, and tons of natural resources become nature’s toxins, especially in emerging economies that are destinations for the world’s rubbish. The heavy metals used in producing electronic components poison the soil and water. Other parts poison the air when they are burned.

A better solution to E-waste

The pandemic has reminded us that, without electronic components, you cannot make anything. The chip shortage has led to limited supplies of vehicles, appliances, and even military equipment. It has also limited the economy with the auto industry set to lose $210 billion in 2021 according to the consulting firm AlixPartners. Businesses scramble to find parts for manufacturing and are prone to seek supplies from sources they would not use in normal times.

The risk from counterfeit components has never been higher.

In shops that are repairing some boards, the techs are using oscilloscopes and digital multi-meters. These are staples of any test bench, but they were not designed for troubleshooting circuit boards. Isolating the problem on a circuit board with a scope and a multi-meter takes hours or days longer than doing it with instruments and software that are designed for fault isolation such as the universal test equipment BoardMaster. At Collins Aerospace, engineers have found that this tool can test optocoupler chips in seconds compared to 3 to 5 days using traditional instrumentation.

It’s hard enough to hire and retain good technicians. Giving them the wrong tools for the job makes the work more stressful. It’s a formula for motivating the best technicians to be the first to leave for a better position.

In 2015, an international movement called “Repair, don’t waste” founded by that company I work for, ABI Electronics, was created to emphasize the sustainability and cost-effectiveness of repair over replacement. After all, equipment that is already on-site and is monitored by the maintenance department and can be quickly fixed on-site, offers more uptime and availability. Plus, the cost of repair is on average about 10% of the cost of a new circuit board.

In the wake of movements like #RepairDontWaste and Right to Repair, universal troubleshooting repair technologies, training, and standards have been successfully employed by leading public and private organizations operating in defense, mobility, aerospace, manufacturing, and renewable energy industries to tackle waste and emissions in-house.

A solution with proof that it works

In 2019 research carried out by automotive manufacturer PSA Group, which produces the Peugeot, Vauxhall, and Citroen brands, revealed that repairing electronic circuits to the correct standards produces 85% fewer emissions compared to sourcing and buying new.

While a lot of OEMs are wedded to the model of selling new capital equipment as often and as much as possible, the world is changing. Equipment life will be extended, one way or another, either by the customer using dedicated electronic diagnostic systems and training from organizations like ABI Electronics, or the OEMs can do it themselves. The servitization model followed by companies like Schindler Elevators, which includes the long-term commitment to offering valuable maintenance and lifecycle support of critical assets, can provide a substantial stream of revenue to OEMs.

It is remarkable to see big players flexing their muscles and turning down the lights on the throwaway mentality. The rail transport sector is a great example. Organizations like Sao Paulo Metro, the world’s third-largest suburban train system, repairs all electronic circuit boards in-house. These boards manage braking and traction systems, door controls, A/C, and more. As a result, savings of 50 million dollars were reported by the organization over the last decade alone. Since the mid-2000s, more than 60 rail operators across the world adopted the “Repair, Don’t Waste”.

Semiconductor manufacturers like Samsung and NXP maintain their production lines with in-house predictive maintenance and repair of their automated systems. GE Renewable Energy, Lockheed Martin, Collins Aerospace and Thyssenkrupp Elevators are among companies that have recently developed or enhanced their electronic repair shops.

Collins Aerospace, a division of Raytheon Technologies, is not just repairing their own manufacturing systems. They have contracts to repair the electronics from an array of military aircraft and the commercial airliners of more than 90 of the world’s airlines.

For years, the defense sector has relied on in-house repairs. A US Army National Guard unit recently used its smart electronic diagnostic system to get a mobile command post back in service. Vehicles like this are loaded with expensive computers and security gear that’s packed in an airtight, RF-shielded steel housing.  Heating, ventilation, and air conditioning (HVAC) for that sealed space is not a luxury – it’s a necessity.  So, when the HVAC on one of the mobile command posts recently failed, it had to be taken out of service.

The OEM said that parts were no longer available for that HVAC system, and a third-party service provider was stymied by the problem. But a determined Army technician using the right tool for the job repaired the HVAC to put the command vehicle back in service, saving US taxpayers something on the order of $10 million.

More needs to be done for the “Repair, Don’t Waste” movement to become mainstream.  It needs help from all levels of education.  It’s a challenge for the media, and not just technical publications, to change old ways of thinking. Advancing the “Right to Repair” movement will encourage industrial OEMs to stop putting obstacles in the way of customers who want to self-maintain.

And more companies need to proclaim on social media, as Collins Aerospace recently did, “We are proud to join the #RepairDontWaste community.” The whole world stands to profit massively from industrial electronics being kept going for longer.

Willian Santos is the Head of Sales and Marketing at ABI Electronics.