The Real Minesweepers Are Changing Lives and Saving Limbs 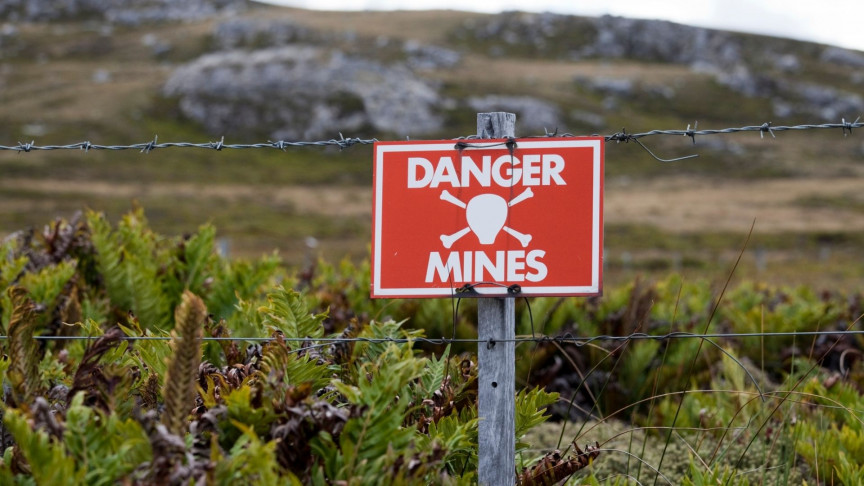 Simply put, landmines continue to have a devastating effect on the countries in which they were once used as a tool of warfare. Even long after the battles were won and lost, these explosive devices remain buried beneath the ground where they indiscriminately destroy lives, killing and maiming innocent people who happen to stumble across them. And today, a lot of research and attention has been going into solving this problem in the cheapest, most efficient way, and with the least number of casualties.

Essentially, a landmine is a bomb that is designed to be placed under, on, or near the ground or other surface area. They can be triggered by pressure, a tripwire, or remote command. The goal in placing them is to disable enemy combatants or vehicles. Once they are tripped, an explosive device is detonated — often spewing shrapnel, or tiny fragments of materials (such as metal, or bullet fragments) that can rip through bones and tissue, causing catastrophic injuries.

Shrapnel might be the most dangerous consequence of encountering a landmine. If the explosion itself doesn’t kill you, you can bet that shrapnel will damage your body, and you’ll be extremely lucky if you survive.

It’s estimated that there are approximately 23 million landmines that are still unaccounted for in Egypt, some left over from as far back as World War II, and another 16 million in Iran, left behind from the Iran-Iraq war. The longer these devices remain hidden, the more danger they pose. It has been shown that over time, the detonator and main charge of these devices eventually deteriorate to the point that they become uber-sensitive to any nearby movement, which obviously poses a huge problem for any cleanup efforts these countries decide to undertake.

Science and technology present a solution

Once the conflict ends, it is important to begin the process of “demining.” The goal is to clear the land of any explosive devices that pose a risk to the population. Currently, there are an estimated 110 million landmines scattered across dozens of war-torn countries, and approximately 26,000 people per year (or roughly 70 people per day) die due to these devices.

Many die while trying to collect parts of the metal mines for scrap, or by accidentally triggering the mines. Here’s a look at a few different technologies, both old and new, that are working to clear affected areas of these destructive weapons.

Probably the oldest and most remedial manner in which we locate landmines is through the use of metal detectors. The effectiveness varies according to the depth the landmine was buried at, what materials it is comprised of, and the type of soil. Most devices contain enough metal for metal detectors to pick up, but it’s far from foolproof.

Along with the dangers of accidentally stepping on a landmine, research shows that the most powerful and efficient metal detector was able to find 91 percent of landmines in clay soil — yet merely 71 percent of test mines were detected in iron-rich soil. That’s a big variation.

One of the first devices used to detect and disarm landmines is something called a mine plow: It’s essentially a rake-like device mounted to a tank that can clear any buried or concealed landmines the vehicle may encounter. It pushes them to the surface and moves them clear of the tank, ensuring no one is hurt by an explosion or a piece of shrapnel. They were initially designed for use in warfare, as a way to clear a path for other vehicles to follow.

The huge tanks are pretty much blast resistant, and designed to either plow straight over, push landmines out of the way, or detonate on contact. The tanks are designed to minimize any damage from the encounter, and thanks to their work, military vehicles may follow in the plow’s path without fear of encountering an explosive.

Despite dating back to the Churchill-era, mine plows are still widely used, especially by the British. The late Princess Diana made demining her personal mission—even walking through an active minefield in central Angola with minimal protection. Her son, Prince Harry, continued in her footsteps.

Beginning in 1993, the Halo Trust began clearing mines from Mozambique, and the country was officially deemed mine-free in 2015. It’s estimated that the number of cleared landmines now exceeds 4.6 million since 1999, which is quite an amazing feat!

Of course, there’s always going to be a disadvantage to this technique: it requires a human operator, which means it’s not the safest option.

Unmanned, Autonomous Systems: The Way of The Future

There are a couple of different unmanned minesweepers out there in various states of development, working toward the common goal of clearing formerly war-torn regions of explosive devices. Here’s a look at a few of them:

The Mine Kafon Drone (MKD) is a drone that can not only detect landmines but can also detonate them. The drone is equipped with six rotors and various attachments. One of which maps the area, while the other, a metal detector attachment, detects the mines themselves. Once they’re marked by GPS, the drone goes back to the operator and they switch out the metal detector for a robotic arm. It, in turn, drops detonators the size of tennis balls over the explosive device, causing the landmine to explode safely, with no danger to humans.

A Kickstarter campaign was created to improve the design of the drone and it raised more than $214,000 out of its initial $85,000 goal. The team hopes to completely eliminate all landmines using this system in less than 10 years, which is a lofty goal considering it would take an estimated 1,100 years to get rid of all active landmines at the current rate of removal, and at a cost of between 50 to 100 billion dollars.

Created by the same team, led by the Afghani designer known as Massoud Hassani, is another autonomous device meant to detonate long-forgotten landmines. Called the Mine Kafon Ball, this interesting, light-weight device resembles a tumbleweed with toilet plunger arms, which are actually dozens of cheap bamboo legs, with plastic “feet” that are highly adaptable based on the terrain. It’s not so lightweight that it can’t detonate the landmines—it’s actually approximately the same height and weight of an average person. However, it is not so heavy that it can’t be propelled across the ground by the wind.

There’s a GPS device embedded in the device’s iron-cased core, which can map the device’s movements and ultimately give important data back to researchers regarding the location of landmines.

You might think that the ball isn’t durable enough to survive an explosion, but you’d be wrong. At most, technicians would just have to make minor repairs—replacing the cost-effective bamboo legs. Its creator believes one ball may be able to endure as many as 3 landmine detonations before needing new legs. Of course, that depends on the firepower of each landmine.

The Husky UGV is a prototype device developed by a team of researchers from the University of Coimbra’s ISR Embedded Systems Lab in Portugal. Chosen for its ability to adapt to harsh environments, the team based its design on the preexisting Husky UGV. However, their UGV was equipped with some new toys:

It has a navigation system; localized sensors to detect landmines; a ground-penetrating radar; and a robotic arm that is in itself a metal detector. Researchers hope this design will prove to be effective enough to make it past the prototype stage and into active use.

In addition to detecting landmines, this device can also help map the dangerous interiors of underground mines, which are notoriously dangerous and filled with hazards.

As long as the planet remains littered with these devastating devices. science will continue to find a way to make dreams of a landmine-free Earth a reality.