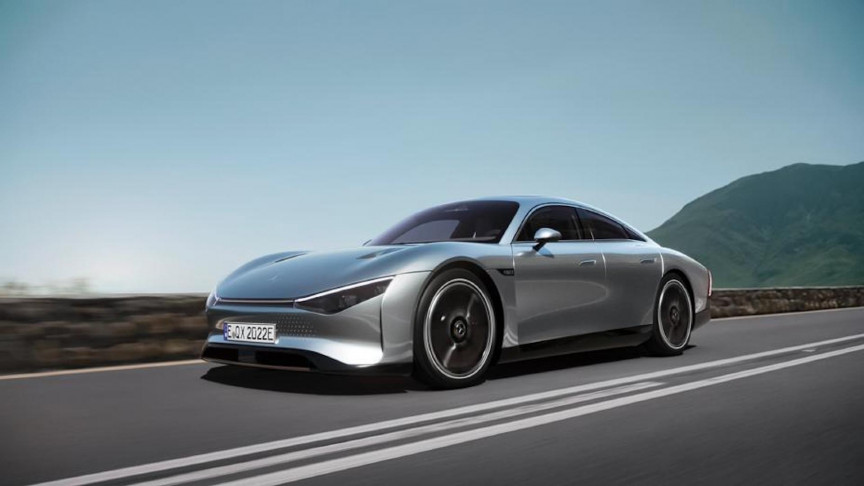 “Efficiency is the new currency,” said Mercedes-Benz R&D chief Markus Schäfer at the unveiling of the new Vision EQXX.

To reach that figure, the new luxury EV features a highly aerodynamic design as well as a lighter battery pack. The vehicle is also built with sustainability in mind and comes with mushroom-based vegan “leather” seats made using mycelium.

Mercedes already has a luxury EV sedan on the verge of entering the market, the 441-mile-range EQS. With the EQXX it promises to go further, achieving a drag coefficient of 0.17 compared to the EQS’s 0.20.

The batteries for the EQXX, meanwhile, are built using an anode with a higher silicon content than traditional alternatives, meaning they can store more energy and therefore be lighter, allowing for more efficiency. Mercedes explained in its press statement that its EQXX batteries are 50 percent smaller and 30 percent lighter than the ones featured in the EQS. Thanks to this innovation, the EQXX weighs 3,850 lbs (1,746 kg), which is about 1,600 lbs (725 kg) less than the EQS.

One of the standout features of Mercedes’s new luxury EV concept is its 117-cell solar panel roof, which charges ancillary systems in the car, allowing for extra range. The solar roof was developed as part of a collaboration with the Fraunhofer Institute for Solar Energy Systems ISE. According to Mercedes, on a day with ideal conditions, the solar roofing can add up to 15 miles (25 km) of range. As per Mercedes’s statement, this, as well as the battery innovations and aerodynamic design make the EQXX “the most efficient Mercedes-Benz ever built.”

Yesterday, Dutch Solar electric vehicle (SEV) firm Lightyear tweeted an acknowledgment that Mercedes has “joined the light side.” In an interview last year, the company’s CEO told us that its own Lightyear One model could already “drive for months” without being plugged in thanks to its solar panels. A solar roof on the latest luxury Mercedes concept lends credibility to the idea of SEVs, which have sometimes been disregarded due to the limitations of solar panel efficiency.

Though the EQXX is a concept vehicle, it’s worth pointing out that the EQS also started off as a show car, before it was confirmed for production. If it ever does go into production, the EQXX will set a new benchmark for EV range — currently, the world’s longest-range EV is Lucid Motors’ Lucid Air with an EPA-rated 520 miles (837 km) of range. For the time being, Mercedes’ Markus Schäfer only stated that “the technology program behind the VISION EQXX will define and enable future Mercedes-Benz models and features.”