The Long and Fascinating History of the Bicycle 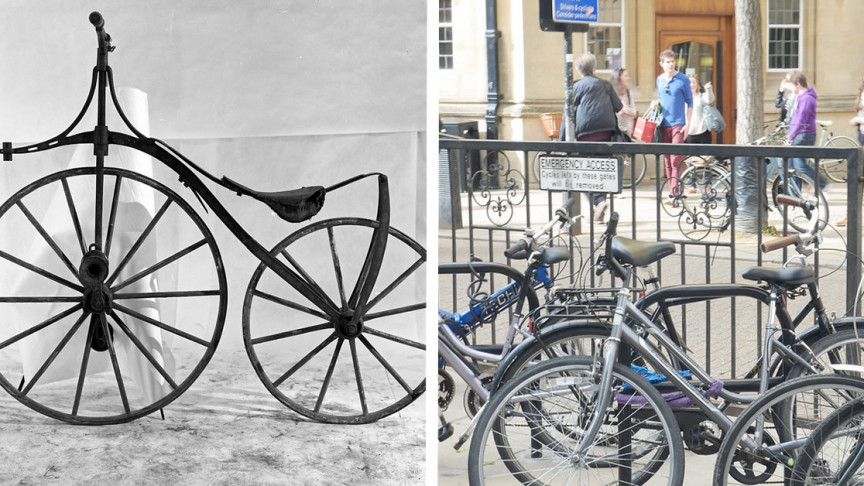 It would be hard to imagine a world without bicycles. They are everywhere, and chances are that most or all of you reading this can or have ridden one at some point in your life.

The history of this apparently simple mode of transport is a long and interesting one but the modern bicycle, as we know it, is actually a fairly new invention.

In this article, we’ll take a quick trip through time and stop off at some of the most important innovations (and hoaxes) throughout its development.

So adjust your seat and get ready to pedal. You are in for one fun ride!

Who invented the bicycle?

As you are about the find out, the answer to this question really depends on your definition of a bicycle. Do you mean a means of transport with just two wheels? Or do you mean what is commonly referred to as a bicycle today with pedals, and chains, and pneumatic tires?

If the former, the original inventor could be considered Giacomo Caprotti. Caprotti was a student of Leonardo da Vinci and is widely considered the first inventor of an early bicycle. If the latter, then the first “true” bicycle is probably the Rover Safety bicycle.

Invented by Harry John Lawson (and later refined by  John Kemp Starley), the Rover had all the main features of modern bicycles. In fact, it was the template for most modern bikes.

What are some of the main milestones in bicycle history?

And so, without further ado, here are some of the major milestones in the history of the development of the bicycle. This list is far from exhaustive and is in no particular order.

1. A bicycle is nothing without the wheels

There’s nothing that is more important to a bicycle than the wheel. Or, more precisely, a wheel and an axle. Just when this simple yet powerful combination was invented is hotly debated, but historians generally agree it originated in Mesopotamia sometime around 3500 BC. The oldest surviving example, which was found in Ur, in modern-day Iraq, dates to approximately 3100 BC.

The earliest free-spinning wheels were used as potters wheels. It took another 300 years or so for someone to figure out how to attach them to chariots. The uses for the wheel and axle combination would remain relatively unchanged for millennia until the Industrial Revolution making human-powered wheeled devices more practical.

Back in 2010, a Chinese historian produced a recreation of what he believes might have been developed 2500 years ago by a Chinese inventor Lu Ban. This is supposed to have been a large wooden device with complicated gears and pedals to make it move and was, technically speaking, a tricycle.

His findings are yet to be verified and accepted by his peers but this is certainly an interesting device.

Year: Prehistory to the Roman Empire and beyond

Wheeled transportation is nothing without a fairly level and smooth surface to run on. Resistance to motion varies widely depending on the surface on which it travels, with rough surfaces much harder to move along than smooth ones.

The Romans were some of the first peoples to develop a largescale network of “paved” roads. John McAdam would further improve road technology many centuries later – literally paving the way for the viability of bicycle technology shortly after.

4. Leonardo da Vinci’s pupil might have invented the bike

For some time now there has been a debate around whether Giacomo Caprotti (a student of Leonardo da Vinci) might have made a sketch of a bicycle-like device back in 1534. The authenticity of this evidence has been called into question by many prominent historians, but others attest to its validity.

Although not strictly speaking a bicycle, the Celerifere could be considered an early precursor. It was supposedly developed by Comte Mede de Sivrac in 1790 in France – but its existence may also have been a hoax.

Most bicycle historians tend to err on the side of caution and believe it never actually existed. The general consensus seems to be that it was made up during the 19th Century by a French bicycle historian Louis Baudry de Saunier.

It was said to have lacked any steering, and had no pedals, but did ostensibly resemble the technology that would later become known as the bicycle.

RELATED: THE HISTORY AND EVOLUTION OF THE WHEEL

The Celerifere, according to stories, had four wheels (though some have suggested just two) and a seat and was powered by the rider, using their feet to walk or run to push off, and then glide for a short distance.

In 1815 Mount Tambora erupted in modern-day Indonesia. This turned out to be one of the largest volcanic eruptions in Earth’s history.

This cataclysmic event pumped so much ejecta into the Earth’s atmosphere that global temperatures fell, leading to crop failures, famine, and the starvation of horses and livestock around the northern hemisphere the following year.

At this time there were very few alternatives to animal-power for transportation and so a new, less famine-sensitive transport method was urgently needed – the gauntlet has been thrown down.

7. The Laufmaschine (Draisienne) comes to the rescue, sort of

The Laufmaschine (Draisienne in French), aka the “Running Machine” or “Hobby Horse”, was invented by Baron Karl Von Drais – a German inventor. Although it might be unrecognizable today as a bicycle next to modern examples, it did consist of a frame with two wheels.

The “Running Machine” was propelled by the operator, who was effectively walking whilst seated. This allowed for a sort of ‘gliding’ walking or running experience.

The front wheel assembly also had a handlebar that was hinged to allow for a small amount of steering. Several manufacturers in France and England made their own versions during its brief popularity in the summer of 1819.

Owing to the design of the device its utility was restricted to paved areas rather than rough roads.

8. The first mechanically propelled bikes might have been Scottish

There is some evidence, though weak, that a Scottish Blacksmith, Kirkpatrick MacMillan, might have developed the first mechanically propelled two-wheeled vehicle. Claims made by his nephew were put forward at the time about a rear-wheel-drive system powered by mid-mounted treadles connected by rods to a rear crank (similar to locomotives).

Whether MacMillan’s creation was true or not, the first documented producer of rod-driven two-wheelers, called treadle bicycles, was one Thomas McCall in 1869.

The Velocipede was a two-wheeled bicycle that came with pedals and cranks on its front wheel. It consisted of a combination of a wooden frame with metal tires that made for a very uncomfortable ride over cobbled streets.

It was invented in France sometime in the 1860s and was first manufactured by the Michaux Company between 1867 and 1869. The Velocipede would fall out of favor relatively quickly.

Because of its design, the device quickly earned the nickname of “Boneshaker” – a good description of what it was like to ride.

Inspired by the success of the “Boneshaker”, Eugène Meyer decided to improve on the design. This led to the creation of the high-wheeler bicycle that incorporated one large front wheel and one smaller, wire-spoked rear wheel.

The high wheel allowed the rider to travel farther with a single rotation of the pedals.

This was the first model to be officially known as a bicycle and was very popular between the 1870s and 1880s. Its metal frame and rubber tires provided a more comfortable ride than the boneshaker.

In Britain, it became known as the “Penny Farthing” after its resemblance to the British penny and farthing coins, one much larger than the other, so that the side view resembled a penny leading a farthing.

In 1876, Englishman Harry John Lawson invented the revolutionary Safety bicycle. This bike featured a strong metal chain driven by two pedals, along with two equally-sized wheels, and a frame very similar to that of the modern bicycle.

The true bicycle was born.

Lawson’s model failed to catch on because of its relatively higher price tag compared to its contemporaries. Later, another Englishman, John Kemp Starley, developed the first commercially-successful version, the Rover.

Early marketing for these bicycles focussed on their relative “safety” when compared to their predecessors – and to great success. The bike also featured direct steering, another safety feature that proved to be very popular.

In 1888, Irish inventor, John Boyd Dunlop, came up with the clever idea of filling rubber tires with air to provide a smoother ride than existing solid-rubber tires.

Like many important inventions, Dunlop’s was born from a problem very close to his heart. His son had been prescribed a dose of cycling to help with his heavy cold by a doctor.

Dunlop noticed that his son’s ride was very uncomfortable, and decided to make it a little easier. He fitted his bike with tires made of canvas bonded with liquid rubber – and quickly patented the invention.

His invention soon caught on and was given a boost by the famous cyclist, Willie Hume, who became the first to adopt Dunlop’s tires for racing events. The rest is history.

13. The 20th Century saw an explosion in bike designs

The 20th Century saw an explosion in bicycle designs, though all were, at their heart, simple variations on the Safety bicycle. Minor additions were made to the bicycle design, from gearing to suspension, and there were also improvements to tire designs, like the addition of different styles of treads.

During the 1970s, the so-called “Bicycle Boom” occurred in America, as the general public became aware of the value of exercise and energy-efficient transportation.

Bicycles also became lighter and stronger, as well as more aerodynamic in design. Notable design innovations included the recumbent bicycle, BMX, and mountain bikes, with the latter being one of the first to free bicycles from the need for smooth paved surfaces.

Over the last few years, there has been a growing trend towards the specialization of bike designs. This has led to the growth in so-called hybrid/city/cross bikes designs that combine elements of road racing and mountain bikes.

Hybrid bicycles and commuter bicycles can range from fast and light racing-type bicycles with flat bars and other minimal concessions to casual use, to wider-tired bikes designed primarily for comfort, load-carrying, and increased versatility over a range of different road surfaces.

Electric bikes have also become more popular of late – a trend that is unlikely to slow down in the future.

And that, as they say, is all folks. Have we missed any other critical events in the history of the bicycle? If so, feel free to mention them in the comments.